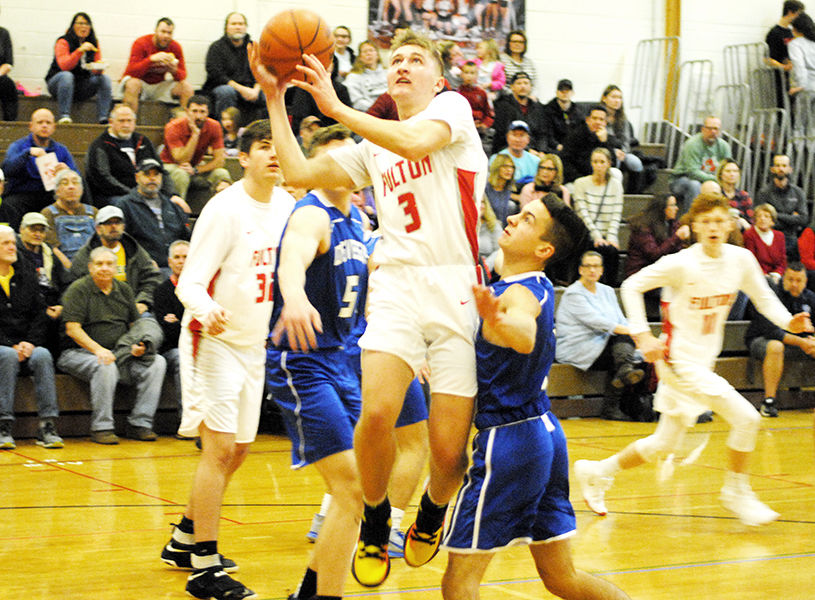 Fulton's Seth Grimshaw goes in for the layup in a rivalry matchup against Oswego Wednesday. 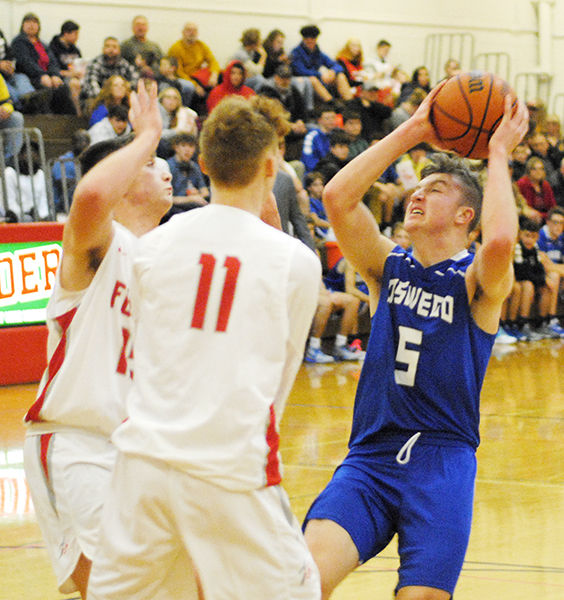 Fulton's Seth Grimshaw goes in for the layup in a rivalry matchup against Oswego Wednesday.

“What a way to open up the season,” Fulton head coach Sean Broderick said. “I couldn’t be more proud of our guys.”

Oswego head coach James Lamacchia said, “We know each other well. I knew coming in here what we were going up against.”

Grimshaw was 13-of-17 from the free-throw line, which played a part in some late-game theatrics for the Raiders. Jack Broderick chipped in 16 points, and Marcus Shepard added 10 points.

Fulton was playing shorthanded since its starting guard, Dominic Abbott, out with an injury. Despite being a man down, the Raiders played through, leading to Broderick expressing how he “loved every second” of the matchup against the Bucs.

“We’re playing a little undermanned now, with not as many practices needed to be good,” he said. “These guys hung in there and battled.”

Lamacchia said, “That was a huge difference for them, coming in and facing adversity.”

Fulton went into the fourth quarter with a 48-40 lead. Up 50-43 following a two-point basket from Sam Cotton, the Raiders quickly saw the momentum shift over to the Bucs’ side.

Carson sank a three-pointer from the right corner, and Douglas tossed in a two-pointer to slice the deficit to 50-48. Johnston, darting down the court on a fast break, went in for the layup to tie the game at 50-50.

Anthony Carter made a free throw on a 1-and-1 opportunity to give Fulton a 51-50 lead. Then with a little over 40 seconds left in regulation, Douglas muscled through Fulton defenders and tabbed a two-point shot, putting Oswego up 52-51.

Grimshaw hit a couple of clutch free throws to hand Fulton the lead back at 53-52 with 16.5 seconds to go. Douglas, however, came through once again with a two-pointer with 7.1 seconds left on the clock — and the Bucs had a 54-53 advantage.

Less than four seconds to go, Grimshaw tallied another free throw, knotting the score at 54 and forcing OT.

Douglas kicked things off in OT with a long three-pointer for a 57-54 score in favor of the Bucs.

Fulton quickly tied it up at 57-57, and Grimshaw gave the Raiders the lead at 59-57 with a two-point basket. The Raiders then proceeded to go on a 7-0 run to take a commanding 64-57 lead, with all the points scored from Grimshaw on two shots and three free throws.

“Seth really took over the game. He wanted to take over,” Broderick said. “I was lucky to be coaching in this game, but there was just an unbelievable amount of heart from these players.”

Lamacchia mentioned how the intensity of the fourth quarter led to the Bucs’ dry spell in OT.

“We have to fine tune our emotions and keep things in check,” he said.

Fulton led 20-14 following the first quarter. The Raiders’ advantage jumped to 14-6 at one point off of a three-pointer from Jack Broderick.

In the second quarter, Fulton was hanging on to a 23-21 lead then went on a small 4-0 run to go up 27-21. This led to Lamacchia calling multiple timeouts in the quarter so the Bucs could regroup.

“We couldn’t keep the ball in front,” he said. “I didn’t have any of my zones in and played straight man-to-man. We did what we could.”

Oswego’s offensive attack came alive toward the end of the first half. Douglas hit a three-pointer, Garrett Besaw knocked a couple of free throws and Johnston racked up four points. A late second-quarter push saw the score tied at 35-35 heading into halftime.

Both teams struggled a bit with their shots in the third quarter. Fulton did, however, go on an overlooked 9-0 run to take a 44-35 lead.

The Raiders defense played a big part in the third quarter, keeping the Bucs scoreless until Johnston made a layup at 1:38. Oswego’s defense then managed to keep Fulton in check the rest of the quarter.

“They know how to guard us,” Broderick said. “They know what we’re doing, we know what they’re doing. We had to fight for every basket.”

The rivalry matchup between Fulton and Oswego had both benches and spectators fired up on almost every basket. There were a few heated moments, but the teams gave each other plenty of love after a hard-fought showdown.

“We have a lot of respect for Oswego,” Broderick said.

Lamacchia said, “(Coach Broderick) does a great job with the program. Hats off to them. They executed and kept their composure.”

Fulton is at East Syracuse-Minoa on Tuesday for a matchup against the Spartans. The game starts at 6:45 p.m.

Oswego’s next game is its home opener against Cortland on Friday. Tip-off is set for 6:45 p.m.