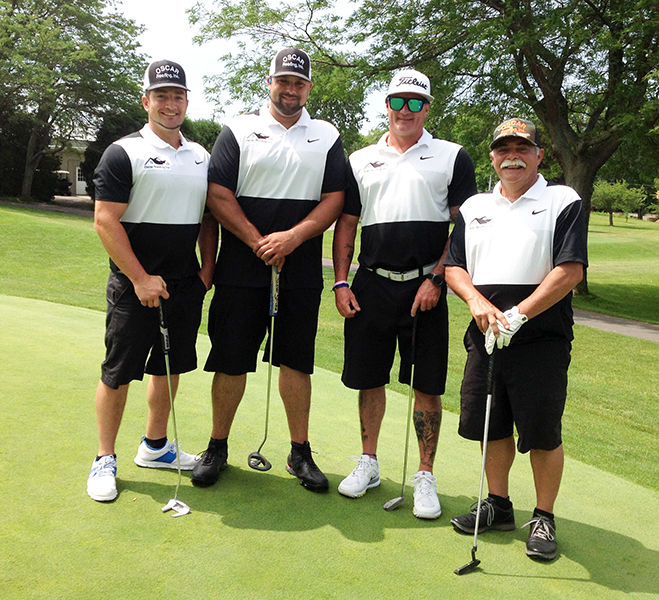 The Oscar Roofing team carded a 58 to capture first place in the morning flight of the United Way of Greater Oswego County’s Golf Tournament held recently at the Oswego Country Club. Team members Ted Knopp, Shane Murray, Anthony Woods, and Geno Knopp (pictured left to right) also won a skin for an eagle on the 10th hole. Oscar Roofing was one of 37 teams that supported the United Way’s mission by participating in the annual fundraiser. 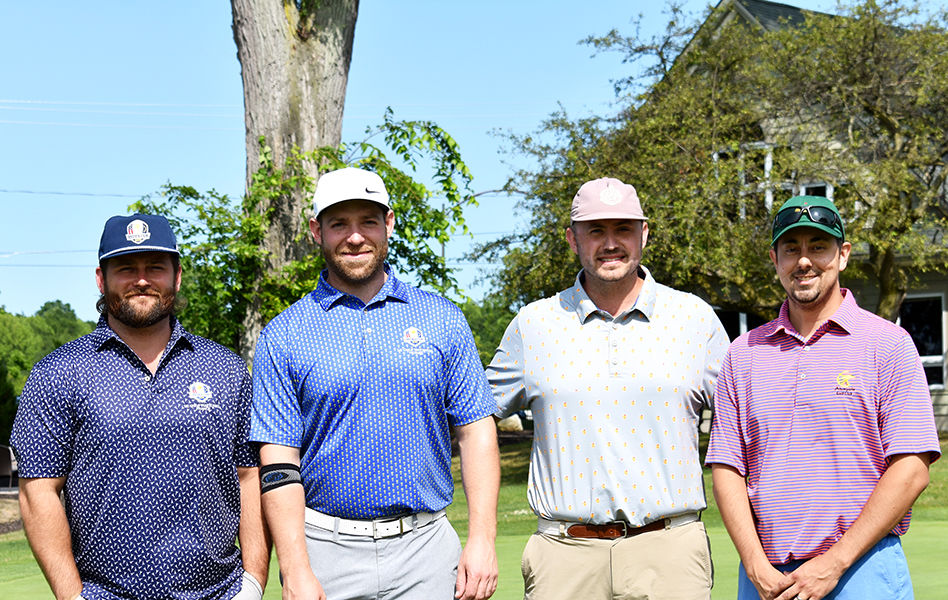 The Oscar Roofing team carded a 58 to capture first place in the morning flight of the United Way of Greater Oswego County’s Golf Tournament held recently at the Oswego Country Club. Team members Ted Knopp, Shane Murray, Anthony Woods, and Geno Knopp (pictured left to right) also won a skin for an eagle on the 10th hole. Oscar Roofing was one of 37 teams that supported the United Way’s mission by participating in the annual fundraiser.

OSWEGO — Sunny skies and a pristine course greeted golfers who participated in the 24th annual United Way Golf Tournament on Monday at the Oswego Country Club.

The tournament featured a morning and an afternoon flight, allowing for a total of 37 teams to participate throughout the day.

The first and second-place teams for the morning flight received tied scores of 58, but Oscar Roofing was awarded the win after comparing the handicaps for the most challenging holes on course. Second place was awarded to the IBEW Local 43 team.

The Eagle Beverage team took home first place for the afternoon flight with an impressive 16 under score of 55. They were followed by Oscar Roofing’s second team of the day with a score of 57.

In the afternoon flight, Bill Buske and Diane Lowry (fourth hole), and Bob Mazurowski and Lynne Eggert (12th hole) were closest to the pin victors. The longest drive winners on the first hole were Kevin Dorsey and Eggert, and the Novelis men’s team won the putting contest. Afternoon skins winners included Danno’s Deacons with birdies on the fourth and eighth holes, and Financial Partners of Upstate New York with an eagle on the 10th hole.

“We could not have asked for a better day,” Lexie Wallace said, United Way resource development director. “The event ran smoothly mostly thanks to the guidance of our tournament planning committee, which includes John Nelson, Lynne Eggert, Dave Lloyd, and Rich Godden. They have volunteered their time for months leading up to the event to help with everything from outlining the course games to choosing prizes for our winners.”

Wallace also said the event’s success was made possible with endless support from the Oswego Country Club staff and restaurant.

“Course Superintendent Scott Peters and his team truly made sure the course was perfect for our event,” she said. “Golf Pro Ryne Varney and Assistant Pro Mike Hogan could not have been more helpful through every step of the planning process and the day-of tasks. We also appreciate all of the work LaP&T staff Ray Jock, Kim Jock, Tammy Murphy, and their team put into making sure our golfers received a prompt and delicious gourmet meal.”

According to Wallace, more than 30 volunteers gave their time throughout the day to help with checking-in golfers, running on course games, and selling raffle tickets.

“This day would not have been possible without the many individuals who donated their time to support our event,” she said. “We had volunteers helping us from sunrise to sunset. Not only did they help with the physical tasks of running games and setting up tee signs, but they also added to the positive energy of the day by greeting each challenge with a smile. They were truly the driving force behind the tournament.”

Wallace said the annual golf tournament is the United Way’s largest fundraising event of the year, and support from these local businesses and individuals help to make a difference in the lives of thousands of Oswego County residents.

“Last year alone, United Way partner agencies provided more than 150,000 meals and assisted over 13,800 people in accessing the tools they need to lead healthier and happier lives,” she said. “We are thankful for all of the sponsors and teams that participated in our golf tournament because their support truly helps our mission of ending hunger, building successful youth, and ensuring wellness across Oswego County.”

To learn more about the United Way of Oswego County, or to view more pictures from the 24th annual Golf Tournament, follow the organization on Facebook by searching @OswegoUnitedWay.