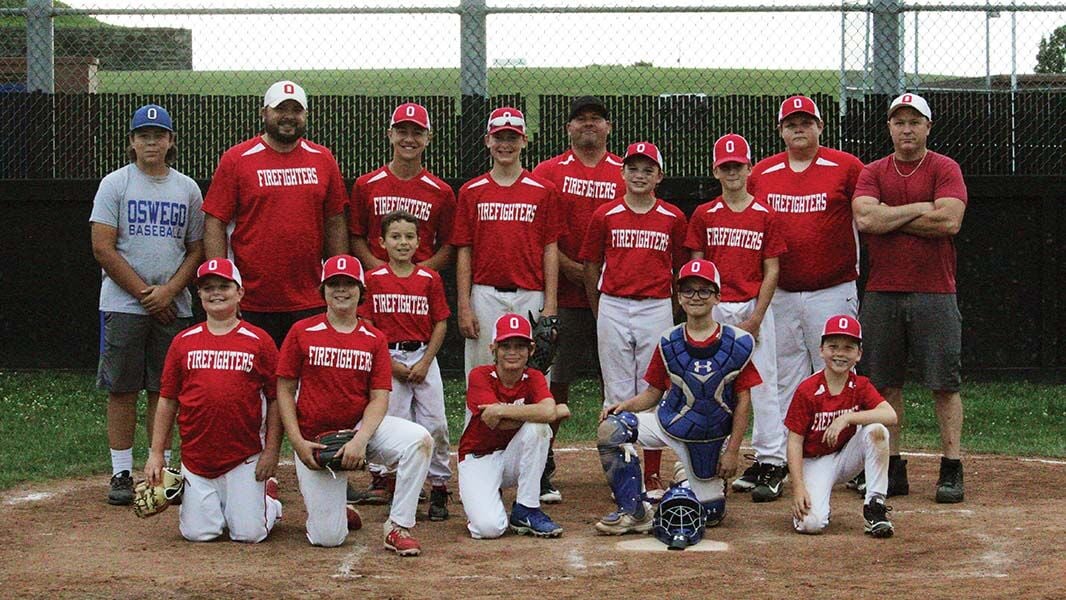 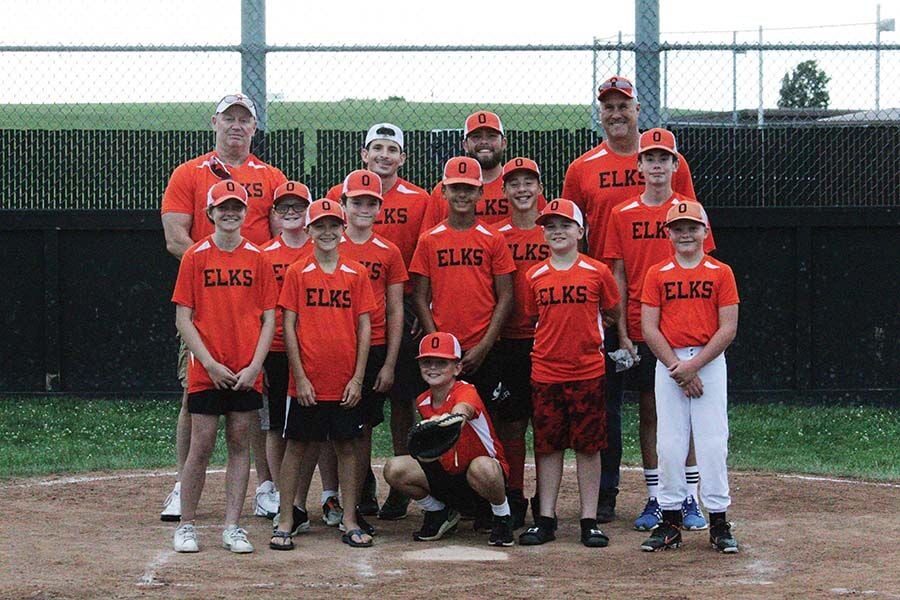 The Elks were the Oswego Little League Majors Division regular season champions with a record of 11-4. While the overall record was tied with the Firefighters, the Elks won the tiebreaker with the better head-to-head record. In the back row are coaches, from left to right, Brian Kelly, Tyler Perez, Nick Perez, and Shane Stepien. In the middle row are Abbie Ohnmacht, Nate Freebern, Nolan Sweet, Grady King, Deatyne Westberry, Luis Correa, Matthew Belawske, Connor Kelly, and Shane Baldwin. Crouching down is Connor Stepien.

The Elks were the Oswego Little League Majors Division regular season champions with a record of 11-4. While the overall record was tied with the Firefighters, the Elks won the tiebreaker with the better head-to-head record. In the back row are coaches, from left to right, Brian Kelly, Tyler Perez, Nick Perez, and Shane Stepien. In the middle row are Abbie Ohnmacht, Nate Freebern, Nolan Sweet, Grady King, Deatyne Westberry, Luis Correa, Matthew Belawske, Connor Kelly, and Shane Baldwin. Crouching down is Connor Stepien.

OSWEGO — The pitching duo of Eddie Kuzawski and Gavin Guynn threw a combined 14 strikeouts, with the Firefighters cruising to a 10-2 win over the Police to win the Oswego Little League Majors Division championship series.

The Firefighters swept the best-of-three series to take home the 2021 title.

While the Police opened the scoring in the first inning after Brett DeGrenier crossed home plate following a passed ball, the Firefighters utilized some multi-base hits for an early lead. Owen Bartlett got things started with a single, followed by an RBI double from Xavier Burdick and an RBI triple from Kuzawski, who also scored on a passed ball, to give the Firefighters a 3-1 lead.

Both teams threatened to score multiple times in the second, third and fourth innings, but the pitching prowess of Kuzawski and DeGrenier kept the teams’ bats at bay.

Kuzawski threw eight strikeouts in the three innings, allowing just two hits and stranding a few runners on base. DeGrenier had to get out of a few more tough situations but still struck out five batters in the same time frame. He stranded the bases loaded in the second inning after forcing a pop out to second base, and left runners on second and third base in the fourth inning after Tyler Huynh caught a line out for the third out.

The Firefighters increased their lead in the fifth inning, adding two more runs after Kuzawski and reached on an error and Guynn hit a deep triple in the left-center field gap. Guynn’s triple hit home Kuzawski, while Ryan Deary brought home Guynn but grounded out.

After Kuzawski walked the first three batters of the bottom of the fifth, Guynn came on in relief. He struck out the first batter he faced, but then Jack Dewey and DeGrenier were both caught trying to steal home. Bartlett, who was playing behind the plate for the Firefighters, tried to pick off DeGrenier at third after throwing the ball to Kuzawski, who eventually caught up to DeGrenier to tag him before reaching home plate for the final out of the inning.

DeGrenier struck out the first batter of the sixth inning, but an error on a dropped-third strike allowed J.J. Greene to reach first base safely. Logan Cavallier relieved DeGrenier, getting the next two outs. Cavallier did give up an inside-the-park grand slam to Kuzawski. Following the second out, a fly out to left field, Emmet Searor recorded a strikeout but again the batter, Easton Broadwell, reached first base safely. He was thrown out trying to steal second to end the inning.

Guynn allowed a leadoff walk to Aiden Reynolds, who stole both second and third base, then scored on an RBI groundout from Cole Levea. Guynn recorded two strikeouts to send the Firefighters’ baseball caps and gloves flying in the air in celebration after winning the championship 10-2.

At the plate for the Firefighters, Kuzawski had an inside-the-park grand slam, a triple, five RBIs and three runs. Bartlett added three triples, two runs and an RBI. Xavier Burdick had a double, RBI and a run, while brother Brody Burdick tacked on a single and a run. Guynn recorded a triple, RBI and a run and Greene had a single and run, too. Elijah Brown and Easton Broadwell both reached first base safely, while Ryan Deary had an RBI in the contest.

The Police’s offense was led by DeGrenier, who hit a triple and scored a run. Huynh and Reynolds both recorded singles. Reynolds rounded out scoring for the Police. Levea also recorded an RBI, while Farrell and Dewey also reached first base safely in the game.

DeGrenier started the game, and threw for five innings striking out 10 batters in the process. He allowed six runs on six hits and three walks. Cavallier recorded two outs in the sixth inning, striking out a batter, while allowing three hits, a walk and four run. Searor threw a strikeout in the contest.