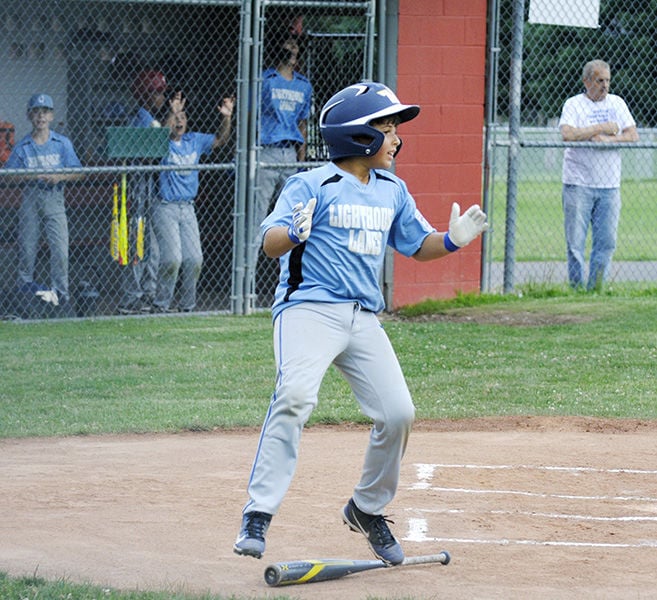 Mikey Conzone celebrates after scoring the first run of the game for Lighthouse Lanes on Tuesday against the Elks Lodge in Oswego Little League Majors Division championship series action. 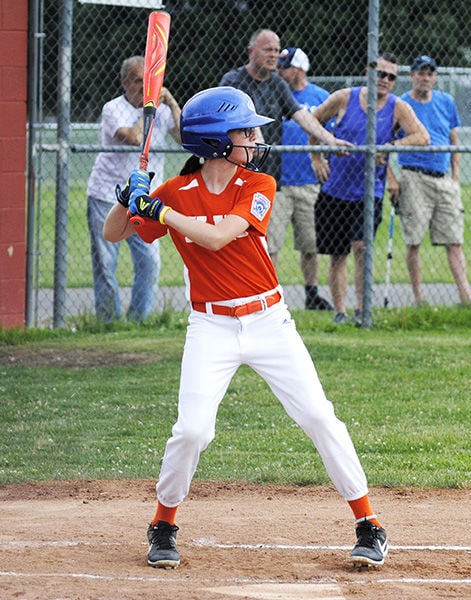 Pictured is Emery O'Brien at the plate for Elks on Tuesday.

Mikey Conzone celebrates after scoring the first run of the game for Lighthouse Lanes on Tuesday against the Elks Lodge in Oswego Little League Majors Division championship series action.

Pictured is Emery O'Brien at the plate for Elks on Tuesday.

OSWEGO — Following a loss in game one, second-seeded Lighthouse Lanes bounced back with a 5-4 walk-off victory over top-seeded Elks Lodge on Tuesday in the Oswego Little League Majors Division baseball championship series.

Noah Bwalya delivered a game-winning single in the bottom of the sixth to cap a come-from-behind win for Lighthouse Lanes.

Lighthouse Lanes and Elks Lodge now face each other in a decisive game three on Friday at 6 p.m. at Lagoe Field. The winner of this game will be crowned Majors Division playoff champions.

Mikey Conzone walked four times and scored three runs for Lighthouse Lanes. Owen Sincavage tripled, walked, scored, and knocked in a run. Owen Seubert collected two singles, scored a run and drove in a run. Bwalya chipped in two singles, walked, and had an RBI. Charlie Cherchio had a single and an RBI, Isaac Michalski singled, and Michael Kenyon walked.

Seubert tossed two innings of relief, fanning four and giving up five walks and a hit. Thompson picked up the win, throwing two-thirds of an inning and giving up a hit.

Roy was the starting pitcher for the Elks. He allowed four runs, six hits and three walks while striking out eight. Callen was tagged with the loss in two innings of relief, striking out one and allowing three walks, two hits, and a run.

Lighthouse Lanes began the scoring in the bottom of the first inning. Conzone walked and later scored on a soft single by Seubert. After Bwalya singled to right field, Cherchio singled home Seubert to bump the score to 2-0.

The Elks took the lead in the top of the third. Kirwan smacked a deep double to center field, Naumann walked, and Roy singled up the middle to plate Kirwan. With one out, Callen’s RBI groundout made it 2-2. O’Brien then hit a single to center field, scoring Roy to give the Elks a 3-2 lead.

In the top of the fourth, the Elks Lodge added to its lead. With one out, Kirwan, Naumann, and Roy walked to load the bases. Kirwan was forced out at home after a groundout, but Callen walked to drive in Naumann, making it 4-2.

Lighthouse Lanes answered in the bottom of the fourth. Conzone walked and scored when Sincavage drilled a triple over the right fielder’s head. Seubert then legged out an infield single, which scored Sincavage and tied the game at 4-4.

In the bottom of the sixth, Lighthouse Lanes finished off the Elks. Conzone and Sincavage walked and Seubert was hit by a pitch to load the bases. Bwalya then came through in the clutch with a walk-off single that scored Conzone.