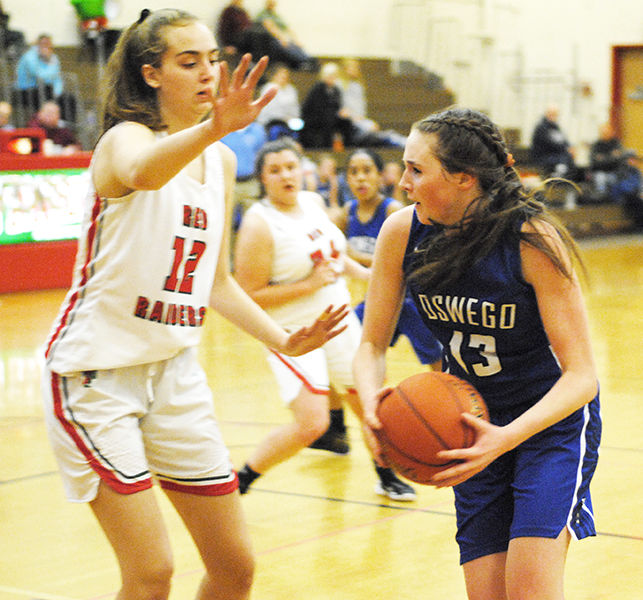 Oswego's Mary Culeton (right) looks to pass in a matchup against Fulton on Tuesday. 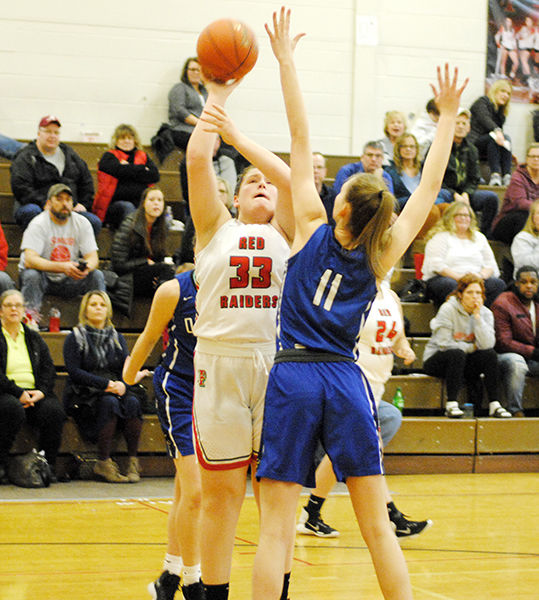 Fulton's Bernadette DeMott looks to put up a 2-point basket on Tuesday against Oswego.

Oswego's Mary Culeton (right) looks to pass in a matchup against Fulton on Tuesday.

Fulton's Bernadette DeMott looks to put up a 2-point basket on Tuesday against Oswego.

FULTON — Caitlin Lilly tossed in 20 points as the Oswego varsity girls basketball team defeated Fulton by a score of 44-34 on Tuesday.

Prior to the game, the Lady Raider seniors Brittney Baum, Bernadette DeMott, Madison Gilmore, Ashley Jackson and Alicia Merritt were honored during Senior Night for their time with the program.

Oswego had a comfortable 23-10 lead at the half. At the beginning of the third quarter, Hannah Holland drilled a 3-pointer to make it 26-10 Lady Bucs.

Shortly after, the Lady Raiders went on the comeback trail. Gilmore and Jackson sank four three throws between the two of them, and Merritt knocked down a hooking 3-point shot to slice the deficit to 26-17.

The Lady Raiders looked to be in good position to take the lead, but Oswego got the lead back at 32-28 when Culeton got the 2-point basket and Lilly tallied two free throws.

Before the third quarter came to a close, Colon banked home a 3-pointer from the left corner. Heading into the fourth quarter, Oswego was maintaining a 38-30 advantage.

Oswego squeezed out a 6-4 run in a quiet fourth to keep its lead intact. Meg Albright and Lilly each had 2-pointers in the quarter, and Culeton and Holland knocked down free throws. DeMott and DeMott had buckets for the Lady Raiders.

The Lady Bucs had a 5-3 lead midway through the first quarter. Jackson then knotted the score at 5-5 on a hard-fought 2-pointer from under the basket.

The rest of the first saw Lilly carry Oswego with six points, with a couple of 2-pointers and a three at the top of the key. At the end of the first, Oswego was up 12-6.

At the start of the second quarter, Gilmore put in a quick basket for Fulton to slice the score to 12-8.

Further into the second, Oswego took over. The Lady Bucs ignited a 7-0 run on a three from Colon and a two from Lilly. Oswego finished off the spurt when Hailey Babcock went up for a bucket on a nifty pass from Culeton. Following the offensive explosion, it was 19-8 Oswego.

The Lady Bucs wrap up the regular season this Thursday with a home game against Cortland. Tip-off against the Lady Purple Tigers is scheduled for 6:45 p.m.

Fulton is at Auburn on Thursday. The game is set to start at 6:30 p.m.