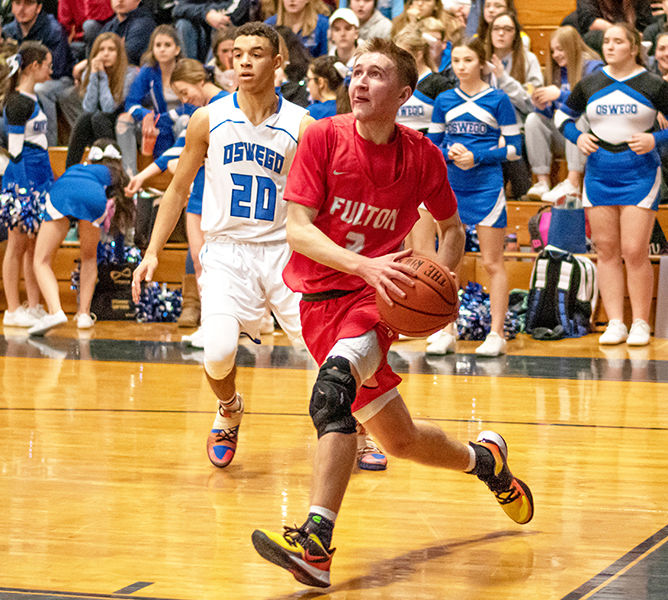 Fulton's Seth Grimshaw (right) drives to the basket in a rivalry matchup against Oswego on Tuesday. 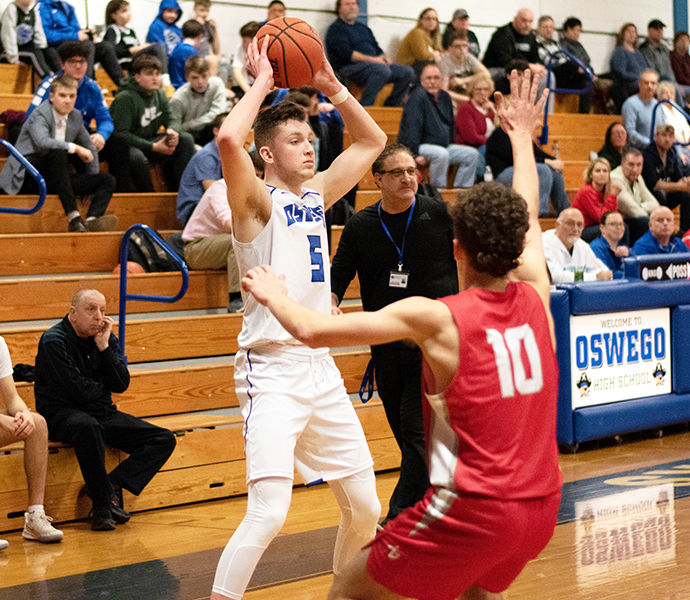 Oswego's Mike Douglas (left) looks to pass to one of his teammates on Tuesday against Fulton.

Fulton's Seth Grimshaw (right) drives to the basket in a rivalry matchup against Oswego on Tuesday.

Oswego's Mike Douglas (left) looks to pass to one of his teammates on Tuesday against Fulton.

OSWEGO — Seth Grimshaw erupted for 32 points, including four 3-pointers, to lead the Fulton varsity boys basketball team (11-7) to a 60-57 victory over rival Oswego (4-14) Tuesday during Senior Night at Powers Gymnasium.

Before the game, Oswego seniors Garrett Besaw and Riley Mahoney were honored in a ceremony for their time with the Buccaneers’ program.

Fulton was down 46-38 heading into the fourth quarter when Grimshaw scored 18 of the teams 22 points to lead the comeback for the Raiders. Dominic Abbott scored 11 points, and Jake Broderick added seven points of his own in the win.

For the Buccaneers, Mike Douglas finished with 16 points. Keyon Johnston chipped in 13 points, and Besaw added eight points. Matthew Callen had seven points of his own in the first half before going down with an ankle injury late in the second quarter. He would not return to the game.

After a back and forth first half, the Buccaneers took a 35-30 lead into the break despite missing eight free throws.

The second half began with an 8-2 run from Oswego, giving them its biggest lead of the night of 10 by a score of 44-34. A resilient Fulton team, however, would make sure to keep this one close.

Quickly out of the gates in the fourth quarter, Grimshaw hit a 3-pointer to cut the lead to five and the comeback was on for the Raiders. Midway through the quarter, the Buccaneers led 53-45. Grimshaw would then score 13 of the next 15 points for the Raiders as they went on a 15-4 run.

The Raiders then found themselves with their first lead of the game since leading 24-22 in the second quarter as they led 56-55 under two minutes to play.

With under a minute to go in the game, the Raiders led 58-55 when Douglas put in a floater for the Bucs to cut the lead to one. Oswego was then forced to foul under 30 seconds remaining in the game. Grimshaw hit both free throws and the Raiders led 60-57.

A timeout was taken for the Bucs as they wanted to make most of the opportunity to tie the game. Out of the timeout, the Buccaneers moved the ball around the perimeter, eventually finding Cole Pratt, who took a shot and missed a 3-pointer. The miss, however, was rebounded by Riley Mahoney, leading to another Bucs timeout with 1.3 seconds remaining on the clock.

Following the timeout, it looked as if the play was drawn up for Pratt as he came off several screens trying to find him an open in the opposite corner.

However, great defense by the Raiders denied that chance. The in-bound pass from Johnston then found its way into the hands of Brady Carson, who shot a 3-pointer that bounced off the rim as the buzzer went off. Fulton escaped with the win.

Fulton welcomes Auburn to town on Friday. Game time is set for 6:30 p.m.