Anglers are pictured above Friday at the Oswego River’s Varick Dam. The river, along with other local tributaries to Lake Ontario, are peaking for the annual salmon run. 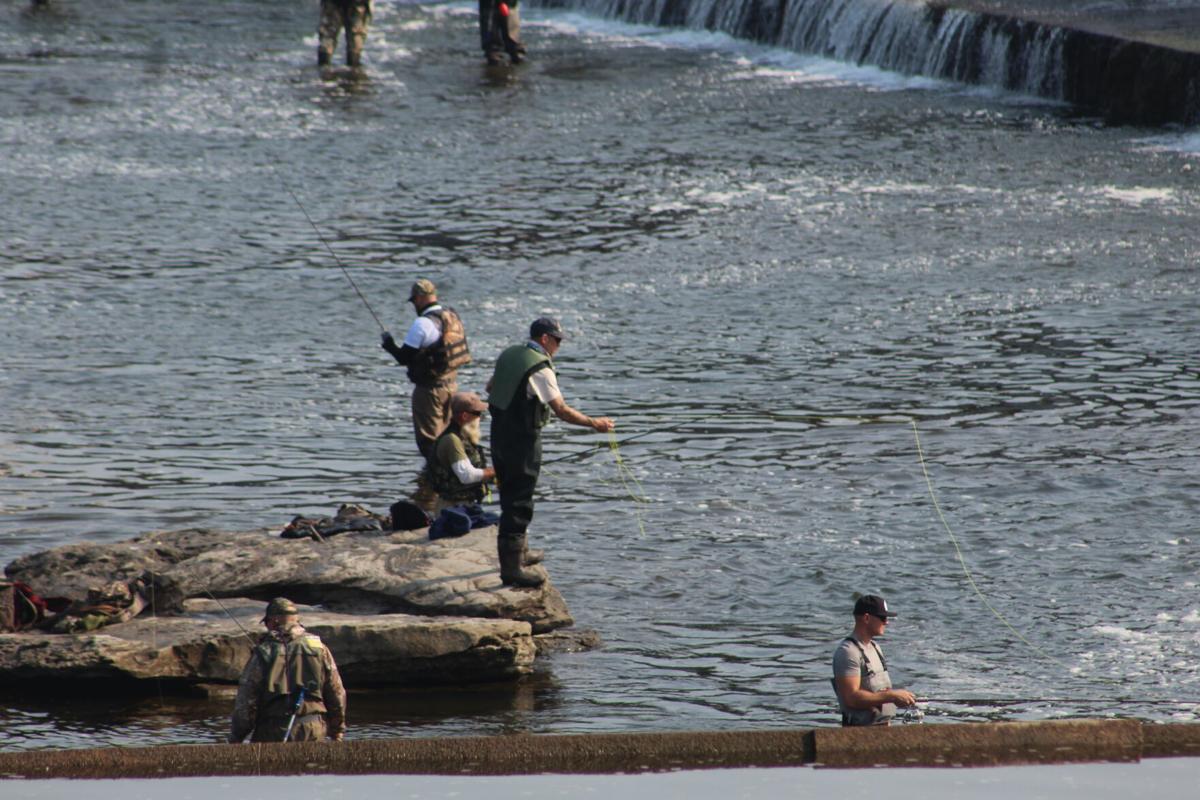 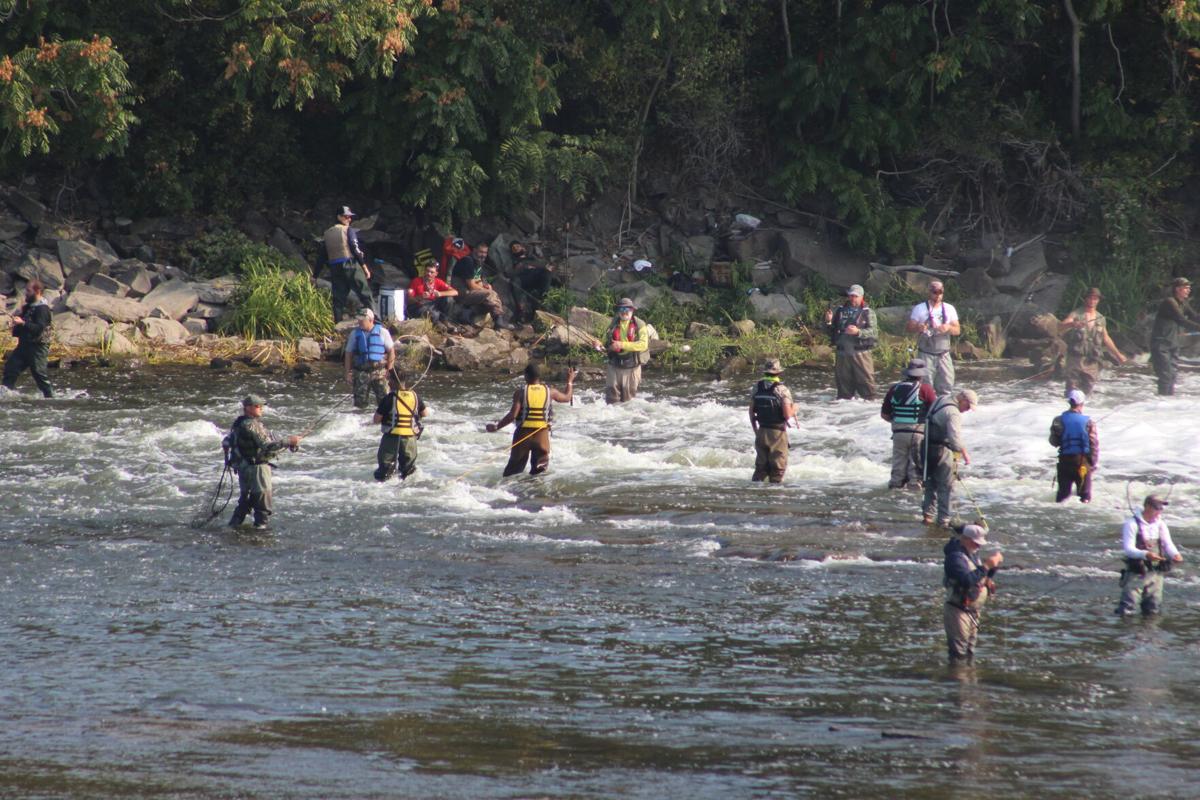 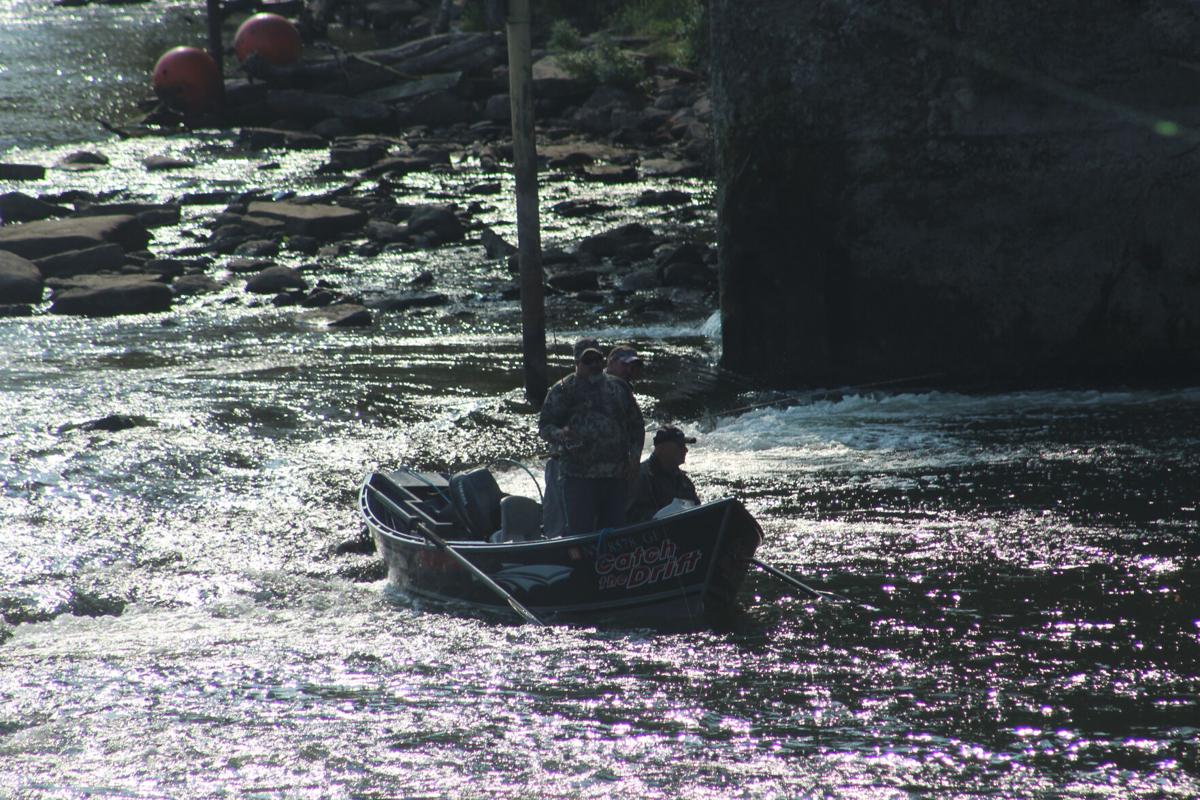 Anglers are pictured above Friday at the Oswego River’s Varick Dam. The river, along with other local tributaries to Lake Ontario, are peaking for the annual salmon run.

Each autumn as the Lake Ontario water temperature drops, salmon return to their spawning grounds as they reach the end of their life cycle. For city anglers, that means large schools of salmon to be found at the mouth of the Oswego River and farther upstream at the Varick Dam.

Bring your J-plugs, flashes, flies, egg sacs, skein and cut-bait because when the salmon begin to run, you’ll need plenty of tackle to fit in among the shoulder-to-shoulder groups that descend upon the Oswego River’s sweet spots and honey holes. Although the COVID-19 pandemic has affected some aspects of the salmon run, local experts and officials say people are still searching for the big one.

“It’s like shooting fish in a barrel,” said Captain Andy Bliss, not without a mild tone of dismissal. Bliss runs Chasin’ Tail Adventures, a fishing charter outfit renown regionally for its successful expeditions. This is his busy season.

“Eat, sleep, fish,” is how he describes his days and nights. As the late summer heat turns into the cool of fall, Bliss is at the helm for 12-14 hours per day.

“The whole season in the Oswego area is based on August, September, October and November,” Bliss told The Palladium-Times this week. “Any spare time we have, we’re getting all our stuff ready because at the drop of a hat you can go from fishing in 500 feet of Lake Ontario water, to moving up the river and taking a chance there.”

Mayor Billy Barlow said the salmon run is one of the most important pieces to Oswego’s tourism calendar, and it’s a “great sight” when anglers start streaming into town.

“While this year might be different because of the pandemic, we still expect an excellent run,” Barlow said. “Fishing was strong throughout the summer in Lake Ontario, and it’s a nice boost for the city while other activities tend to begin quieting down.”

Lake Ontario contains two species of salmon not native to this side of the Mississippi: the Chinook, or King salmon and the smaller Coho. Both are endemic to the Pacific Northwest but have been introduced to Lake Ontario and its tributaries through a long-term stocking project. More than 1.5 million Chinook and 250,000 Coho are stocked per year by the New York State Department of Environmental Conservation (DEC), beginning at 3-inch “fingerlings” and maturing to up to 30 pounds in several years. After a lifetime enjoying the bounty of Lake Ontario and gobbling up all the alewives and round goby they can handle, the fat, old salmon are driven by instinct to travel back to their birthplace for laying and fertilizing the next generation of salmon eggs.

DEC Fisheries Bureau Chief Steve Hurst told the Pall-Times according to most recent numbers, Pulaski’s Salmon River alone accounts for more than 285,000 “angler days” — over 100k of which were from non-resident anglers.

“There are very few places in the lower 48 states that offer similar fishing opportunities than can be found in Oswego County,” Hurst said.

This migration usually begins in mid-to-late August, when salmon begin to stage near the mouths of the tributaries that feed into Lake Ontario. Mid-September to mid-October is typically the four-week “peak period” when chances of landing a monster salmon are highest. In an odd reversal of normal fishing, the salmon are not hungry — in fact, they’re not even eating. By this point in a salmon’s life, its body is undergoing a series of rapid physiological changes (fin and scale deterioration is the most visible sign). Luckily, the salmon have traded their appetite for aggression — they get fiercely territorial and are attracted to fish eggs (or egg-shaped lures.)

Now we know the where and the why: the how is where we find our excitement. You’ll want a fly rod of 9 or 10 feet, or a spinning reel with an 8 or 9-foot graphite rod. Fly reels should hold at least 150 yards of 20-pound test line; spinners about 200 yards of 12-15 pound test. For bait, the choice is between flies and eggs. The three types of flies most effective for running pacific salmon in rivers are egg imitations, wet flies or streamers, and stoneflies or nymphs. You want to attract the salmon’s attention: use a fly material with flash, color and action to entice a strike. Preserved skein eggs or loose eggs in dime-sized nylon mesh sacks are also a “top producer,” the DEC says. Additional effective egg imitations are 1 or 2-inch twister tails or tube jibs, small pieces of sponge and plastic beads.

Once you’ve got a fish on, be careful: 25 pounds of angry salmon that does not want to leave the water can be a test of strength and endurance.

“If the salmon makes a long run downstream, you usually have to follow it and try to get below it,” DEC guidance states. “You cannot drag a large fish back up river.”

Oswego County and city retailers include Fat Nancy’s Tackle Shop and All Seasons Sports in Pulaski, and the Oz Bait and Tackle Shop and Larry’s Salmon Tackle on West First Street near the hydroelectric station. For newcomers to the sport, Bliss said with a pair of waders and a rod, $20 can get you into action.

An ideal landing situation involves a partner holding a net while the other holds the rod. It’s difficult to grasp a fish in the best circumstances, but salmon at this age are quickly shedding scales and can be markedly slimy. Use gloves. Be aware of your surroundings, especially and including the lines and position of other anglers. Remember: according to the DEC guidelines, you can only harvest a fish that has been hooked in the mouth. Any foul hooking of gills, fins or scales must be aborted and the fish released.

Entering a running stream can be dangerous as rapidly rising water levels, slippery rocks, deep drop-offs and strong currents can often be overlooked in the excitement of the monster catch moment.

“The sight of a school of huge salmon moving past has been known to cause some fishermen to lose all caution and get themselves in trouble,” Hurst said. To make your trip safer and more enjoyable, follow these precautions:

Another challenge for anglers and officials this year is the low water flow in the Salmon River. The region received below-average precipitation this summer, resulting in low and declining water levels in the Salmon River Reservoir. Officials said the Salmon River Flow Management Team, which includes natural resource agencies and Brookfield Renewable, has taken several steps so far to try and avert any significant harm. Brookfield operates the hydroelectric dam that regulates the Salmon River Reservoir levels. Among the measures taken, DEC officials said, were cancelling the scheduled whitewater releases over the Labor Day weekend and delaying the annual Sept. 1 increase in baseflow.

“These actions with conserve reservoir water to maintain suitable flows throughout the salmon spawning run,” conservation officials said in a Sept. 14 announcement. At the same time, officials announced the popular lower fly fishing section of the Salmon River (near the Salmon River Hatchery) will remain closed until further notice. Salmon River seasonal baseflows are typically increased from 185 cubic feet per second (cfs) to 335 cfs on Sept. 1, officials said, providing that water levels in the reservoir are above a critical threshold — which they are currently not.

“In addition, significant rainfall is not forecasted for the near term, prompting DEC to recommend a delay in the scheduled baseflow increase,” the DEC said. “This recommendation is based on abnormally high water temperatures coupled with low water flow in Salmon River tributaries, including Beaverdam Brook where migrating Chinook salmon access the Salmon River Hatchery for egg collections that support the state's successful stocking program.”

At popular destinations, population density can become high enough to make social distancing difficult. Officials said the DEC is placing signage at popular locations reminding anglers to be SMART when fishing this year:

What’s the future for Oswego County salmon fishing? Officials say they’re working hard to ensure the next generation gets to take part.

“The Lake Ontario fisheries resource is one of the most intensely managed freshwater resources in the nation,” Hurst said. “DEC uses the best science available and frequent public interaction to make management decisions that will sustain these magnificent fisher​ies ​and their economic benefits into the future for the ​enjoyment of ​open lake and tributary anglers.”