The Oswego County Pioneer Search and Rescue Team, seen above at left in 1971 and at right on Jan. 18, 2021, is commemorating 50 years of service to local and statewide rescue efforts. 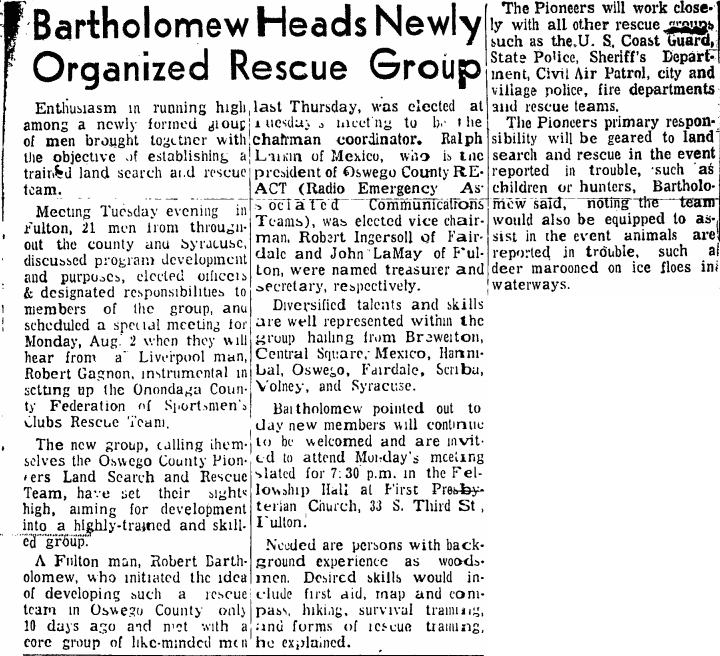 This July 29, 1971 article from The Oswego Palladium marks the beginning of the Oswego County Pioneer Search and Rescue's five-decade contribution to local and statewide missing persons efforts.

The Oswego County Pioneer Search and Rescue Team, seen above at left in 1971 and at right on Jan. 18, 2021, is commemorating 50 years of service to local and statewide rescue efforts.

This July 29, 1971 article from The Oswego Palladium marks the beginning of the Oswego County Pioneer Search and Rescue's five-decade contribution to local and statewide missing persons efforts.

The all-volunteer Oswego County Pioneer Search and Rescue Team (PSAR) was founded in 1971 and was instrumental in forming the foundation of search and rescue throughout the state.

“So many things just happen in our lives, and I am so glad this happened,” said Steve Ives, PSAR founding member. “We want to help you at your worst moment.”

Witnessing the search efforts caused Bartholomew to question why no organized SAR team existed, and he wanted to change that. According to Ives, Bartholomew ran an advertisement in the Fulton Valley News calling for interested people to go to his backyard and initially meet about a team. The 22-year-old Ives saw this and was quick to join that call, and soon after, the PSAR started.

Following the meeting, Ives said the all-volunteer team was quick to start practicing and working closely with emergency services to help locate missing people around the state.

During their early years, Ives said the PSAR found it hard to find a team to reference from because there was no other search and rescue team. In order to practice and learn, they relied on one another to teach survival skills, navigational skills and much more. During those first years, Ives was instrumental in equipment and resource management.

A few years following their start, PSAR was working with the Fulton-based state police and the state’s Department of Environmental Conservation (DEC). Through their efforts, the PSAR was recognized as the official county search and rescue team by the Oswego County Legislature in 1973.

However, working closely with these teams left the Pioneers stretched thin as they aided in searches all around the state. The need for more search and rescue teams around the state became apparent.

“We thought, ‘There has to be more people in the state who want to do this,’” Ives said.

Taking from a page in their manual, they advertised in large newspapers throughout the state calling interested members to meet in the same backyard they started in.

In 1974, the PSAR paved the way to founding the New York State Federation of Search and Rescue Teams. The federation is a volunteer coalition of independent rescue teams throughout the state. Ives said the PSAR trained these interested members on their search and rescue methods and led them to form similar groups around the state.

“Search and rescue (in the state) started in Fulton,” Ives said.

Ives said that the time on the team was both rewarding and nerve-racking at times. He said one of his most memorable experiences was leading the PSAR rope and rappelling exercises in the Salmon River Falls area and with the Syracuse Fire Department.

“I’d go over the edge of something, my knees were rocking, scared to death and to someone who was training people, that was quite a thing for me,” Ives said.

He added that searches don’t always end in a conclusion, however. Two specific searches he assisted on while working with PSAR that were notable to Ives were the 1993 Sara Ann Wood and the 1994 Heidi Marie Allen searches.

“It really hit me, those types of searches that have no real end to it,” Ives said.

Today, half a century later, the local team still holds on to the same core beliefs of locating residents and helping the community. According to PSAR President Aaron Albrecht, the PSAR currently has a diverse, active 28-member roster, newer equipment, vehicles, tactics and new training regimens.

“The team is almost half-and-half male and female. We have a mix of both that serve on the team,” Albrecht said. He added that during the initial years, women were not often involved in the searching around the wild, but were instead focused behind the scenes.

“They get the full experience,” Albrecht said. “Whatever we run into, they are trained for.”

The school offers classes every two years, and classes won't be available again until 2022.

Last year, Albrecht said PSAR was “activated” — responding to the scene — by the Oswego County E-911 dispatcher for 26 calls to locate missing community members. Of those 26, they conducted full scale searches for about a dozen people. Since joining in 2010, Albrecht noted that there have been no unresolved searches.

In the future, the PSAR plans to continue its commitment to the public’s safety through the recent acquisition of a new command center. The repurposed ambulance was acquired late last year to provide faster and better service to the community.

For more information or to get involved, visit oswegocountysar.com or their Facebook page.