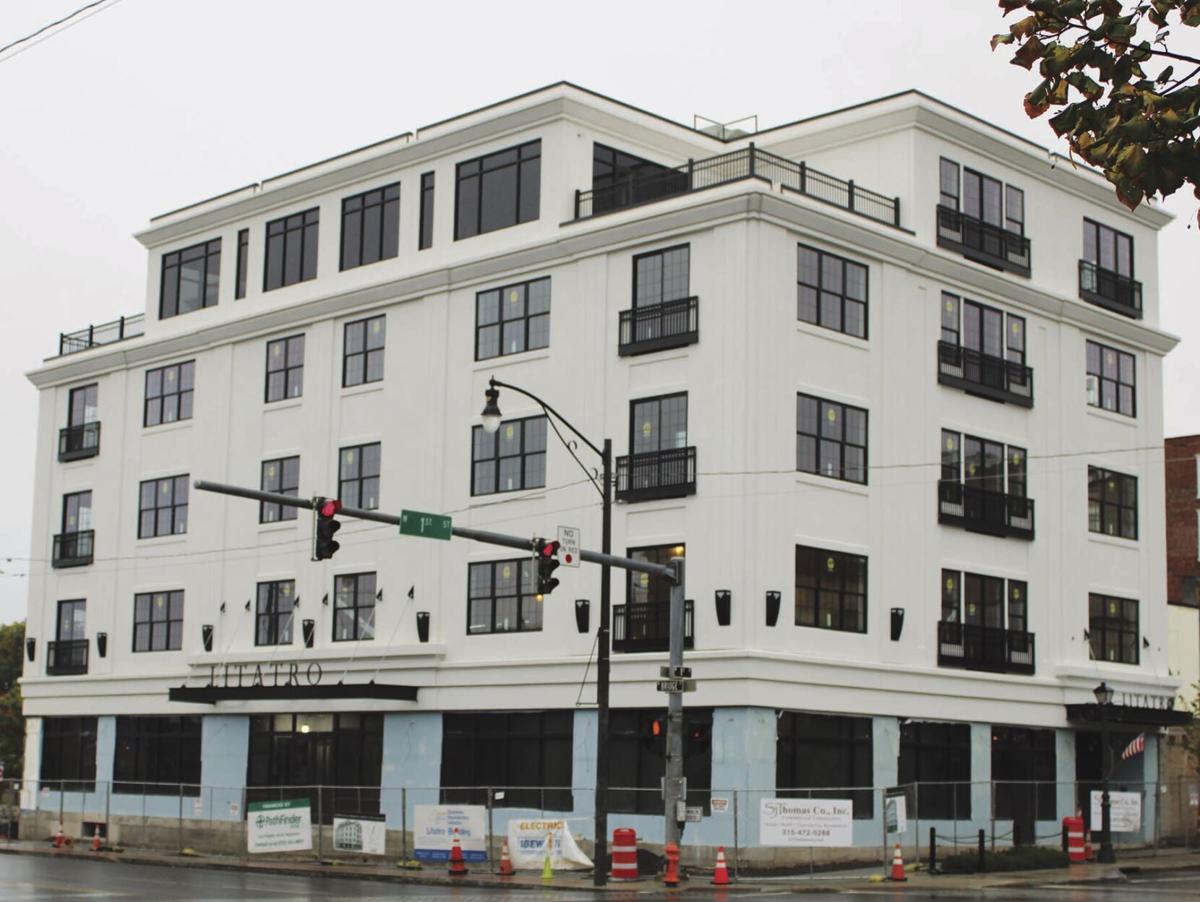 The towering LITATRO Building, pictured above on Sept. 29, was one of the dozen Downtown Revitalization Initiative projects started in the city since the $10 millions state grant was awarded in 2016. Construction is largely completed after a busy summer, and officials expect the building to open to the public as earlier as this year. 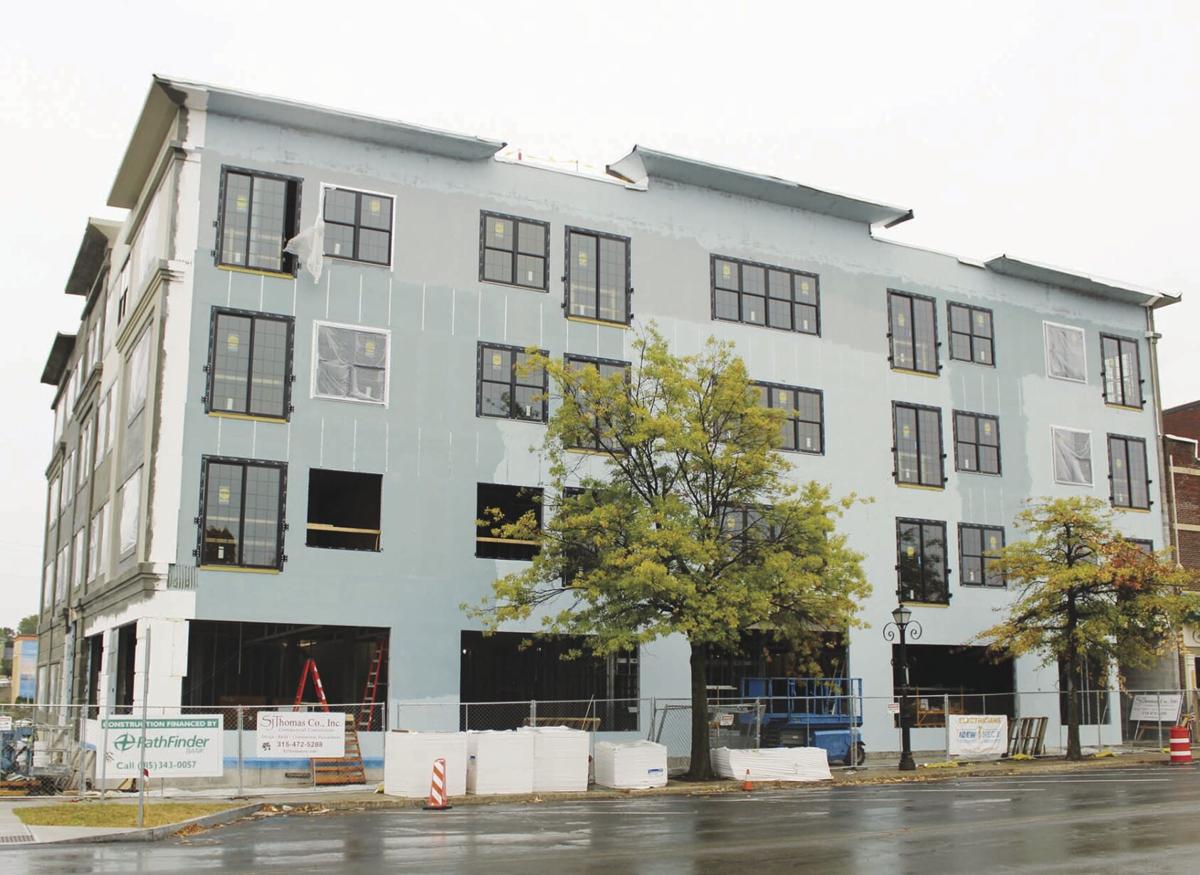 The Riverwalk complex on West First Street is another Downtown Revitalization Initiative projects under construction this summer in the Port City. 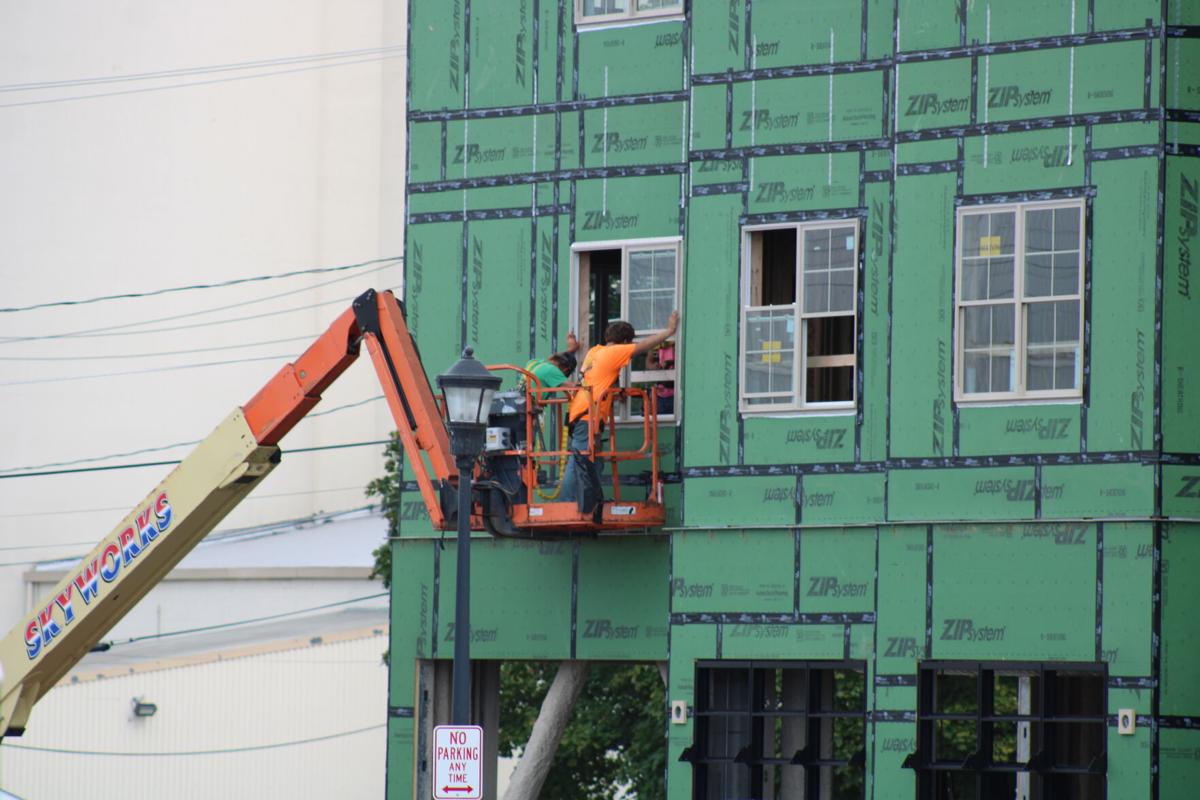 Contractors install windows in the Harbor View Square development on West First and Lake streets earlier this summer. The mixed-use development is one of many projects under construction this past summer in the Port City. 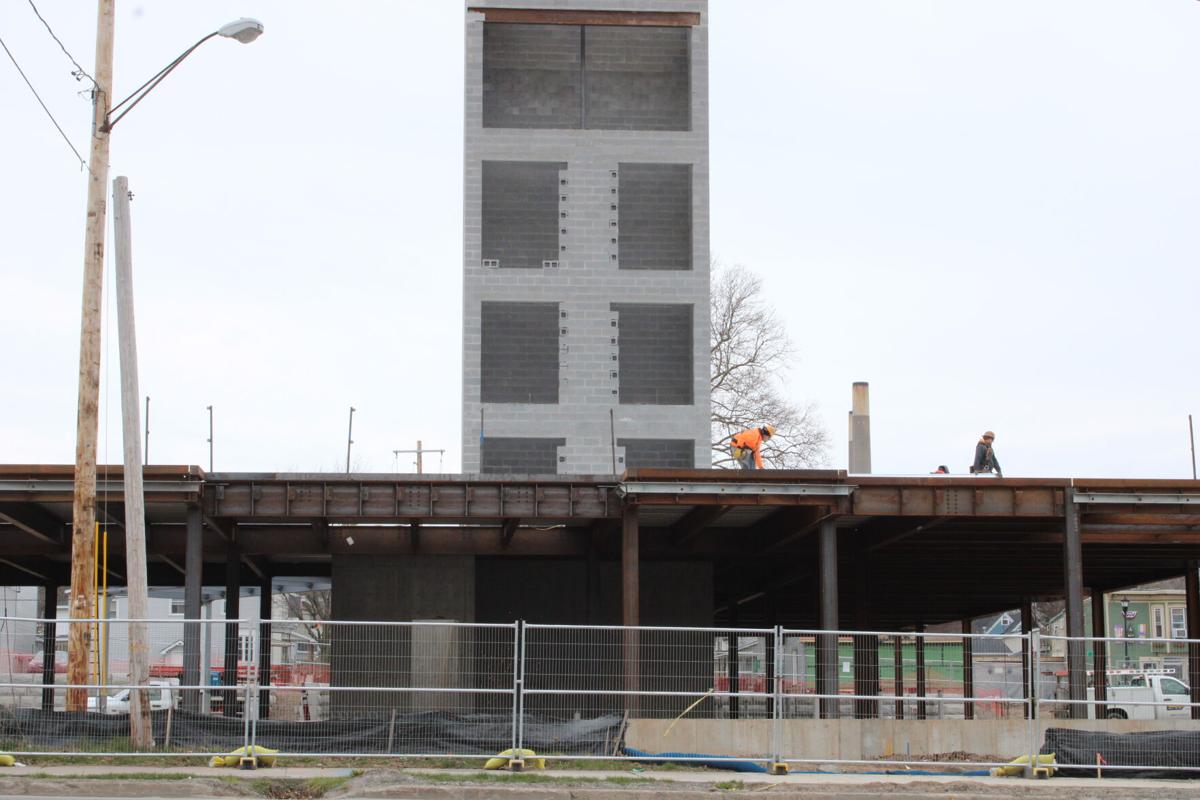 The Harbor View Square complex, pictured above in April, is now nearing completion after a busy summer of construction. 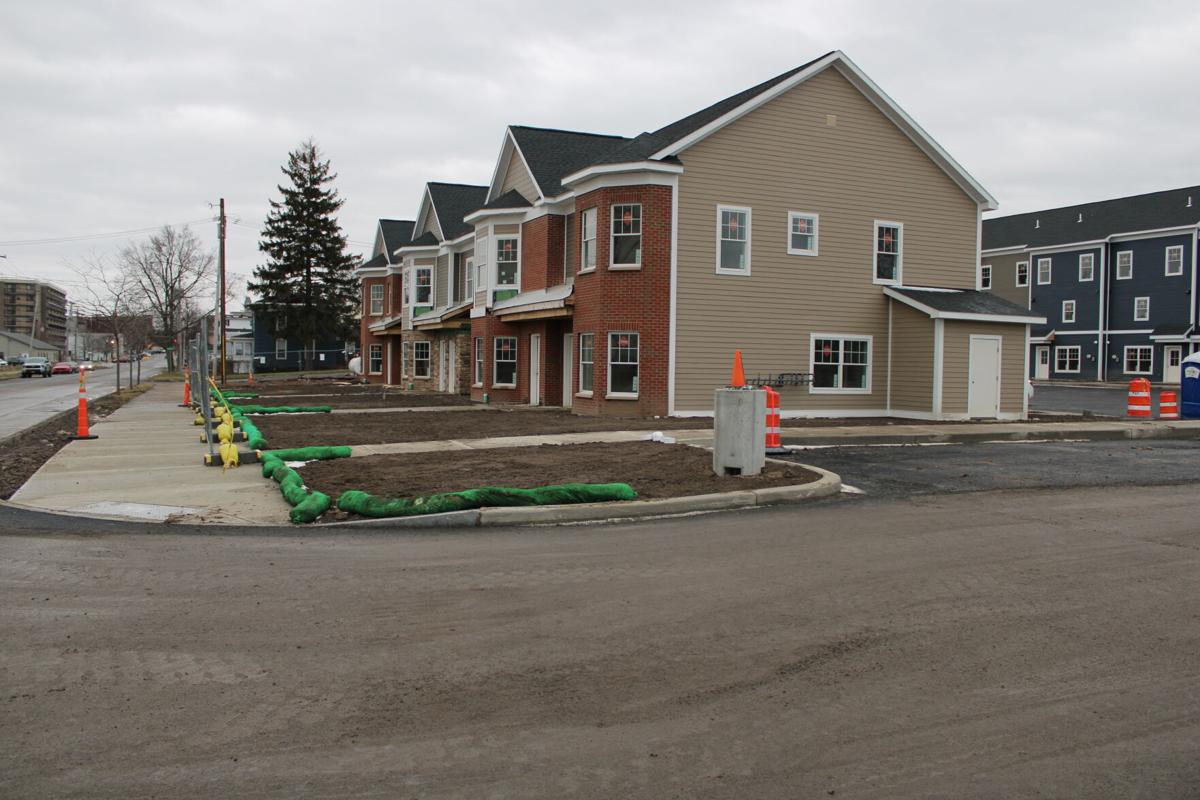 The Harbor View Square townhouses, pictured above earlier this year, are largely complete as work continues on the largest building of the complex that overlooks Lake Ontario. 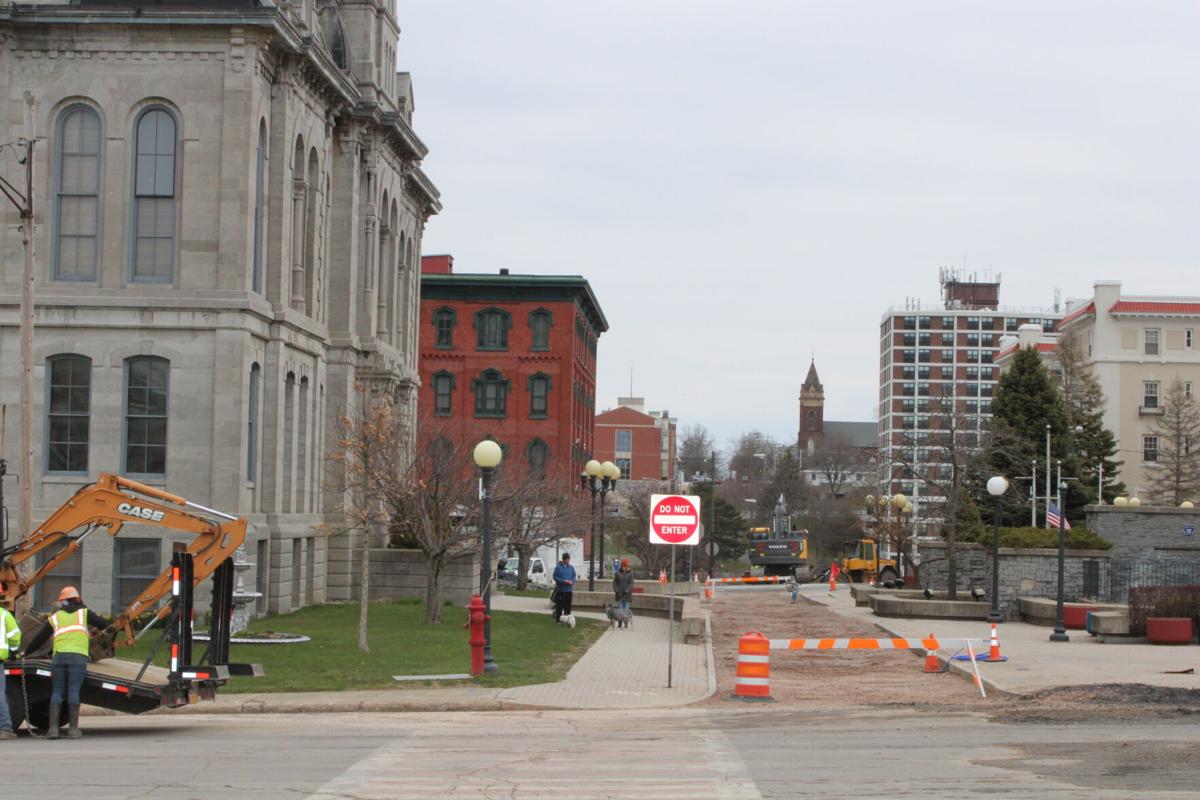 Sewer separation, or consent decree, work was a staple throughout the Port City's west side in the summer of 2020. Pictured above, contractors work on the sewer project outside City Hall, which is also undergoing renovations. 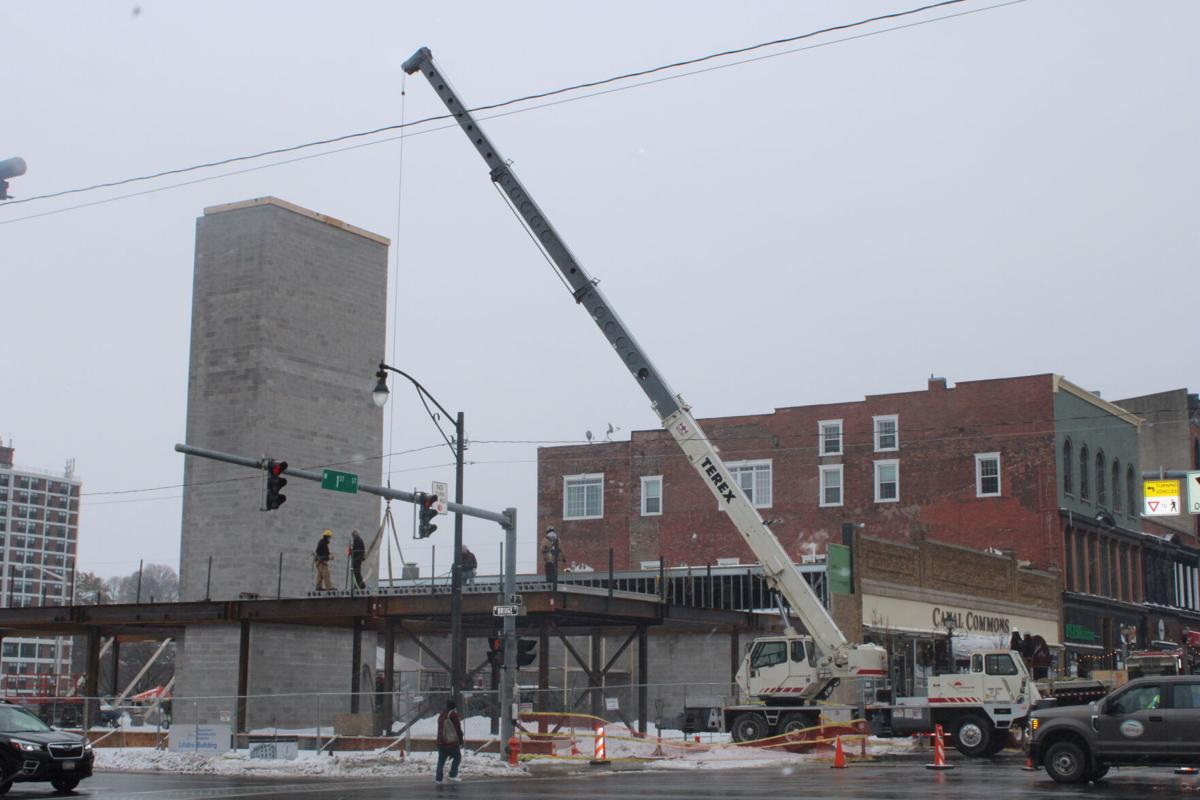 The LITATRO Building, pictured above in early 2020, is now nearing completion after a busy summer of construction. 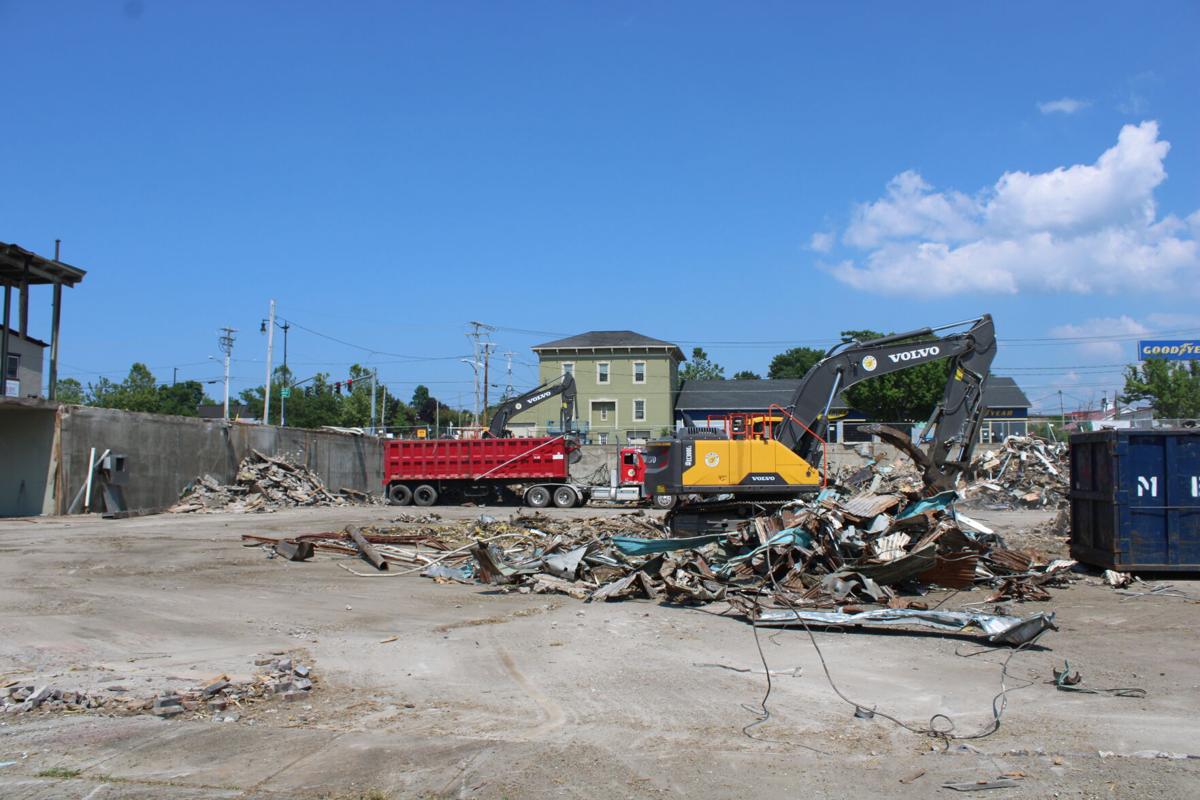 The former Midtown Plaza site was razed earlier this year and contractors are constructing a large, mixed-use complex that officials say could anchor the city's east side for years to come and spur further development in the area.

The towering LITATRO Building, pictured above on Sept. 29, was one of the dozen Downtown Revitalization Initiative projects started in the city since the $10 millions state grant was awarded in 2016. Construction is largely completed after a busy summer, and officials expect the building to open to the public as earlier as this year.

The Riverwalk complex on West First Street is another Downtown Revitalization Initiative projects under construction this summer in the Port City.

Contractors install windows in the Harbor View Square development on West First and Lake streets earlier this summer. The mixed-use development is one of many projects under construction this past summer in the Port City.

The Harbor View Square complex, pictured above in April, is now nearing completion after a busy summer of construction.

The Harbor View Square townhouses, pictured above earlier this year, are largely complete as work continues on the largest building of the complex that overlooks Lake Ontario.

The former Midtown Plaza site was razed earlier this year and contractors are constructing a large, mixed-use complex that officials say could anchor the city's east side for years to come and spur further development in the area.

Barlow: Years from now could be viewed as transformative, positive era'

OSWEGO — Cranes, concrete mixers, flat beds and work crews have become a frequent sight in the Port City over the past year — something officials warned about earlier this year — and local officials say the short-term pains felt this summer could result in long-term gains that ultimately transform the city for the better.

Much of the construction — the LITATRO Building at Bridge and West First streets, the Riverwalk and Harbor View Square on West First Street and East Lake Commons at East First and Bridge — is connected to the $10 million state Downtown Revitalization Initiative (DRI) award from 2016. Waterfront improvements, roadwork and the years long sewer separation work also occurred throughout the summer as construction was a constant, and officials say despite the heaviest work being behind the city, there is more to come as the DRI funds spur further investment.

“We’ll continue to see work on the DRI projects and waterfront into next summer, but we’re through the thickest point,” said Oswego Mayor Billy Barlow, who earlier this year repeatedly called the short-term inconvenience a small sacrifice for the long-term benefit of the city.

City and state officials in recent years promised the DRI funding would spur development, even as little visible construction occurred in 2017 and 2018, and those promises came to fruition over the past two years. Construction peaked this summer even as the COVID-19 pandemic brought much of the country to a standstill.

Lt. Kathy Hochul in July 2017 announced a dozen projects awarded funding through the city’s DRI award, noting of upstate New York “the talk and the conversation has been about our great days in the past,” but moving forward the talk would be “about what lies ahead.” Hochul said in addition to altered streetscapes and downtown improvements, the DRI would bring “a significant psychological shift in the people who call (Oswego) their home.”

“And that is absolutely contagious and that will spread,” Hochul said at the time.

A little more than three years out, the Port City’s streetscapes and downtown have certainly been altered, and Barlow says the psychological shift is also coming true.

“Prior to 2016, there wasn’t much to be excited about. That’s just a fact,” Barlow said. “There was no construction, no development, no forward progress. Now, we’re seeing more development and more investment than we’ve seen in decades. Our downtown is being developed, our waterfront is being totally transformed, our neighborhoods are improving, we’re improving our parks, adding more amenities and creating more things to do. So a lot has changed and is changing.”

Barlow said the city, in his mind, went from “near free fall to being on the rise.” He said there’s a confidence within the community, and the biggest difference between 2020 and 2015 is the way Oswego residents speak favorably about their own community.

“They see the progress and feel the momentum, and you’re seeing some excitement come back into Oswego,” Barlow said. “We’re changing the way we think about ourselves. That is a game changer for this community, and if we keep making progress, stay optimistic and remain confident, there’s no reason for the progress to stop anytime soon.”

Over the past four years, the city has seen the restoration of the Cahill Building, the start of construction (and near completion) of several mixed-use developments downtown, the installation of the Water Street Square pocket park, aesthetic improvements to the downtown corridor and a number of other projects. The East Lake Commons development, which broke ground earlier this year, was the final DRI project in the city to get off the ground.

“I’m extremely proud of the fact that in four years we made all our projects a reality,” Barlow said, noting it has been closer to three years since the final selection of DRI projects came in the summer of 2017. “When I left the Children’s Museum after the announcement awarding each project, people told me the projects wouldn’t happen, weren’t viable, physically impossible and the list goes on… through all the doubt, we made it happen and happen fast by government standards.”

Common Council Vice President Kevin Hill, R-3rd Ward, who represents much of the city’s downtown area, called the significant construction downtown “the physical representation of a tremendous amount of investment” in the city’s center.

“It is a tangible sign of progress and much of the activity is related to Downtown Revitalization Initiative projects finally coming to fruition,” Hill said. “Investment in our downtown has changed the trajectory of our community, breathing new life into our core city center, bringing more retail and residential opportunities to attract residents and visitors alike.”

Barlow said when all is said and done, the city’s downtown will be more developed and include more activities, in addition to a more diverse selection of restaurants and events.

“It’ll without question be a more viable downtown and hopefully destination worthy for folks outside city limits,” the mayor said.

LITATRO and the Riverwalk will “breathe new life into downtown immediately,” Barlow said, and introduce quality residential units into downtown, helping attract employees of Oswego Health, Exelon, SUNY Oswego and other major employers who in the past too often chose to live outside the city.

Perhaps the most impactful feature of the DRI projects, Barlow said, is the introduction of residents to the city’s downtown. Five different projects, once complete, will introduce more than 100 apartment units downtown, which Barlow said would translate to economic activity in the city’s core and more opportunities for local businesses.

“The infusion of residents will make the small business community stronger and position our core downtown area for more private sector investment as time goes on,” the mayor said.

Hill said in the short term, the projects would “immediately ease the overwhelming demand for higher-end downtown residential options,” increasing the vitality of downtown businesses, as well as drawing residents and visitors to downtown.

“Long term, the structural changes in downtown infrastructure and amenities will provide our community with a sustainable city core that will contribute to our unique identity, and provide the backbone for ongoing economic opportunity,” Hill said.

The consent decree work, which perhaps caused the most disruption to motorists this summer, was the culmination of a multi-year, nearly $90 million order to separate the city’s wastewater and storm water sewer systems. Hill said the work was symbolic of the city’s change in philosophy to no longer neglect, and instead upgrade, vital infrastructure.

“Although inconvenient and widespread, the sewer separation work — some of which still continues — is an investment in the long-term safety and efficacy of these important systems, which will provide benefits for decades and prevent a future ‘consent decree’ from saddling our city’s residents with unbearable sewer and water rates,” Hill said.

In addition to the DRI projects and sewer separation, the city was awarded more than $12 million for waterfront improvements through the state’s Lake Ontario Resiliency and Economic Development Initiative (REDI) to revamp Wright’s Landing Marina and the International Pier. Some of that work is also underway, and city officials expect the DRI and REDI funding to connect the gap that has long existed between the city’s downtown and waterfront.

Together, the state and city funding, along with private investment, could transform the city for decades to come.

“I’d like to think the public will view the last few years as Oswego’s resurgence,” Barlow said, adding it’s not easy for upstate New York communities that face thin budgets, an exodus of residents from the region and a less than ideal tax and business climate. “Through all the challenges we’ve managed to turn things around. We reclaimed our neighborhoods from landlords, re-built our downtown, worked on our waterfront, improved our parks and we’re still moving ahead. I’d like to think years from now it’ll be viewed as a transformative, positive era and a time when we, as a community, re-identified ourselves.”

Barlow noted in addition to the DRI and REDI projects, the funding has spurred additional investment in surrounding areas as developers gravitate toward the forward momentum.

“People notice positive change, they notice improvement and then they want to be a part of it,” Barlow said, pointing out a number of related improvements downtown and along the waterfront such as Stone’s Candy, Man in the Moon Candies, Gibby O’Connor’s Irish Pub and others.