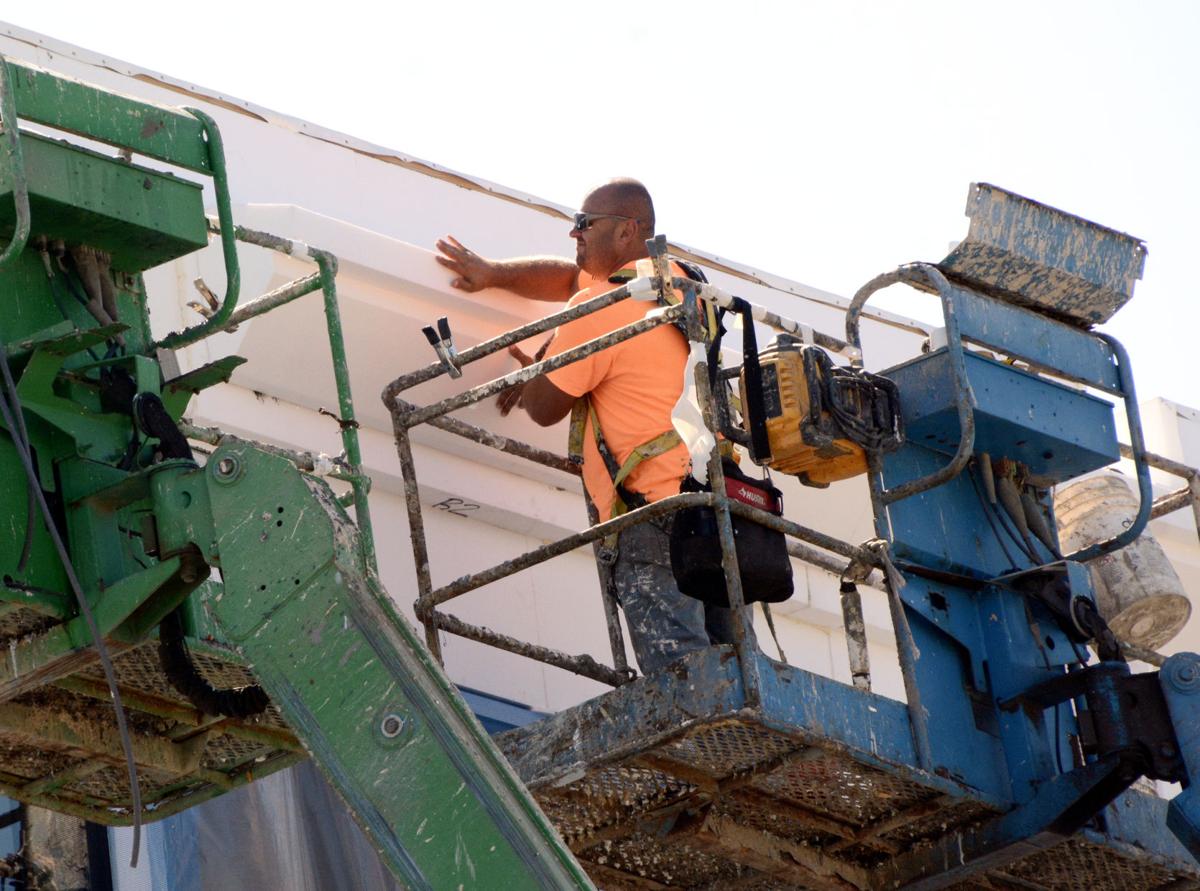 Crews work on the top exterior of the LITATRO Building at the corner of West First and West Bridge streets. 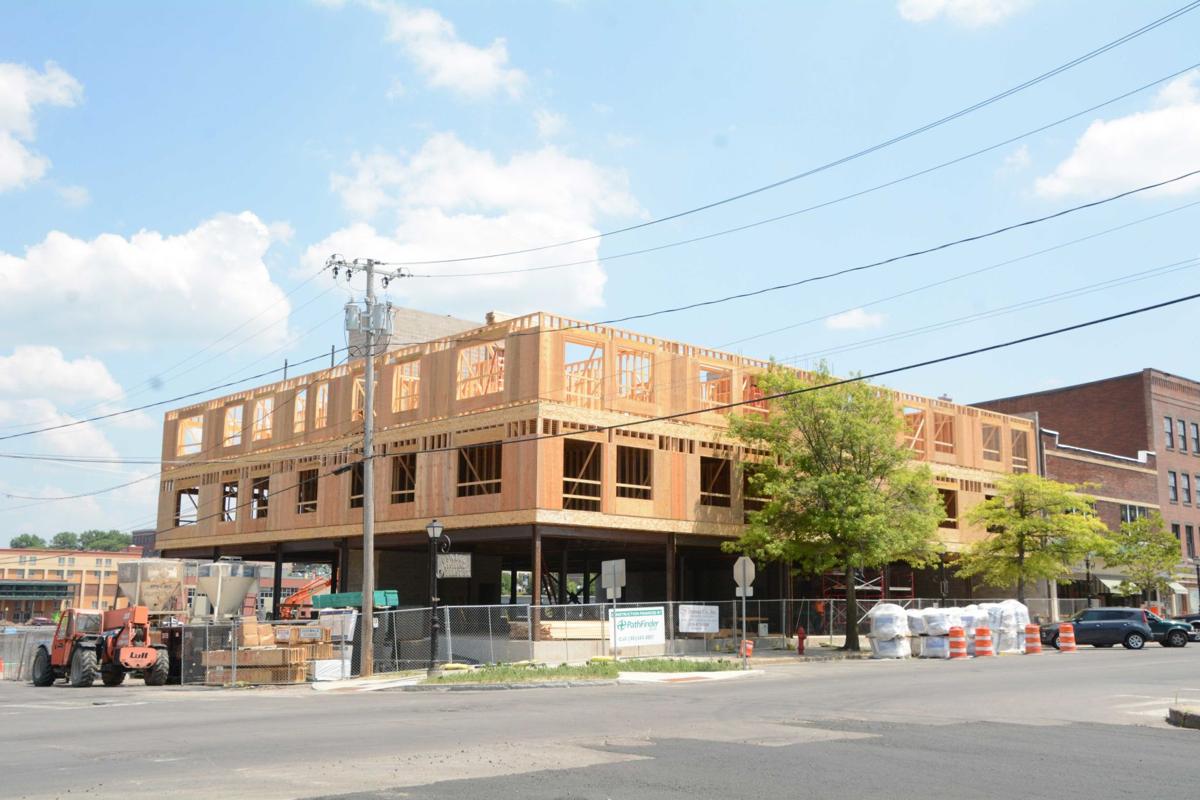 The wooden frame of the Riverwalk/22 Crossroads at the corner of West Seneca and West First streets.

Crews work on the top exterior of the LITATRO Building at the corner of West First and West Bridge streets.

The wooden frame of the Riverwalk/22 Crossroads at the corner of West Seneca and West First streets.

OSWEGO — Oswego Mayor Billy Barlow says he has a vision for downtown Oswego, and much of it is coming to fruition this summer on a 1.5-mile stretch of West First Street.

The Route 48 Green Gateway first welcomes traffic entering from the south. After crossing West Utica Street, where sewer separation work is nearly complete, visitors will see a crane peforming roof work on city hall, exterior touches being made on the new, five-story LITATRO Building at the corner of West Bridge Street. Just a few blocks down, the 22 Crossroads building is going up.

For Barlow, the projects coming together is the result of a constant effort since taking office in 2016. The goal is to attract more people, he said, including residents, visitors and boaters to the Port City’s downtown area.

“The construction and development, not just on West First Street, but of the entire waterfront and downtown area, is a vision I’ve had since taking office. It’s a vision and work the city government has been discussing and living for four years,” Barlow said. “Now that construction and development is actually happening, residents are noticing all the different projects, all the work and all the benefits the investment and projects will bring to the community.”

Nathan Emmons, director of economic development for the city and an Oswego County Legislator, believes this is one of the biggest summers in the city’s history.

“The developments we are seeing happen right now are once in a lifetime opportunities, the likes we as a city have not seen in decades,” Emmons said. “When Mayor Barlow took office, I was on city council at the time. I knew from day one he had a vision for the transformation of the city and a deep desire to advance our city into the 21st century, taking full advantage of our waterfront, our downtown and our history. This has led us to today, the work we are seeing and the tremendous energy that we are now feeling.”

Local developer Anthony Pauldine worked on Canal Commons, the historic Cahill Building and other projects throughout the city as one of the most prolific developers in the region. He’s now tackling the Oswego YMCA.

“We’ve been developing on West First Street and in the heart of downtown for the last 20 years, and we feel like we were beginning to pave the way,” Pauldine said. “I remember 20 years ago saying that if we did what we were doing, other developers would come and they have been. Now it seems to be a crescendo of just a huge amount of buildings, the likes of which I don’t think we’ve see since the 1800s. It’s dramatic, it’s exciting and it adds a lot.”

Here are some of the highlights from recent developments on the corridor:

The exterior work of the LITATRO Building (an acronym for “Luck Is The Ability To Recognize Opportunity”) should be complete by the end of the month, according to developer Atom Avery.

The building is using $700,000 of the city’s $10 million in Downtown Revitalization Initiative (DRI) funds and is replacing the demolished Global Buffet, which city officials called an eyesore and cheered when the wrecking ball landed last year.

Southern Fare, the modern fusion restaurant at the base of the five-story building, could open its doors by mid-to-late August, and has already received city council approval for outdoor dining on the sidewalk.

Work will continue on the rest of the building’s 20 housing units, basement parking and rooftop bar area. Those are on track to be completed by late 2020 or early 2021, Barlow said.

“People will be happy with the final product, and the building will have no problem filling with residents,” Barlow said.

Avery told The Palladium-Times he wanted to thank the surrounding businesses for dealing with construction in the busy downtown area.

“Things are finally shaping up at the building,” Avery said. “The community and downtown businesses have been amazing with the inconvenience of a new structure. I really want to thank them for their understanding.”

SJ Thomas Construction of Syracuse, who is also doing work on the LITATRO Building, is making good time on the project at the corner of West First and West Cayuga streets, according to officials.

“You’ll start to see additional floors constructed quickly, similar to the rate we saw at LITATRO,” Barlow said of the four-story complex. “A similar concept (to LITATRO) will have a commercial space in the bottom of the new building with beautiful residential units above, and will complement our improvements to Water Street and the Water Street Square Pocket Park nicely.”

22 Crossroads entrepreneur Ed Alberts told the Pall-Times he is hoping for a fall completion for the 32 apartments with underground parking and river views.

“We are appreciative of the partnership for the DRI funding,” Alberts said. “We’re looking forward to bringing luxury Riverwalk apartments and new restaurant concepts to the Oswego riverfront.”

The West Seneca Street Bikeway, a $725,000 project aimed at creating a more pedestrian and bike friendly corridor through the northwest sector of the city, is complete and an “absolute success,” Barlow said.

“A major goal of the project was to limit the amount of vehicles using West Seneca Street and to reduce speed, and the project has clearly done both,” Barlow said.

The city is working with Paul Stewart and members of the Oswego Renaissance Association to fill the new bump-outs with green space and to create curb and flower gardens.

“We’d like residents and motorists to use caution and adjust to the reduced width of the road,” Barlow said. “Once people get used to it, I think they’ll start to see the value of the bump-outs and we can perhaps begin introducing them to other areas of the city.”

Contractors and subcontractors at City Hall have begun preliminary masonry work on the building with a crane brought in to begin replacing the roof, Barlow said.

The Oswego Common Council approved a $2.6 million construction contract with Oswego-based PAC Associates for the renovations in April.

Oswego City Hall was built in 1870 and added to the National Register of Historic Places in 1973. Renovations include replacing the roof, gutters and some of the windows, and masonry to stabilize portions of the building.

“The weather has the project running on schedule with no major issues so far, but it is still early on,” Barlow said. “Construction is set to run through the summer with an estimated completion date of mid-November.”

The work on the Route 48 Green Gateway, a beautification project on one of the Port City’s busiest thoroughfares, was completed last week, Barlow said.

The mayor added that some rain would help the bio-swale rain garden and grass to come in fully and do its job. Overall, he was pleased with the work by W.D. Malone, which was awarded the $248,000 construction contract in April.

“Overall we are satisfied with the project as it dresses up the Route 48 corridor with more green space and trees, eliminating a lot of concrete and asphalt,” Barlow said.

Oswego is in the third and final phase of consent decree work, the product of a a federally mandated settlement to resolve problems with unpermitted sewer overflows throughout the city.

The sewer separation work between West Utica Street and state Route 104 is nearly completed, and the work is moving on toward West Cayuga Street, Barlow said.

“The project is running well ahead of schedule thanks to good weather and minimal issues along the way, and will easily be completed by the Nov. 1 deadline,” Barlow said.

Much of the heavy construction will lighten up over the next couple weeks, but in August the entire area that was torn up and temporarily repaired with asphalt will be repaved curb to curb.

“For the most part, a bulk of the heavy construction is behind us and the construction will slowly lighten up and become more isolated as we get deeper into summer,” Barlow said.

Barlow remembers all of the complaints and the naysayers when Lieutenant Gov. Kathy Hochul visited in 2017 to announce state funding for the Port City.It’s understandable — residents had been used to plans without action. Barlow intended to remedy that.

“We became so study weary and plan weary in Oswego because we always had studies and plans and nothing ever changed,” Barlow said. “Since that day when Kathy Hochul was here in August 2017 and before I even got back to my office some folks were doubting our plans, we were determined to get them all done, and we did. It took a lot of time, energy and work, but we made it happen thanks to so many people here at City Hall and the private partners we’ve worked with along the way.”

The projects continue on West First Street and beyond. All 12 of the DRI projects are under construction and “will come to fruition,” Barlow said, but noted the $16 million project at Wright’s Landing Marina is needed before his vision is complete.

Still, city officials expect everyone in the city to benefit from the projects on West First Street.

“All of these projects were meant to improve the quality of life for our residents while attracting new residents to our city,” Emmons said. “Over the course of many years, we have witnessed many whom work in and around the city, but decide to reside elsewhere. The transformational nature of all these projects, the investment both publicly and privately, and the collective energy that results from them, sends a clear message that the city of Oswego is a city on the rise.”

Barlow believes the city is making a push — and a big one in the summer of 2020 — in the right direction.

“I think it’s hard to not get excited about the transformation underway and the progress we’re making as a community,” Barlow said. “I’m proud of the progress and certainly acknowledge we still have work to do, but we’re seeing more investment, more action than the community has seen in at least 40 years.

“The real progress will be when the projects are completed and that’s what I’m most looking forward to.”