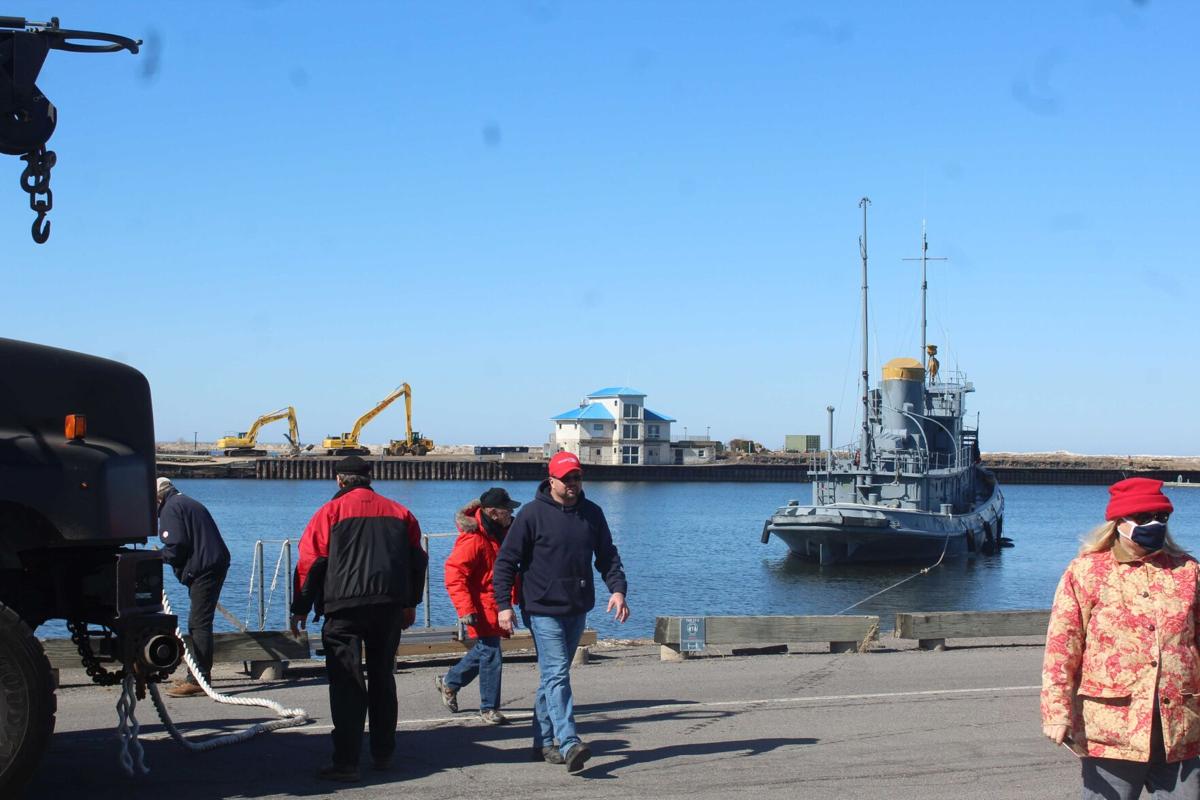 Contractors and first responders work Sunday morning to attach the lines of the LT-5 to a truck winch. 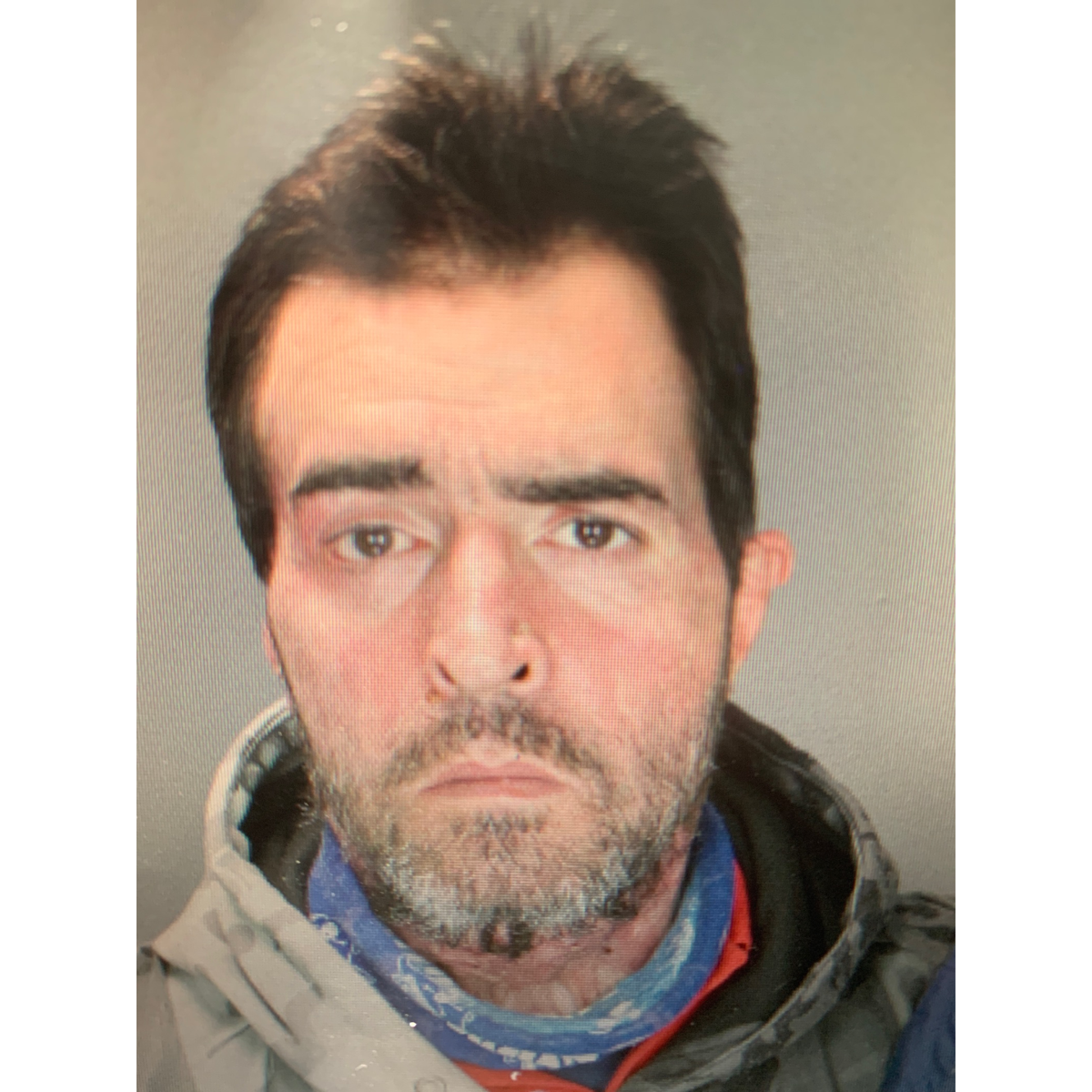 Shawn M. Moore, 43, is pictured in this mugshot provided by the Oswego Police Department. Moore is facing multiple charges in connection to an alleged incident over the weekend where police say the man unmoored the LT-5 tugboat from its dock in Oswego Harbor.

Contractors and first responders work Sunday morning to attach the lines of the LT-5 to a truck winch.

Shawn M. Moore, 43, is pictured in this mugshot provided by the Oswego Police Department. Moore is facing multiple charges in connection to an alleged incident over the weekend where police say the man unmoored the LT-5 tugboat from its dock in Oswego Harbor.

City officials announced the arrest of 43-year-old Shawn M. Moore on Monday. Oswego police said Moore is responsible for untying the historic watercraft from its moorings, an act that ultimately led to the vessel running aground in the harbor Sunday morning before rescue crews returned it to its usual spot along the pier.

Moore is charged with third-degree criminal tampering and second-degree reckless endangerment of property. Both crimes are class B misdemeanors, punishable by up to three months imprisonment or one year probation.

As of Monday afternoon, Moore was being held in custody pending arraignment.

Authorities were alerted Sunday morning of an unsecured vessel off the coast near the H. Lee White Maritime Museum at the northern end of West First Street. Police officers observed the US. Army Transport LT-5, which was previously moored on the pier, had drifted into the harbor unattended.

“It is unfortunate that a person had the urge to take such time and energy trying to destroy a local, unique and iconic landmark like the LT-5 tugboat,” Oswego Mayor Billy Barlow said Monday. “Regardless, we pledged yesterday to do whatever it takes to track down whoever was responsible for this thoughtless act and let’s hope the justice system holds this individual accountable.”

The Oswego Fire Department’s Marine Unit responded and was able to secure the vessel, and with the assistance of private contractors, the LT-5, also known as the Elisha K. Henson, was secured and returned to the pier without incident.

The LT-5 tugboat is a historic vessel that saw action in the English Channel during World War II. The historic vessel left Exmouth, England as part of a fleet of tugs, barges, merchant ships and concrete caissons with orders to create artificial harbors to ensure a steady supply of men and materials needed for the D-Day invasion.

The ship was delayed by heavy winds, but arrived off the coast of Normandy June 7, 1944, and remained in service through the end of the war.

Following the end of the war, the LT-5 returned to the United States and aided in the maintenance of harbors and other construction projects, including the St. Lawrence Seaway.

The 78-year-old tugboat was built in Oyster Bay, New York and is listed as a National Historic Landmark. More than $350,000 was awarded for maintenance of the vessel under the federal "Save America's Treasures" effort.

Now part of the H. Lee White Maritime Museum, the LT-5 serves as a regional attraction, open for tours and display in the Port City throughout the year.

The U.S. Coast Guard first reported the ship was untethered from its seasonal moorings, according to Oswego Fire Department (OFD) Chief Randy Griffin, who noted the tug boat was “pretty steady on the sand” early Sunday.

The portion of the Oswego Harbor adjacent to the West First Street Pier is dredged to allow the Coast Guard and United States Geological Survey to enter and exit, but the LT-5 drifted far enough to become stuck.

OFD personnel secured the ship’s lines, then brought the lines back to shore where they were attached to a waiting tow truck. The truck’s torque, combined with guidance from firefighters and other first responders, was able to guide the ship gently back to its berth. The entire process took roughly 15 minutes.

Officials on Sunday said the LT-5's ropes were recently purchased and installed by the museum, and the lack of damage to the ropes raised immediate questions regarding the circumstances.

“(The LT-5) was here, like she has been all winter, and the lines were intact,” Griffin said. “If the rope was still here and broken in the middle, I’d think maybe it broke free. But it’s pretty clean.”

OPD said anyone with further information about the incident is encouraged to contact the department at 315-342-8120. Authorities said calls would be kept confidential.