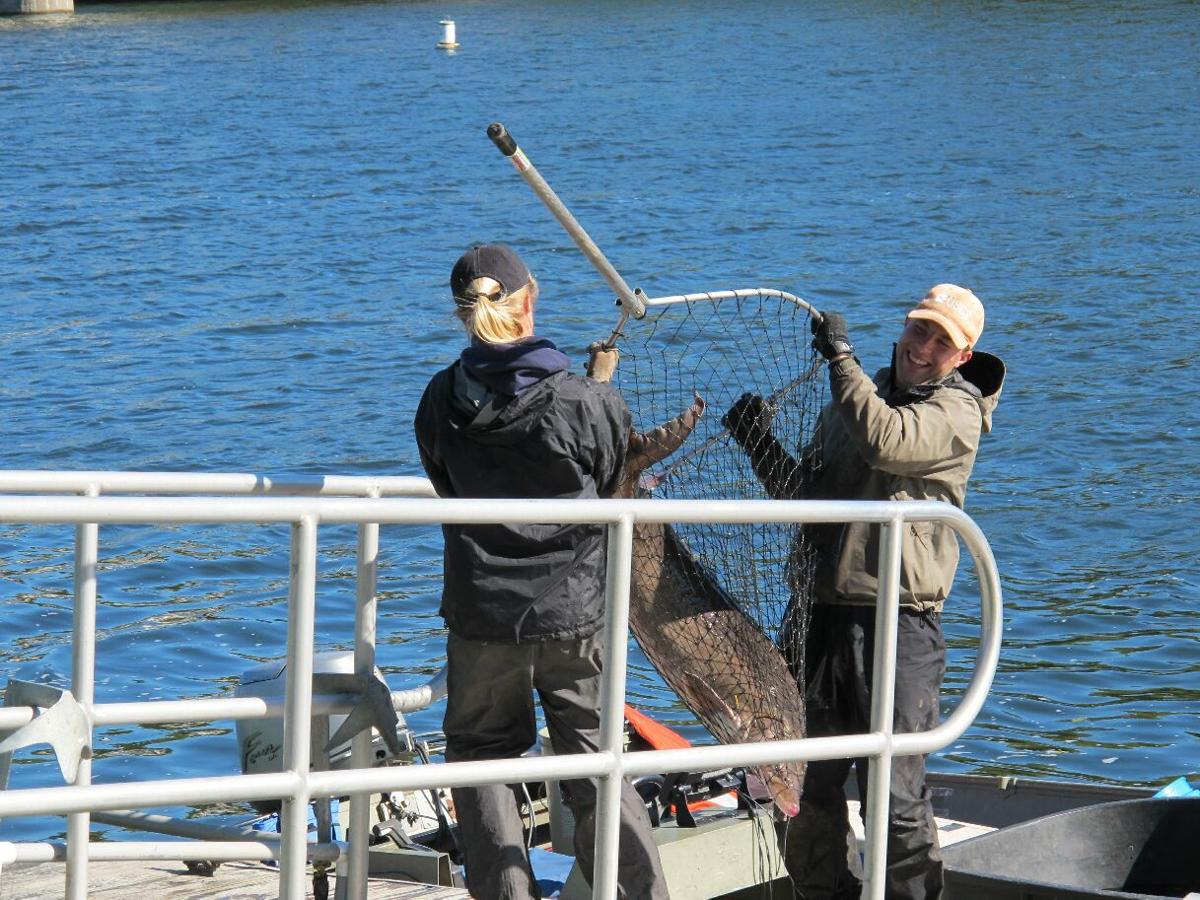 The state Department of Environmental Conservation released a final Lake Sturgeon Recovery Plan this month aimed at restoring self-sustaining populations in New York. Local sturgeon populations are on the rise, according to officials, and the fish — which can grow up to 7 feet and 300 pounds — can be found in Lake Ontario, Oneida Lake and the Oswego River. Pictured above, officials from the U.S. Geological Survey net a Lake Sturgeon in the town of Minetto in 2012. 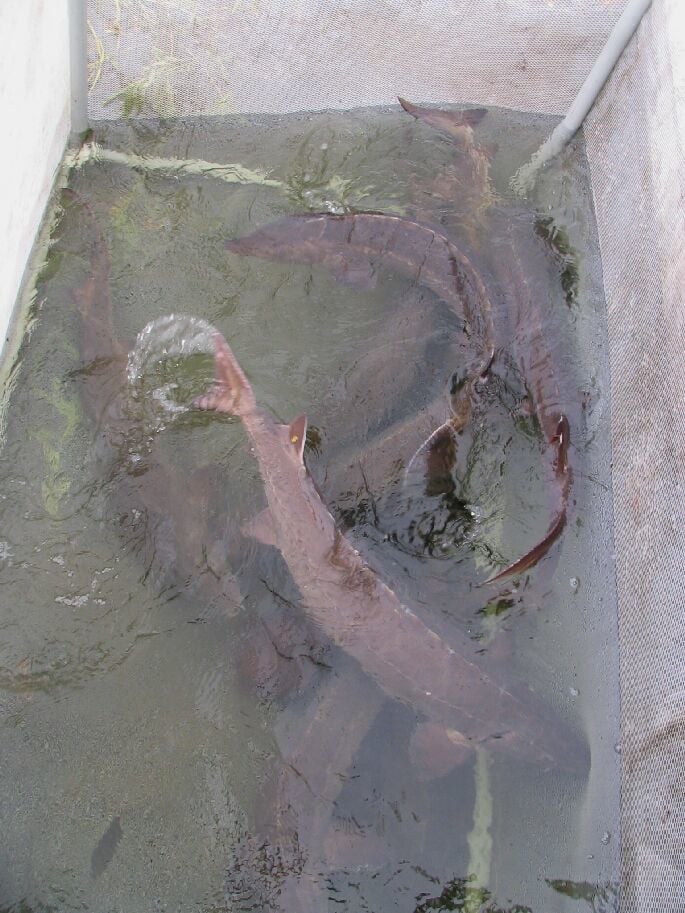 Several Lake Sturgeon captured in Minetto by the U.S. Geological Survey swim in a pen in 2012. 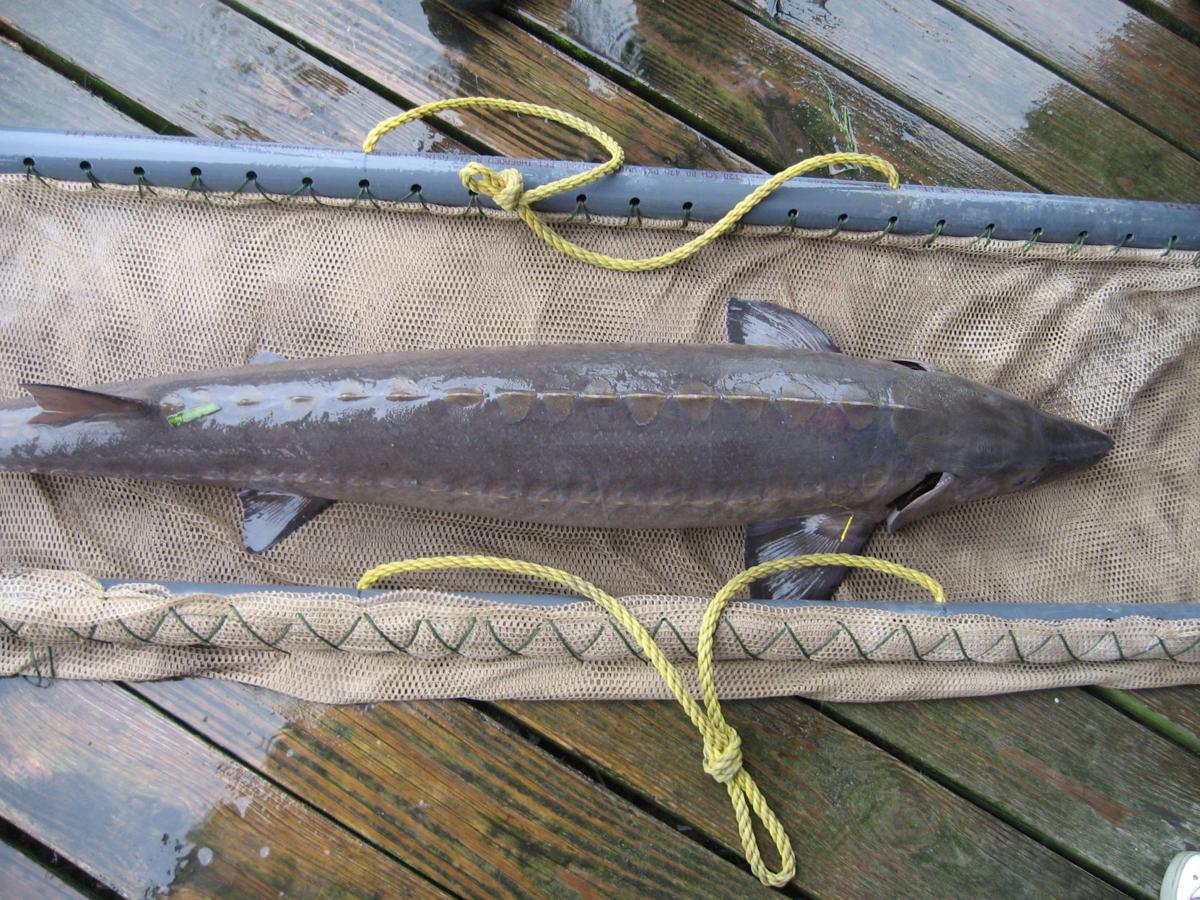 The state Department of Environmental Conservation released a final Lake Sturgeon Recovery Plan this month aimed at restoring self-sustaining populations in New York. Local sturgeon populations are on the rise, according to officials, and the fish — which can grow up to 7 feet and 300 pounds — can be found in Lake Ontario, Oneida Lake and the Oswego River. Pictured above, officials from the U.S. Geological Survey net a Lake Sturgeon in the town of Minetto in 2012.

Several Lake Sturgeon captured in Minetto by the U.S. Geological Survey swim in a pen in 2012.

ALBANY — The state Department of Environmental Conservation recently unveiled a final Lake Sturgeon Recovery Plan for New York, with scientists and officials calling for monitoring and sampling in the mouth of the Oswego River — identified as a historic spawning area — and stocking approximately 500 fish in Oneida Lake each year.

Lake Sturgeon (Acipenser fulvescens) once roamed throughout the Great Lakes Region in vast numbers, but the primitive looking fish — one of the largest freshwater fish in New York — has been listed as threatened in more than 20 states following years of declining populations due to overfishing, pollution and the construction of dams that cut off spawning and nursery areas.

“This plan will provide [the Department of Environmental Conservation (DEC)] and our partners with a clear blueprint to achieve recovery of this ancient fish within our waters," DEC Commissioner Basil Seggos said. "This report is the culmination of dedicated work by our staff and the U.S. Fish and Wildlife Service, U.S. Geological Survey, Cornell University, St. Regis Mohawk Tribe, and others, including the New York Power Authority, since recovery activities began in 1992."

DEC Rare Fish Unit Leader Lisa Holst said the number of sturgeon are on the rise, and officials believe the fish could be removed from the threatened species list in the coming years.

“We think we’re getting close to the finish line,” Holst said. “The fish is returning and it was a very important component of the Great Lakes ecosystem at one time.”

Not only are sturgeon a critical component to the Great Lakes ecosystem, but the fish is also relatable to many people because their life history and life span is similar to humans, according to Dimitry Gorsky, a Fish and Wildlife Biologist with the U.S. Fish and Wildlife Service, who noted the fish live a similar number of years as humans, grow more slowly as they age and don’t become sexually active until after their teenage years.

“And I think people connect to them a lot in that sense,” Gorsky said. “And it’s also pretty cool to have a fish that grows over six-feet long.”

The DEC anticipates the continuation of current efforts and execution of the plan could provide enough evidence of Lake Sturgeon recovery to initiate removal of the fish from the threatened species list in New York no later than 2024.

“The work that is going on is definitely showing positive results,” Gorsky said. “There’s more sturgeon now than there was 20 years ago, and we’re seeing natural reproduction in areas that we didn’t before.”

Native to the Mississippi River Basin, Great Lakes Basin and Hudson Bay Region, the fish is found today throughout the Great Lakes Region, including Lake Ontario, Lake Erie and Oneida Lake, but populations are just a fraction of historic levels.

“We’re at a very low percentage of what was historic,” Gorsky said, adding some estimates have placed current populations as low as 10 percent of levels found in the 19th century. “I think what we’ve learned is that recovery can take a long time. The signs are very good, but it does seem like we still have a long way to go.”

Commercial fishing, dam building and habitat loss decimated Lake Sturgeon populations before 1900, with the once abundant fish prized for their meat and caviar. The DEC estimates fishing removed 80 percent of the sturgeon in Lake Erie before 1900.

Randy Jackson, a senior research associate at Cornell University’s Biological Field Station at Shackelton Point, said the DEC stocking program placed about 8,000 fish in Oneida Lake between 1995 and 2004. The stocking program was put on hold for a decade due to concerns over a virus, but restarted in 2014 and now stocks Oneida Lake with about 500 Lake Sturgeon between five and eight inches in length each year.

Gorsky, who’s work focuses largely on sturgeon in the lower Niagara River, said the DEC recovery plan is impressive and noted it commits to a stocking program for the next 20 years.

“When we do these stocking programs eventually we’ll increase the adult population until it reaches a point it’s able to sustain itself through natural reproduction,” Gorsky said.

There have been no stocking programs in the Oswego River in recent years, and the thousands of fish released in Lake Ontario enter the lake in Chaumont Bay in Jefferson County. Monitoring, habitat improvements and other management strategies are planned for the Oswego River system, which fish enter largely from Oneida Lake.

Sturgeon populations in Oneida Lake are “very robust,” Holst said. Some of the first fish stocked in the early 1990s are “well over 100 pounds,” according to Holst, who said it’s possible people could start to encounter fish that large.

“We know we have 100 pound fish out here, we just haven’t handled them yet,” he said, noting fish that were nearing 100 pounds several years ago would have certainly crossed that threshold.

From Oneida Lake, the fish are able to navigate through the canal system, and are able to travel all the way to Lake Ontario.

“We know we have movement of Lake Sturgeon in and out of the canal system,” Jackson said. “Most of the fish that end up in Oswego are from Oneida Lake.”

There have always been fish in Lake Ontario, Jackson said, but populations were driven down significantly due in large part to overfishing. Sturgeon populations fell dramatically in the 1800s, Jackson said, due to just two to three decades of being “very heavily overfished.”

“That’s all it took,” Jackson said.

Part of the reason sturgeon populations were so heavily impacted by overfishing is the slow rate of maturity and reproduction, which makes the species particularly vulnerable. According to the DEC, male sturgeon become sexually mature between eight and 12 years of age, with females becoming sexually mature between 14 and 33 years of age. Male sturgeon can live more than 50 years, and females can live as long as 80 to 150 years.

Gorsky said sturgeon reproduce in the spring by running up tributaries to spawn, and noted the monitoring programs typically happen in the spring in known or suspected spawning areas. Officials are working on ensuring the fish have access to spawning grounds and that the habitats are intact, he said, noting even when sturgeon do have access to spawning grounds, changes in land use practices can fill some nursery areas with silt and mud.

“They prefer fast-flowing, high oxygen water, so anything that changes that availability can be a problem for them,” Gorsky said.

Scientists believe, however, if the current path continues, sturgeon populations could eventually be self-sustaining and annually stocking could cease. Jackson said Lake Sturgeon “appear to be on the way” toward a sustainable, self-reproducing population, which he said is “always the goal.”

Locally, Holst said the fish are seen regularly in the town of Minetto and city of Fulton, and officials believe the fish is trying to spawn in the Oswego Harbor. She warned anglers should be careful not catch sturgeon, especially while fishing for Walleye, and said if a sturgeon is hooked it should be returned to the water as soon as possible.

Sturgeon eat zebra mussels (Dreissena polymorpha) and the round goby (Neogobius melanostomus), both invasive species in Lake Ontario, Holst said, noting a secondary effect of species recovery could put a dent in some invasive species populations.

Years from now, after the fish is removed from the threatened species list and recovery targets are met, officials could eventually consider what Holst called “a sustainable angling program,” but noted it would require very close monitoring due to the species’ life span and may have to be a catch and release program.

“That’s not to say it would never happen, but it would certainly be a lot of work and management intensive,” Holst said. “We would have to protect spawning fish and keep an eye on harvesting rates if harvesting were to be allowed.”

Officials are “several years off” from that decision-making,” she said, but added things are looking positive as populations rise across the state.