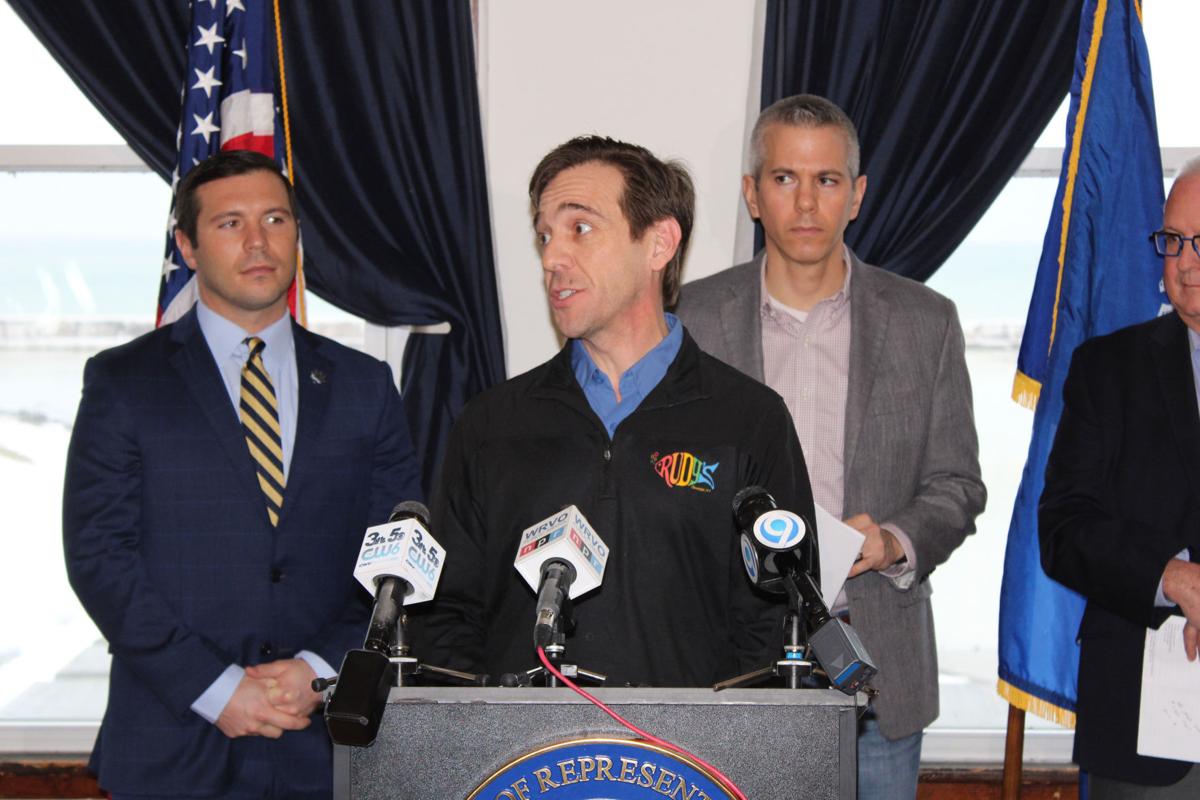 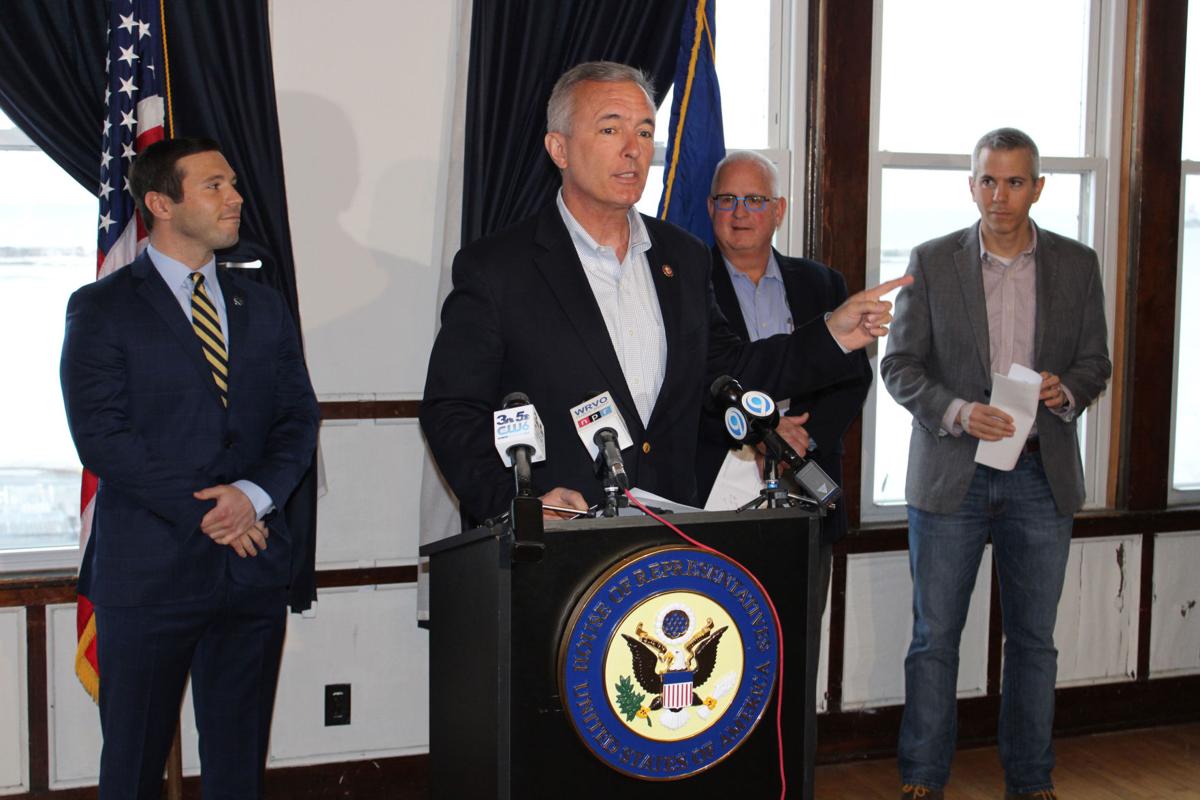 OSWEGO — With Lake Ontario water levels more than 18 inches above average for this time of year and the looming threat of another year of floods, U.S. Reps John Katko and Anthony Brindisi Monday announced legislation that would strip international regulators of the immunity granted to them more than a century ago.

Lake Ontario water levels reached a then-record high 248.95 feet in May 2017 before hitting 249.08 feet — the highest level in more than 100 years of record keeping — in June 2019. Local, state and federal lawmakers have blamed the International Joint Commission (IJC), the U.S.-Canadian body that regulates shared waterways between the two nations, and the current water management strategy, known as Plan 2014, for the high waters and resulting damage in recent years.

Brindisi, D-Utica, and Katko, R-Camillus, are among the lawmakers who have continually criticized the IJC and Plan 2014, which was put in place immediately preceding the flooding in 2017. On Monday at the Roy C. McCrobie Building in Oswego, the pair introduced their imminent legislation that would allow communities to file currently prohibited lawsuits against the IJC.

“It will allow shoreline communities to pursue lawsuits against the International Joint Commission for damages caused by flooding and persistent high water levels,” Katko said. “These people need to have a course of action.”

The Boundary Waters Treaty of 1909, which established the IJC, also granted the organization immunity from legal action. Katko and Brindisi’s legislation would eliminate that immunity and allow communities to file lawsuits seeking compensation for any damages allegedly caused by IJC.

“Currently the IJC can hide behind a blanket immunity and not be held accountable for their actions, or in this case their inaction,” Brindisi said.

International regulators approved Plan 2014 in December 2016 after more than a decade of scientific study, public engagement and governmental review, according to the IJC. Officials said the plan would allow for more natural variations of water levels, restore the health and diversity of coastal wetlands and protect against extreme high and low water levels.

“Since that time we’ve had nothing but devastating flooding,” Katko said of the years since Plan 2014 was enacted.

Both congressmen said efforts to work with the IJC to increase outflows from Lake Ontario and take other action to reduce the likelihood of flooding have largely been unsuccessful. Katko described dealing with the IJC “like talking to a brick wall,” adding the congressmen are “just not getting action from them.”

“So today, the gloves come off. We’ve had enough,” an animated Katko said. “You’re going to hear a lot of doublespeak from them and a lot of scientific mumbo-jumbo from their so-called experts on the commission, but the fact of the matter is it’s an irrefutable fact that things profoundly changed on the shoreline once Plan 2014 went into effect. It’s either the greatest coincidence in the history of mankind, or Plan 2014 has had a terrible effect and it has to be stopped.”

Brindisi compared the IJC to an “absentee landlord” that is immune from any legal action tenants might want to pursue. He said the IJC is immune to lawsuits “from homeowners and business owners along the shoreline who have been devastated year after year by their inaction and their incompetence.”

“Season after season we have seen flooding that has ravaged homes, it has ravaged businesses in the community and along the shoreline of Lake Ontario,” said Brindisi. “And local economies have taken a hit year after year. Our families, our homes, our schools, our communities have seen this devastation and it could all be prevented if the IJC were willing to step up and do the right thing.”

IJC Spokesperson Frank Bevacqua said “the IJC does not have the ability to prevent flooding,” particularly in situations, such as the current one, in which extremely high inflows occur simultaneously on both sides of the Moses-Saunders Dam.

“Our International Lake Ontario-St. Lawrence River Board has been taking every action to reduce the risk of flooding this year by setting flows to the maximum rate that ice conditions in the St. Lawrence River will allow,” Bevacqua said. “Lake Ontario outflows during the winter of 2019-2020 have to date been the highest for any winter on record.”

Bevacqua said setting Lake Ontario outflows is “a difficult and delicate balancing act” that can impact shoreline property and commercial interests both upstream and downstream. He said the IJC was granted immunity from legal action “because the courts and domestic political institutions are not well positioned to manage international waterways.”

Brindisi said local congressional representatives have given the IJC every opportunity to take action, but the commissioners “continue to think they aren’t accountable.”

“Now we are taking action,” Brindisi said. “Our IJC Accountability Act will level the playing field and allow members of the community to have their day in court. It’s time the IJC is held accountable for their carelessness, their futility and inaction.”

Oswego Mayor William J. Barlow Jr. noted the city of Oswego has sustained more than $7 million in damages due to high waters and flooding in recent years. Barlow blamed Plan 2014 for intensifying the impact of high waters, and expressed gratitude “for the constant support shown by both congressmen Katko and Brindisi” to try to get the plan reversed or addressed.

“Plan 2014 and the associated high water levels are having a huge impact on the city of Oswego, our local economy, and I suspect Cayuga County, Oswego County and the other counties along the lake,” Barlow said. “We thrive off of our boating industry, our tourism industry and all the assets associated with our waterfront.”

Business owners, town supervisors and village mayors joined Katko, Brindisi and Barlow on Monday, expressing their own frustrations with high water levels and the IJC’s response.

Richland Supervisor Dan Krupke called the recent shoreline flooding events “mostly a man-made disaster,” and said the economic impact on the surrounding community is “far-reaching” as many businesses depend on seasonal recreation and tourism.

Jason Livesey, a third-generation owner of Rudy’s Lakeside Drive-In, thanked the congressmen for remaining engaged on  the high water levels issue, and said Plan 2014 has drastically impacted his business and the community.

“Hopefully this legislation will make the IJC understand that the effect that they’ve had has been so great and so detrimental,” Livesey said. “This has cost many, many thousands of dollars and is only going to continue to cost thousands and thousands more. It’s going to profoundly change the lakeshore from this point forward. It has changed my business and it will forever have an impact.”

Livesey expressed some optimism the legislation and the attention placed on the issue would result in the IJC “finally starting to listen to those of us who have been affected.”

Katko said Plan 2014 “from the beginning was flawed,” noting it should have provided some avenue for shoreline property owners to seek reparations for damages resulting from the water management strategy’s allowance for higher water levels. He said the previous water management strategy, known as Plan1958-DD, worked well for more than 50 years and property owners developed the shoreline based upon those conditions.

“It was working and then all the sudden it’s like a light switch went on and things got terrible,” Katko said.

Barlow and other municipal leaders noted the state has provided funding for various projects through the Lake Ontario Resiliency and Economic Development Initiative (REDI) and other programs, but if high water continues those projects cannot be completed.

“The water is preventing us from actually being able to do these projects,” Barlow said. “So not only are we sustaining a considerable amount of damage because of the high water, but the high water — the unnecessarily high water because of Plan 2014 — is stopping this community from moving forward.”

With Lake Ontario water levels currently higher than the early March levels of either 2017 or 2019, both of which resulted in major flooding, a spokesperson for the U.S. Army Corps of Engineers last week said forecasts show a roughly 35 to 40 percent chance of widespread flooding again in 2020.

Quote from the Detroit Free Press from Jan 23, 2020 :"The high water levels in Lakes Superior, Michigan and Huron are breaking records, and state officials fear that the waters could rise another foot in 2020 if rainy weather comes anywhere near the deluges that hit the state last year." Unless my geography is incorrect, Lake Ontario is fed from these bodies. Not sure the Joint Commission can control weather.

And is the IJC capable of being sued? Do they have any assets? LLC?