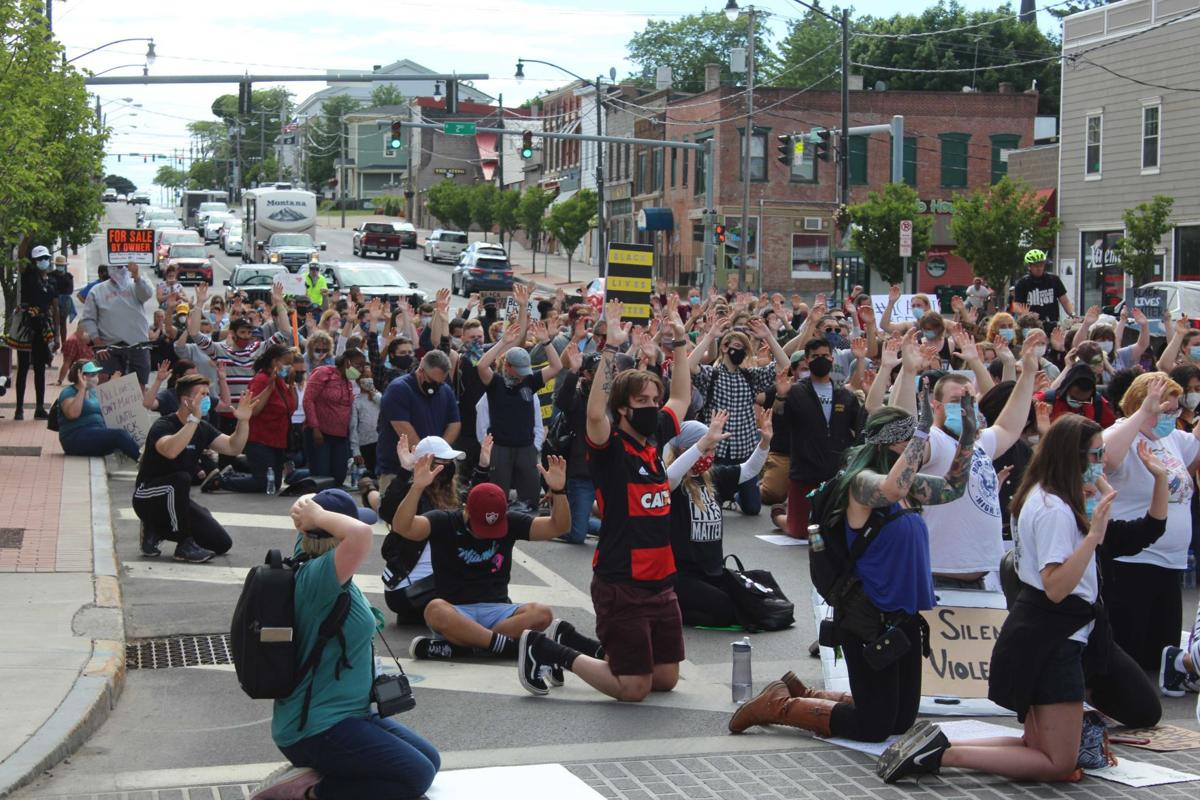 Protesters kneel for 8 minutes and 46 seconds Sunday afternoon at the intersection of West Bridge and West First streets. The time is the same amount as a Minneapolis police officer applied a chokehold to George Floyd, killing the unarmed black man on May 25. 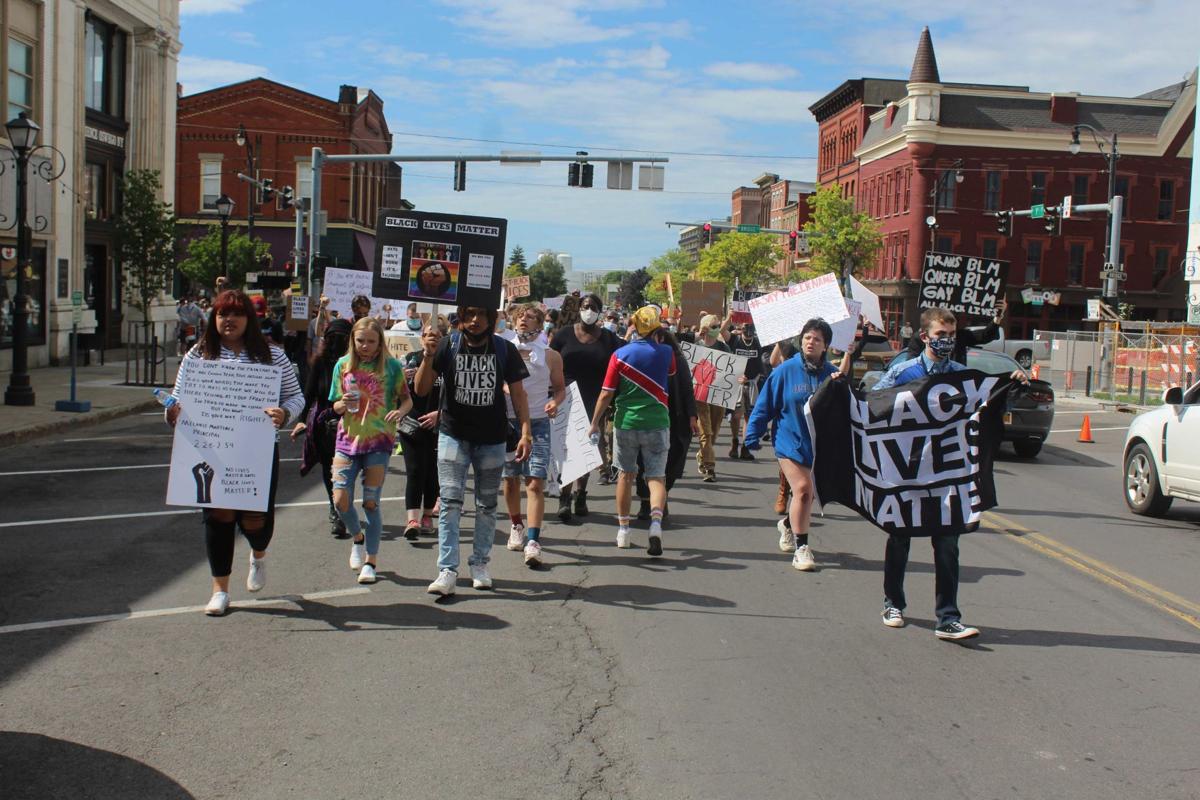 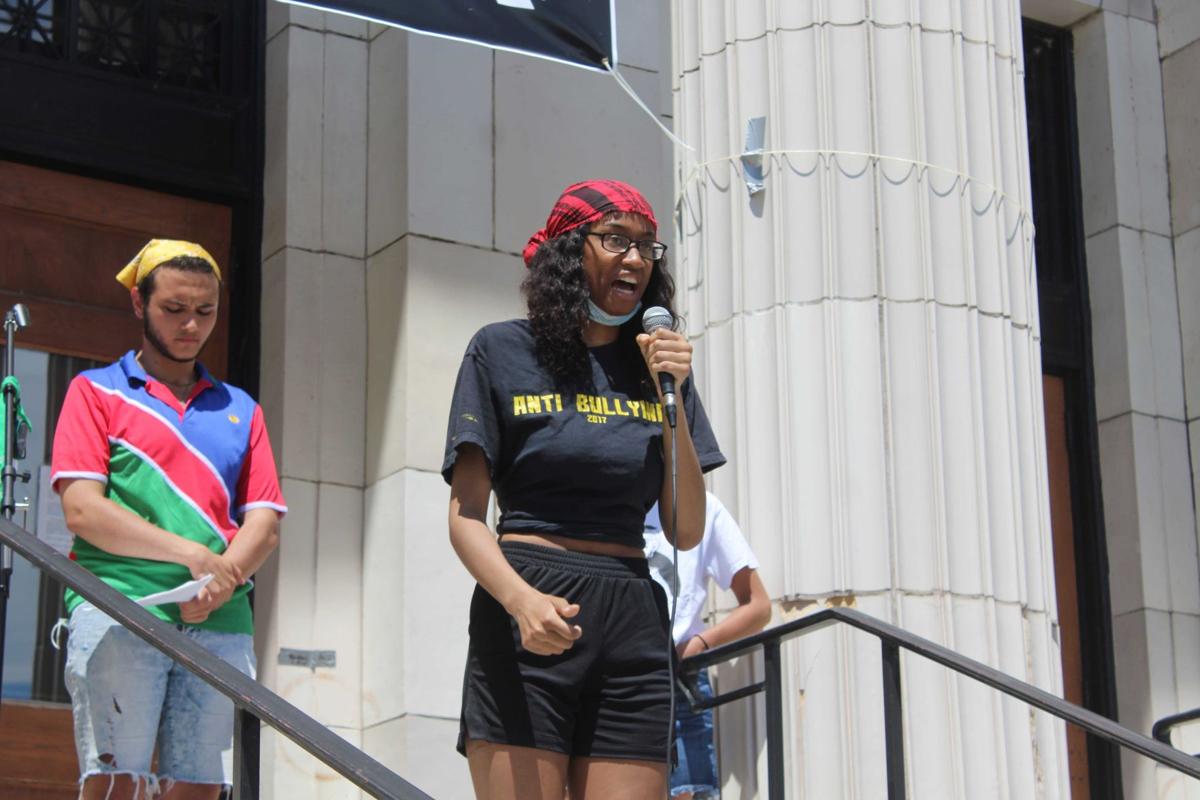 Keonna Wren speaks during Sunday's protest with Omar van Reenen behind her. 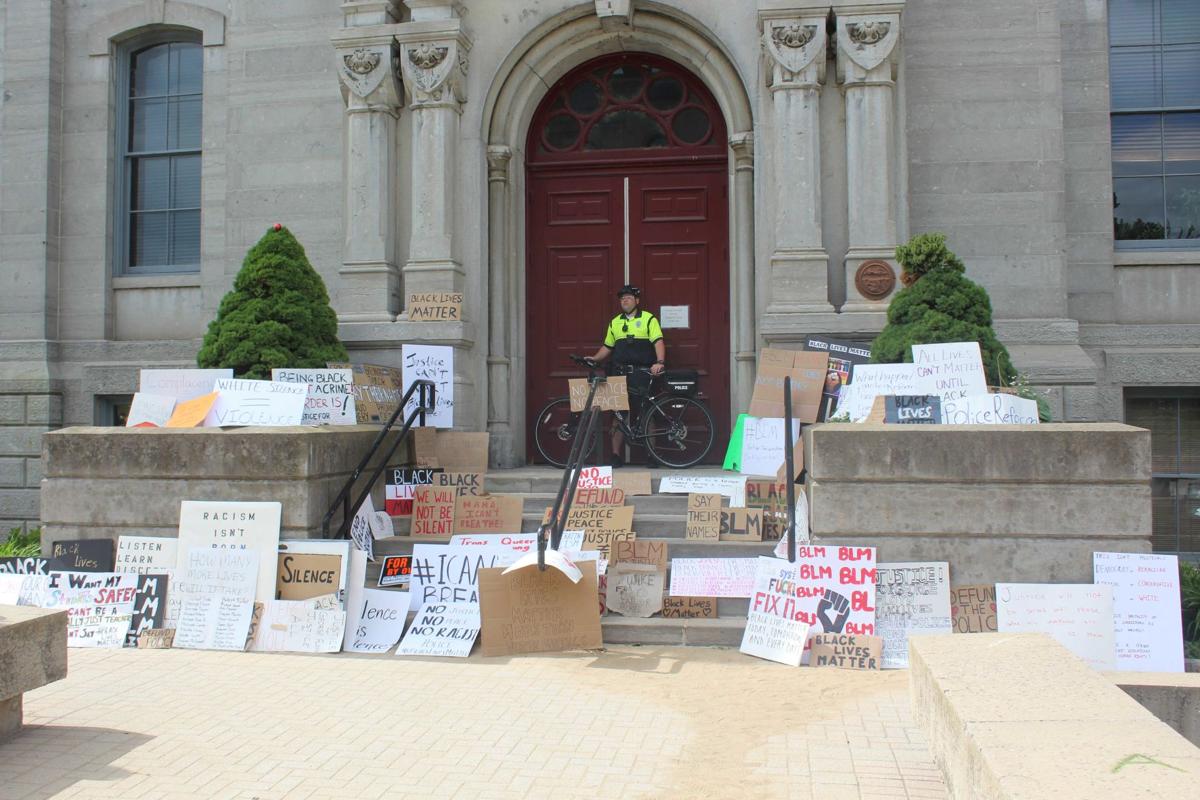 Protesters Sunday left their signs on the steps of City Hall as a message to Mayor Billy Barlow.

Protesters kneel for 8 minutes and 46 seconds Sunday afternoon at the intersection of West Bridge and West First streets. The time is the same amount as a Minneapolis police officer applied a chokehold to George Floyd, killing the unarmed black man on May 25.

Keonna Wren speaks during Sunday's protest with Omar van Reenen behind her.

Protesters Sunday left their signs on the steps of City Hall as a message to Mayor Billy Barlow.

OSWEGO — Protesters on Sunday again filled the streets of the Port City as a coalition of local activists celebrated the end of American slavery and called for specific changes in local policing and diversity policies.

Cooler temperatures and a light breeze hosted a more relaxed crowd than gathered at a previous protest at Oswego City Hall on May 31. A distinct current of anger and frustration ran through that nonetheless peaceful assembly, shaken and outraged at the killing of unarmed black man George Floyd in Minneapolis last month. Sunday’s demonstration was punctuated by emotion and compassion from speakers at SUNY Oswego’s Sheldon Hall, where large yellow letters spelled out Black Lives Matter on the college blacktop.

“America, I’ve been silent for way too long. Hear black women when we speak,” said Keonna Wren, a past president of the SUNY Oswego Black Student Union. “People aren’t hearing me when I say black lives matter. When you say ‘all lives matter’ – my people don’t matter. I am afraid of the police, I am afraid of my people getting shot and not making it home. No one should feel that way. The tears feel normal.”

Speaking on the steps of Sheldon Hall to an audience of several hundred, Wren told the crowd in a pained, strong voice about growing up as a black woman and the lessons she was forced to learn.

“I learned at a very young age, when my mom had the sit-down talk. How many of your moms had the sit-down talk about the police with you?” Wren asked. “Your mom had to tell you, when you see the police, please be quiet. Don’t be too loud. Follow all the directions. When you go to school, be polite. Walk this way. Talk this way. We shouldn’t be fighting for basic rights of humanity.”

The latest protest was again organized by the SUNY Oswego Student Association, Black Student Union and Accept Oswego, a group founded to support local LGBTQ youth, among others. In addition to remembering the lives of black men and women ended by police — Breonna Taylor, George Floyd and Sandra Bland’s names were chanted out loud in memorial several times — Sunday’s event also commemorated the upcoming Juneteenth holiday. Juneteenth is celebrated on June 19, traditionally considered the end of American slavery.

After beginning the day at Sheldon Hall, the crowd marched the short distance to SUNY Oswego’s Culkin Hall, which houses the college’s senior leadership offices. Event organizers earlier in the week released a list of demands for Oswego Mayor Billy Barlow and SUNY Oswego President Deborah Stanley, largely related to redistribution of resources away from law enforcement and to other public services like mental health treatment. The demands also called for, but was not limited to, bans on types of choke holds used by police, an overhaul of racial sensitivity training and endeavors and, in a more symbolic gesture, for the Black Lives Matter flag to be raised on campus and at City Hall.

In a brief meeting and dialogue with Stanley outside Culkin Hall, the longtime college president said she valued the students’ contribution in support of “positive change and reform.”

“Across the nation, people of color and their allies are mobilizing to address structural and systemic racism,” said Stanley, who on Friday personally ordered the painting of the Black Lives Matters message on the Sheldon Hall driveway. “I pledge to you that SUNY Oswego will live its educational mission to the fullest, and with deep commitment and understanding, we will be unwavering in pursuing justice, equality and peace. We will not rest.  I hear you, I am listening to you, I stand with you.”

After raising the Black Lives Matter flag outside Culkin Hall, protesters had one down and one to go as they marched from campus to Oswego City Hall. While Barlow was not present, protest leaders laid out their demands over a bullhorn in Don R. Hill Civic Plaza and successfully raised the flag on one of the municipal flagpoles.

“This is what the revolution looks like,” said former SUNY Oswego Student Association President Omar van Reenen. “This is not performative change — this is transformational change. We’re calling for accountability and inclusiveness for all people in this community.”