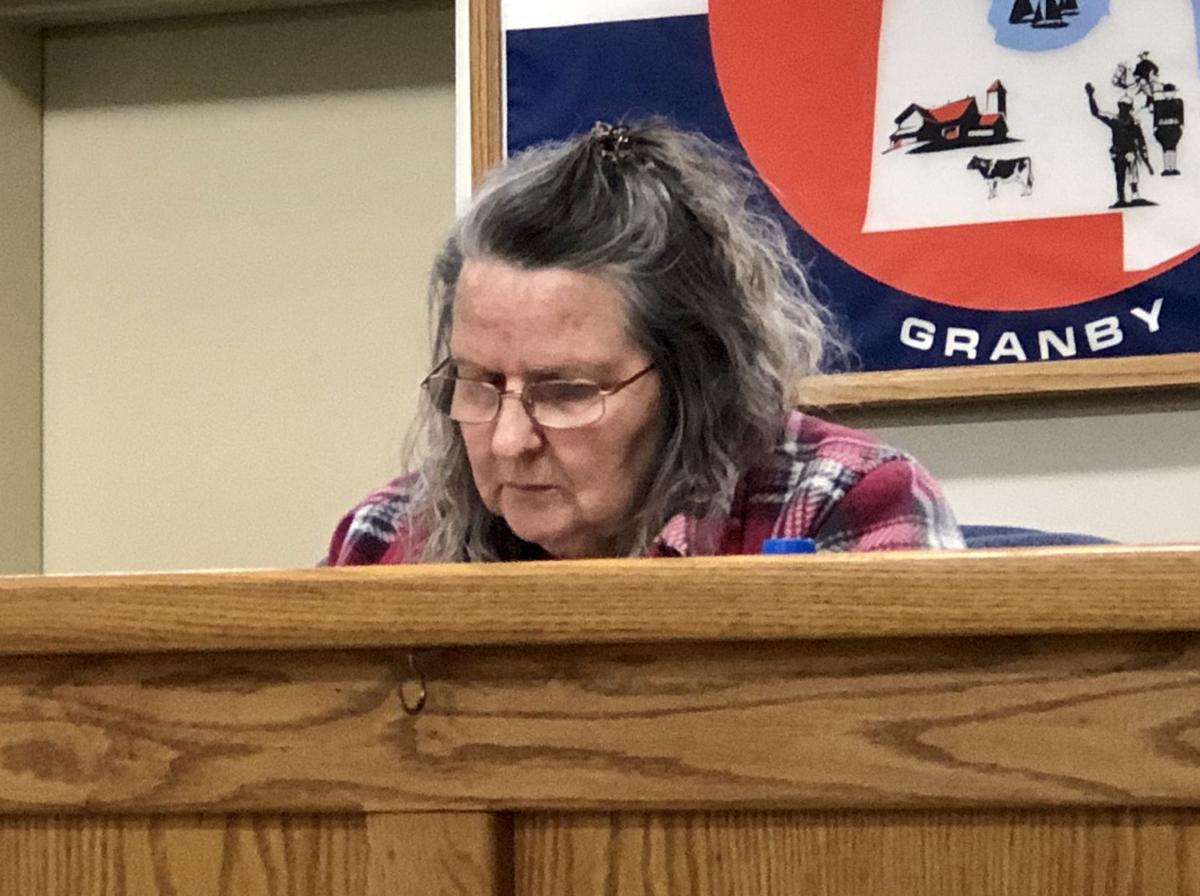 Granby councilor Cheryl Holmes, who along with her husband faces a series of election-related crimes, makes notes during the Granby Town Board earlier this year. 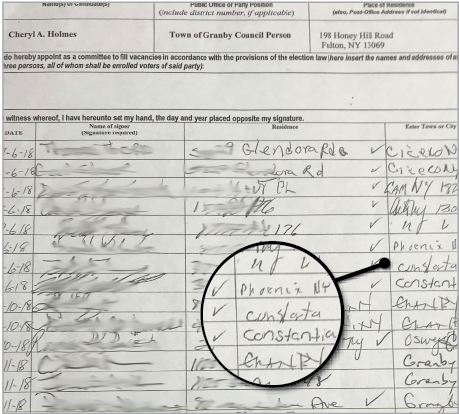 With names and addresses blurred, the designating petition of Cheryl A. Holmes for Granby Town Council, above, clearly contains signatures from individuals living outside Granby — Phoenix and Constantia, shown inset and enlarged. Cheryl and her husband Leslie Holmes are accused by state police of a litany of election crimes “with intent to defraud.”

Granby councilor Cheryl Holmes, who along with her husband faces a series of election-related crimes, makes notes during the Granby Town Board earlier this year.

With names and addresses blurred, the designating petition of Cheryl A. Holmes for Granby Town Council, above, clearly contains signatures from individuals living outside Granby — Phoenix and Constantia, shown inset and enlarged. Cheryl and her husband Leslie Holmes are accused by state police of a litany of election crimes “with intent to defraud.”

SYRACUSE — The Granby couple arrested in December and charged with a variety of election-related crimes appeared before a judge Tuesday as the case moves forward in Onondaga County Court.

Tuesday’s court appearance was brief, with Cheryl Holmes and her attorney appearing before Onondaga County Court Judge Stephen Dougherty, but Leslie Holmes’ and his lawyer did not face the judge. Dougherty, however, noted Leslie Holmes’ attorney informed the court he was still reviewing discovery documents.

Prosecutors detailed the status of the case, noting all grand jury and other discovery materials were turned over to defense attorneys earlier this month, and a plea offer was made to the Holmeses. It’s not yet clear what the offer is or if the defendants are interested in accepting a plea deal.

Assistant Attorney General Mary Gorman, who is prosecuting the case, said the attorney general’s office turned over more than 600 pages of documents related to the case to defense attorneys. Gorman said prosecutors are ready for trial.

If the Holmeses are not interested in prosecutors’ plea offer, the case would likely head toward trial and dates for motions would be scheduled at the Feb. 5 court appearance.

State police charged Leslie Holmes with seven counts of second-degree possession of a forged instrument, a class D felony, one count of first-degree offering a false instrument for filing with intent to defraud, a class E felony, four counts of making a punishable false written statement, a class A misdemeanor, four counts of misconduct in relation to election petitions, an unclassified misdemeanor, and one count of primary election violations, an unclassified misdemeanor.

Individuals seeking to contest the overwhelming majority of elected offices in New York state, from town and village boards to judgeships and even the governor’s seat, are required to collect signatures from voters in their intended constituency to earn a spot on the ballot. The resulting document with signatures is called a designating petition.

Court records reviewed by The Palladium-Times show the charges against the Granby couple are related to the submission of bogus designating petitions for Cheryl Holmes’ run for Granby Town Council in 2018, which according to law enforcement contained forged signatures including some forgeries of deceased individuals’ signatures.

Cheryl Holmes, a Republican elected to a one-year term on the town board in 2018 to fill a vacancy, is facing one count each of first-degree offering a false instrument for filing with intent to defraud, making a punishable false written statement, misconduct in relation to election petitions and primary election violations.

The felony charges the Holmeses face for first-degree offering a false instrument for filing is related to prosecutors’ alleging the couple knowingly provided designating petitions to the Oswego County Board of Elections that contained false statements and information.

Charges the Holmeses are facing for making a punishable false written statement is related to their alleged false statements on the witness portion of the designating petition.

Both individuals were also charged with an unclassified misdemeanor at, or in connection with primary elections, caucuses, enrollment in political parties, committees and conventions. According to the indictment, those charges are connected to the pair’s fraudulent or wrongful acts “tending to affect the result of the 2018 primary election for a Town of Granby Town Council seat.”

For more than a year, the couple was under investigation for the alleged improprieties, and a 19-count indictment from an Oswego County grand jury was filed Dec. 13. The indictment details the alleged crimes, but does not offer significant supporting documentation.

Law enforcement officials with knowledge of the case said an initial complaint of petitions including signatures from individuals outside the district and individuals signing more than once was initially brought to local law enforcement and turned over to the state Attorney General.

Documents obtained by The Palladium-Times show irregularities and inconsistencies in the designating petitions submitted for Cheryl Holmes. Leslie Holmes served as a witness for the majority of the signatures, which include individuals signing multiple times and signatures from non-residents.

Above the witness signature line on the petitions, which both Holmes signed, is a notice that states the material “will be accepted for all purposes as the equivalent of an affidavit and, if it contains a material false statement, shall subject (the signer) to the penalties as if (the signer) had been duly sworn.”

In November, Cheryl Holmes was re-elected to the town board for a two-year term, which started Jan. 1. She has not resigned from her position.

According to New York State Public Officers Law Article 3 Section 30, public offices shall be vacant upon the office holder’s conviction of a felony or a crime involving a violation of the oath of office. The Holmeses have been charged but not convicted and are innocent until proven guilty.