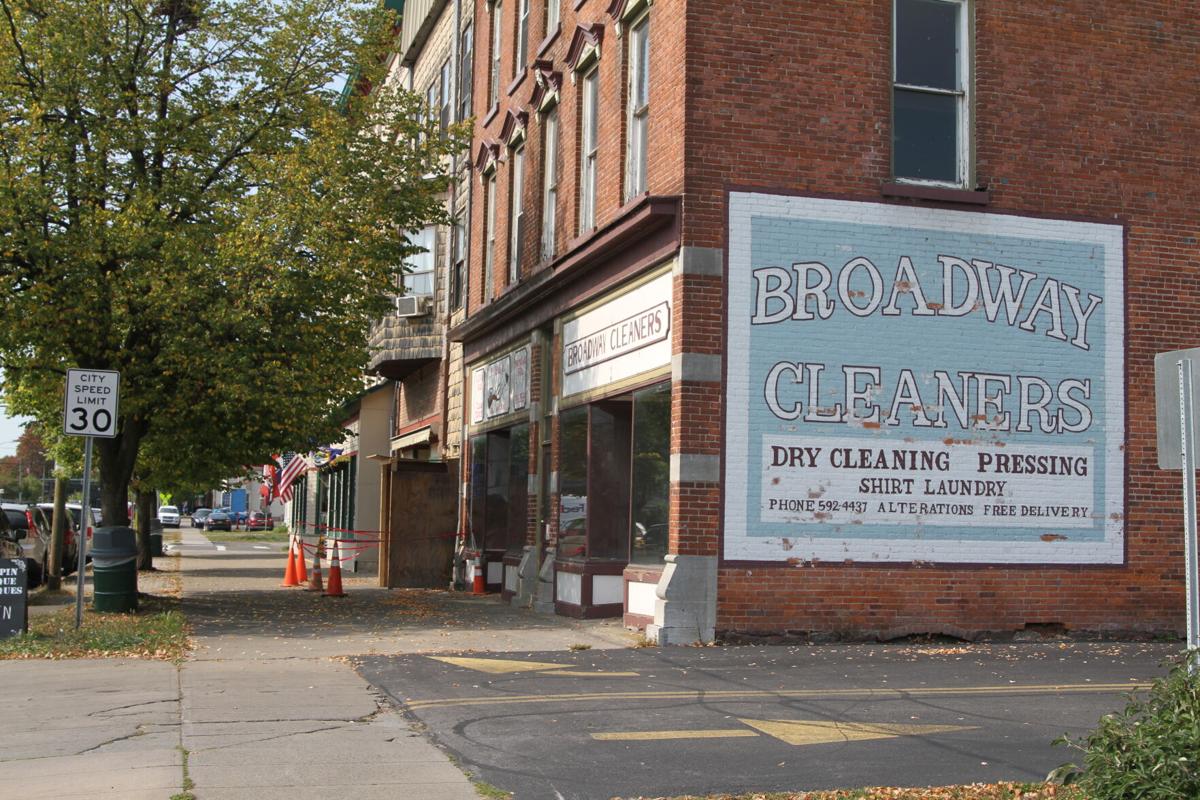 The city of Fulton's West Broadway Commercial Historic District was recently nominated for both the state and National Register of Historic Places. The eight-building area is comprised of most of the structures lining West Broadway in Fulton between state Route 48 and West Second Street, including the former Broadway Cleaners at 114-116 West Broadway, pictured above, which was built in 1886 by local contractor-builder George Emeny and originally featured two storefronts. 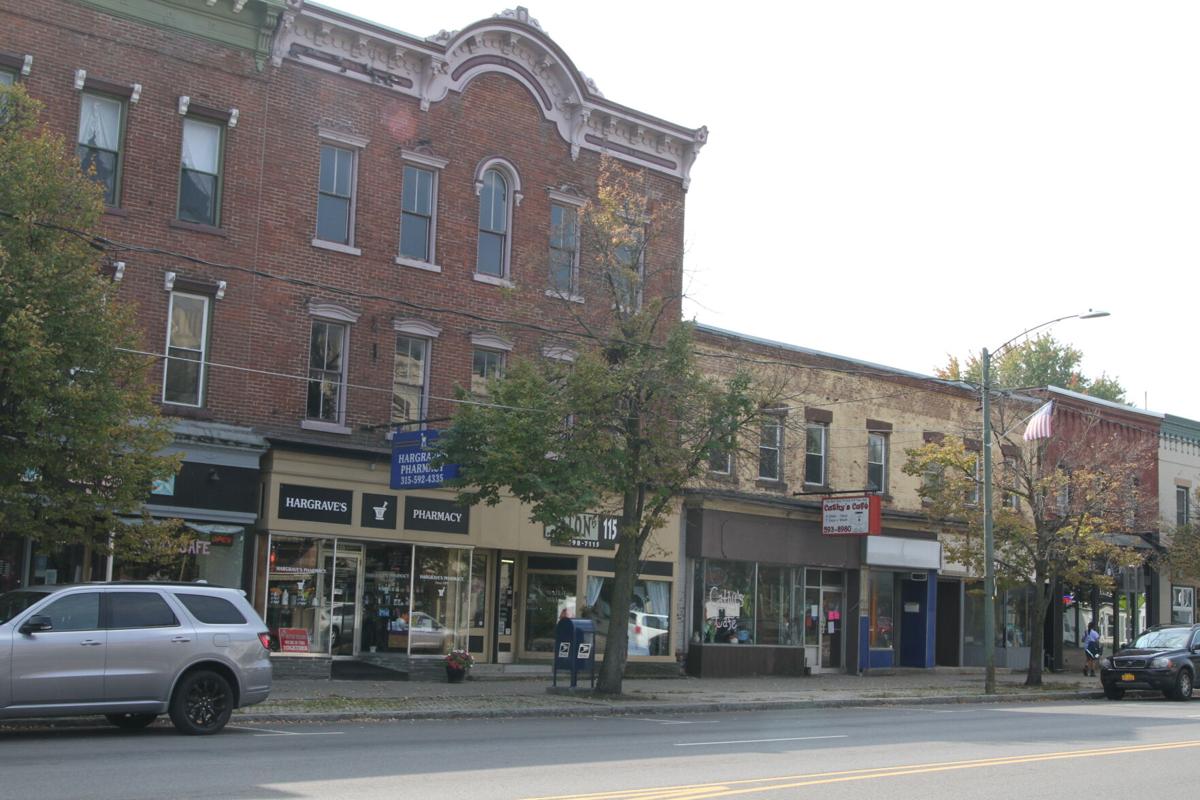 Some of the eight buildings included in the historic nomination are pictured above, on the south side of West Broadway.

The city of Fulton's West Broadway Commercial Historic District was recently nominated for both the state and National Register of Historic Places. The eight-building area is comprised of most of the structures lining West Broadway in Fulton between state Route 48 and West Second Street, including the former Broadway Cleaners at 114-116 West Broadway, pictured above, which was built in 1886 by local contractor-builder George Emeny and originally featured two storefronts.

Some of the eight buildings included in the historic nomination are pictured above, on the south side of West Broadway.

FULTON, N.Y. – The West Broadway Commercial District in Fulton was one of 18 sites recently nominated for state and national registers of historic places by the state Historic Preservation Board.

The West Broadway Commercial District, which included upper story apartments and everything from a newspaper to a grocery store on the lower floors, is nominated for the National Register of Historic Places along with 17 other sites around New York. The 17 properties nominated by the state will be listed on the New York State Register of Historic Places, and, if approved by federal officials, would be entered into the National Register.

“These historic locations highlight so much of what is exceptional about New York and its incredible contributions to our nation's history,” Gov. Andrew Cuomo said in a statement announcing the nominations. “By placing these landmarks on the state and National Register of Historic Places, we are helping to ensure these places and their caretakers have the funding needed to preserve, improve and promote the best of this great state.”

Located on West Broadway between West Second and West First streets, the roughly 1-acre, eight-building commercial district in Fulton includes much of the remaining late 19th and early 20th century commercial architecture in the city. The state and national registers are official lists of buildings, structures, districts, landscapes, objects and sites of historical significant, and more than 120,000 historic properties in New York are listed on the National Register of Historic Places.

Fulton Mayor Deana Michaels expressed excitement about the announcement, adding Fulton's past should be honored and respected and the nomination is vital to preserving the city's story for generations to come. Michaels said the city's past tells a story that helps “pave the way for the next chapter of Fulton's growth.”

“The Broadway Commercial District is a beautiful area of our city that is deserving of this recognition,” the mayor said. “If approved, this opens doors to much-needed funding, grants and additional preservation support. And it will tie in nicely to the proposed (Downtown Revitalization Initiative) projects for the historical downtown area.”

Each of the brick buildings was built between 1877 and 1901, with the majority constructed in the 1880s, according to the nominating application. The nomination application called the building stock “characteristic of American 'main street' commercial architecture built during the Late Victorian era, and notes much of the surrounding architecture from the era has been lost.

“Considered as a group, the eight buildings included in the nominated historic district retain the density and streetscape characteristics that mark them as a small commercial quarter, and they remain the city of Fulton’s last intact, turn-of-the-century commercial area,” the nominating application states, adding the proposed district is “comprised of a coherent group of brick buildings that portray the commercial development of this part of Fulton beginning in the last quarter of the 19th century.”

Oswego County Historian Justin White said he was glad to see the Fulton site receive the nomination, adding a national register of historic places designation or other recognition to local historic landmarks can provide a sense of community pride.

“Each building has its own story,” White said “We try to promote in the best possible way that there's value in local history and architecture.”

White said typically if the state nominates or approves a project, the federal approval — from the U.S. Department of the Interior and National Parks Service — is also likely.

Starting with Urban Renewal initiatives in the 1960s, the majority of historic structures on Fulton's east side were demolished to make way for more modern development. Over the years more historic buildings were lost, including as recently as 2009 when a historic church adjacent to the nominated commercial district, which White called “the beautiful Congregational Church,” was razed to clear the way for a parking lot.

The Heritage Foundation of Oswego County made an effort to save the former church, but ultimately was unsuccessful.

White said Fulton, like so many cities across central New York, were affected by the Urban Renewal projects of the 1960s that sought to modernize downtown and urban areas. Historic architecture in both Fulton and Oswego fell victim to urban renewal, White said, with the east side of the Oswego River in Fulton and Oswego suffering the most.

“You wouldn't recognize the city if you came back to town 100 years later,” White said of the cities' east sides. “For our generation, it's hard to conceptualize how the city once looked, because there were some really phenomenal buildings, factories, churches and schools in both communities.”

Oswego County received another nomination in addition to the West Broadway Commercial District in Fulton, a one-room schoolhouse in East Amboy known as Amboy District No. 2 Schoolhouse.

According to the nominating application, Amboy District No. 2 Schoolhouse “offers itself as a representative example of a later 19th century one-room school.”

“Simple in form and straightforward in internal layout, the gable-roofed one-room school was at one time a prevailing building type in the rural landscape of Oswego County and New York state,” the application reads. “The nominated school survives with many intact features dating to the late 19th century, along with its original form and with its classroom volume intact within. As such it remains an important and significant example of Amboy’s former district school educational system.”

Declining attendance forced each of the seven Amboy schools to dissolve between 1945 and 1961, with the No. 2 Schoolhouse closing in 1952.

According to the state, historic register designations can assist property owners in revitalizing properties, making them eligible for various public preservation programs and services, such as matching state grants and state and federal historic rehabilitation tax credits.

Other central New York nominations are as follows:

I wonder who sent the nomination? Anyone local? Or someone in Albany?