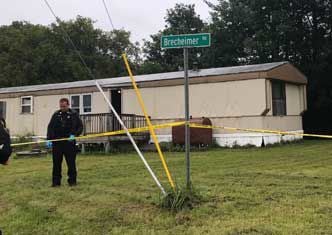 Mathew LeBoeuf, 34, pleaded guilty to two counts of second-degree manslaughter in connection to the deaths of Robert Diffin and Michael Shane. Pictured is the scene of the Sept. 10, 2018 on Brecheimer Road in the town of West Monroe. 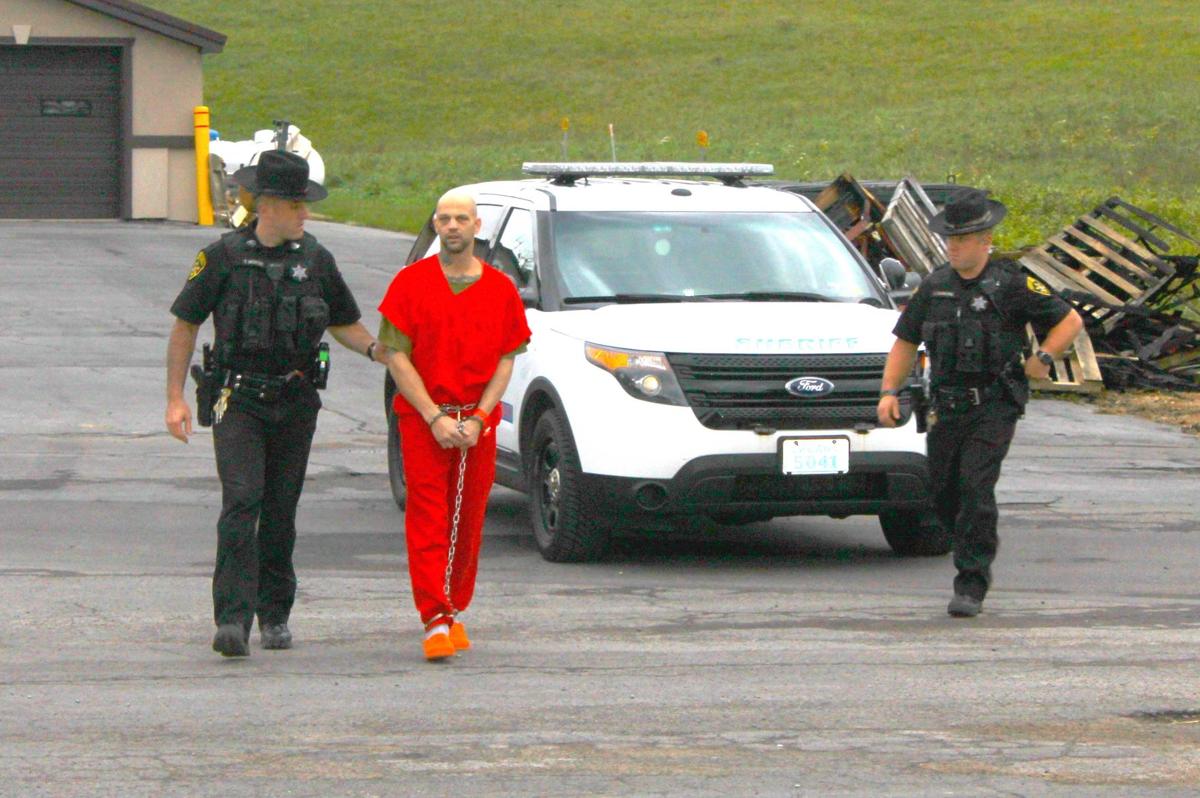 Mathew LeBoeuf, pictured above last year being escorted into the West Monroe Town Court, pleaded guilty to two counts of second-degree manslaughter for bludgeoning two of his friends with a table leg in a bloody September 2018 attack. LeBoeuf was sentenced to 10 to 20 years in state prison.

Mathew LeBoeuf, 34, pleaded guilty to two counts of second-degree manslaughter in connection to the deaths of Robert Diffin and Michael Shane. Pictured is the scene of the Sept. 10, 2018 on Brecheimer Road in the town of West Monroe.

Mathew LeBoeuf, pictured above last year being escorted into the West Monroe Town Court, pleaded guilty to two counts of second-degree manslaughter for bludgeoning two of his friends with a table leg in a bloody September 2018 attack. LeBoeuf was sentenced to 10 to 20 years in state prison.

OSWEGO — Mathew LeBoeuf pleaded guilty to two counts of second-degree manslaughter this week after more than a yearlong court case and will spend 10 to 20 years in state prison.

An examination of the more than year-long case demonstrates the realities of the criminal justice system and challenges of recent reforms from Albany.

The manslaughter charges stemmed from a Sept. 10, 2018 incident at 347 Breckheimer Road in which authorities found two victims who ultimately succumbed to what were described as “massive injuries.” A passerby that morning called 911 and saw a man “acting strange” and pacing around her vehicle, with another individual hunched over in the doorway covered in what appeared to be blood.

Police dispatched to the scene located LeBoeuf behind a nearby home and took him into custody. The 34-year-old LeBoeuf was initially charged with two counts of second-degree murder for the deaths of 42-year-old Robert Diffin and 59-year-old Michael Shane.

The murder charges, a class A-1 felony that would have carried a sentence of 15 to 25 years on each count, alleged LeBoeuf “intentionally, knowingly, unlawfully, criminally and recklessly” caused the deaths of the two men by “repeatedly striking’ the victim’s head and torso with a “blunt object.”

Second-degree manslaughter, which LeBoeuf ultimately pleaded guilty to, is a class C felony, and indicated the grand jury concluded the Central Square man “recklessly caused the death” of Diffin and Shane.

Grand juries are tasked with determining if probable cause exists to support criminal charges. The decisions made by grand juries ultimately set the parameters for what charges could be considered in an upcoming trial.

Oswego County District Attorney Greg Oakes, who cannot comment on grand jury proceedings, said at the time “a full and fair presentation of all the evidence” in the case was provided to the grand jury.

“The grand jury ultimately determined to return this indictment for these two counts,” Oakes said last year of the second-degree manslaughter chargers. “I certainly can’t criticize their decision and I trust that they reviewed all the evidence and considered it, but we’re not privy to the deliberation process of the grand jury.”

Grand jury deliberations and actions are not subject to open records laws, so it’s not clear what led to the decision.

Authorities said LeBoeuf appeared to be impaired by drugs at the time of arrest, and toxicology reports later showed all three men were under the influence. LeBoeuf also has a documented history of mental illness, and either or both could have influenced the grand jury’s decision.

The victims' families were shocked and angered by the grand jury decision. Diffin’s sister Amy LaClair objected to the manslaughter charge, saying she found it difficult to believe LeBoeuf accidentally caused the pair’s deaths by brutally beating them with a table leg.

Speaking to The Palladium-Times, Danieu said she was “disgusted and heartbroken” and expressed frustration that “someday, way sooner than he should be, (LeBoeuf) will be free again to hurt and/or kill someone else.”

“How do you make your son feel safe when the boogey men and monsters that hurt and kill people get less time than some drug dealers,” Danieu said in June. “I’ll never understand that.”

LeBoeuf entered a not guilty plea shortly after the indictment was filed, and the case stalled for several months as prosecutors and defense attorneys filed motions and psychological evaluations were completed.

The case picked up again in late October for a Huntley Hearing. The Huntley Hearing took place over two separate days, and centered on the manner in which police obtained statements from LeBoeuf.

Prosecutors called forth several witnesses during the hearing, including the woman who made the initial 911 call and several law enforcement officers. Defense attorneys sought to show investigators did not properly read LeBoeuf the Miranda Warning and/or obtained statements after the defendant indicated a desire to remain silent.

Immediately after he was taken into custody, deputies read LeBoeuf the Miranda Warning and he responded vaguely with “fighting for my freedom, yes sir,” according to testimony.

Officers attempted to question LeBoeuf later at the Oswego County Public Safety Center and he told investigators he did not want to speak. Investigators waited about two hours and tried again, but LeBoeuf was allegedly mumbling and talking fast.

According to testimony from a sheriff’s investigator, LeBoeuf later “started talking and answering questions.”

The Huntley Hearing determined LeBoeuf invoked his right to remain silent during an interrogation but investigators continued their efforts. Investigators said LeBoeuf could not be heard during the interview, but a review of the audio recording later indicated the defendant had invoked his Fifth Amendment right and the court suppressed the statements.

Oakes said Thursday following sentencing that prosecutors believed the statements made to investigators were important to the case, as there was no physical evidence that refuted LeBoeuf’s version of the events.

Though Oakes said Oswego County Court Judge Walter Hafner Jr. “absolutely made the right decision” in suppressing the statements, the move did not help prosecutors' case.

Other statements were allowed as evidence, including a corrections officer’s testimony that during routine security rounds LeBoeuf told him he was in the house Sept. 10 with two men doing drugs and the two men began to fight.

Defense attorneys and LeBoeuf presented a version of events that prosecutors could not easily refute. Thursday in court LeBoeuf, represented in court by attorneys Mary Felasco and Paul Carey, said the incident started when he was in another room and “heard a commotion.” He told the court when he entered the room the two victims were fighting and one had a knife.

LeBoeuf said he “grabbed a table leg and swung wildly in both directions” and “blindly” swung the table leg several times causing the death of both men.

“Whether he was accurately recounting what took place or switching the roles it did seem to somewhat corroborate his story,” Oakes said of the presence of a knife with a broken blade at the scene. “His defense was that Michael Shane was the primary aggressor and that he was defending Robert Diffin. It would have been extremely difficult for us to refute that claim at trial.”

Oakes said Thursday there was “a lot of uncertainty” in the case, and noted prosecutors can never be certain how a jury will react and what the outcome might be. The court’s suppression of certain statements made by LeBoeuf — in addition to the possibility the defendant could be released under the state’s criminal justice reforms — led prosecutors to quickly seek a plea deal.

“Their primary concern was that (LeBoeuf) would be released,” Oakes said of the victim’s families, whom he met with earlier this week. “Short of a plea the court would be required to release him.”

Due to LeBoeuf’s documented history of mental illness, there were concerns his release could be a danger to the community and to himself.

The victims' families had earlier been opposed to a similar plea deal, which Hafner ultimately rejected last year, but Oakes said the families grasped the reality that LeBoeuf could be released and ultimately lent their support to the plea.

“This isn’t a situation where we’re going to rejoice at the outcome,” Oakes said in an interview Thursday. “At the end of the day we have two people who both lost their lives. This is a tragedy for the families.”

Oakes said, however, the family indicated the outcome would hopefully provide them with some closure so the healing process could start.

Speaking in court Thursday, LaClair said it hurts to hear LeBoeuf continue to say he doesn’t know why the two men were killed but added there was some satisfaction in his admission that he caused both the deaths.

“The past year and a half has been so hard and I’m glad today that it’s over with,” she said. “I hope that you spend the rest of your life in prison.”

Prosecutors said the family and Hafner — both of whom opposed a similar plea deal in September 2019 — deserve credit for recognizing the incident as a tragedy but also taking into consideration the legal and evidentiary issues in the case, as well as the harm mitigation that a plea deal provided.

“Everyone in the room realized the worst thing that could happen today was Mr. LeBoeuf be released into the community,” Oakes said. “Both for the community and for himself.”

In a statement to police, LeBoeuf’s mother told police her son has psychological issues, “frontal lobe damage” and “intermittent anger explosive disorder.” She also described him as “a drug user, saying he would “use any drug he can touch.”

A former girlfriend of LeBoeuf’s also told The Palladium-Times the Central Square man has mental issues and a drug problem.

Following sentencing this week, both Oakes and Oswego County Court Judge Walter Hafner Jr., who presided over the case, noted drug use combined with mental health issues unfortunately can lead to tragedy.

Leaving the courthouse Thursday following the conclusion of the case, both the prosecution and defense attorneys appeared to be content with the outcome. Carey, who represented LeBoeuf alongside Felasco, called the outcome fair for both sides.

Oakes said “no sentence is ever enough when two lives were lost,” but noted with the involvement of drugs and LeBoeuf’s mental health history the 10- to 20-year sentence “represents a reasonable disposition.”

THE TOWN OF OSWEGO