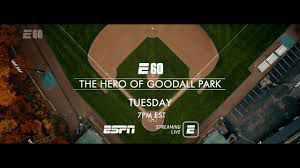 The title card for ESPN's documentary "The Hero of Goodall Park," airing tonight at 7 p.m.

ESPN’s documentary tonight “The Hero of Goodall Park” will examine the case of four lives whose interactions more than 50 years apart changed each — and in some cases, caused their deaths. Above from left: four-year-old Carolee Ashby; Darlene Ashby McCann, Carolee’s sister; Douglas Parkhurst, who killed Carolee in 1968; the mugshot of Carol Sharrow, who killed Parkhurst in 2018.

The title card for ESPN's documentary "The Hero of Goodall Park," airing tonight at 7 p.m.

ESPN’s documentary tonight “The Hero of Goodall Park” will examine the case of four lives whose interactions more than 50 years apart changed each — and in some cases, caused their deaths. Above from left: four-year-old Carolee Ashby; Darlene Ashby McCann, Carolee’s sister; Douglas Parkhurst, who killed Carolee in 1968; the mugshot of Carol Sharrow, who killed Parkhurst in 2018.

50 years after killing Fulton 4-year-old, could a man’s last act atone for his crime?

FULTON — ESPN will premiere tonight an episode of its investigative program “E:60” focusing on the lives and deaths of Fulton natives Carolee Ashby and Douglas Parkhurst, whose paths intersected in 1968 and began a tragic story that would end only after five painful decades.

The worldwide leader in sports will air “The Hero of Goodall Park” at 7 p.m. and ESPN told The Palladium-Times over the weekend the program will include never-before-seen footage and interviews about one of the darkest incidents in the history of the city of Fulton.

Four- year-old Carolee Ashby was crossing state Route 481 — then known as the North South Arterial — at Division Street on Halloween, 1968 when she was struck and killed by a Buick truck. The driver wasn’t identified until 2013 when Fulton police announced then-63-year-old Douglas Parkhurst had taken responsibility for the accident. The statute of limitations long past expired, Parkhurst faced no criminal charges but shortly afterward relocated to the small town of Sanford, Maine. By all accounts he lived a modest, normal life until June 1, 2018, when Parkhurst was himself killed by a vehicle during a shocking rampage by a woman suffering an acute psychotic episode. The woman, Carol Sharrow, drove her car onto the Goodall Park baseball diamond during a youth baseball game, and Parkhurst suffered fatal injuries while attempting to stop her.

History with this many twists and turns requires a master storyteller, and ESPN enlisted award winning, internationally renowned journalist Tom Junod to handle the narrative. A 15,000 word piece by Junod chronicling the mystery of Carolee Ashby and Doug Parkhurst was also released this morning on ESPN.com. One of America’s most decorated authors, Junod is maybe best known for penning the Esquire magazine piece that would eventually become the film “A Beautiful Day in the Neighborhood” starring Tom Hanks as children’s television pioneer Fred Rogers.

ESPN provided The Palladium-Times with an advance screening copy of “The Hero of Goodall Park,” and it reveals stunning new details on the crimes of both Parkhurst and Sharrow in addition to examining the role of heroes in society.

“Heroes: we know one when we see one – or think we do,” says Junod over the opening montage. Carolee Ashby wears a dress (see related photo in gallery on Page 13) in a monochrome photograph, Parkhurst is pictured smiling with his family, the baseball field at Goodall Park appears with crisp foul lines and a manicured infield.

“That’s why we go to the ballpark. It’s simple there,” the monologue continues. “Guy strikes out in the first – villain. Same guy redeems himself with a walk-off homer in the ninth, he’s a hero. But what does heroism look like in life? What about the heroes themselves? Is heroism enough when the hero has a secret?”

Goodall Park has a storied history, according to Sanford historian Allen Mapes. Babe Ruth hit a home run there in 1919 that allegedly traveled 700 feet in one of his last at bats for the Red Sox before being traded. Small towns traffic in this type of mythology, but Goodall Park has a much different legacy now.

“Sports sometimes answers these questions, but sometimes you have to go deep into the past so deep you find yourself at a ballpark built more than 100 years ago,” Junod says. “A place where there’s a history of heroes to find out why one of them had to die."

On June 1, 2018, teams at Goodall Park were doing pre-game warmups around the infield when Carol Sharrow drove through the fence and onto the diamond. Dramatic video footage, some of which is being shown by ESPN publicy for the first time, shows Sharrow’s sedan careening around the base paths. A public address announcer urges players to “get off the field.” Players scatter.

“There wasn’t anyone there,” one of the players says of making eye contact with Sharrow.

Parkhurst, in the stands to watch his grandson play, then rushed to close the gate of the baseball diamond to contain Sharrow. She struck him and continued driving. Parkhurst, then 68, would die of his injuries en route to a local hospital.

Police arrested Sharrow a short time later, as it was “clear she was having a mental break,” according to an investigator. She was having an “extreme manic episode,” police say, due to her bipolar disorder. Footage of Sharrow during questioning by police shows extreme erratic behavior and language — at one point, she claims to be a Navy SEAL and later empties a large bottle of water on herself. She repeatedly claims on camera she doesn’t know why she is being held in custody.

“For a few hours, maybe even a day, Douglas Parkhurst was a hero,” Junod says in narration. “The story of the hero of Goodall Park was quickly replaced by another: the story of a man who hid a terrible secret.”

The program contains interviews with Parkhurst’s family, including his son and grandson, and with Carolee Ashby’s sister, Darlene Ashby McCann. Ashby McCann was holding Carolee’s hand when she was struck and killed in 1968. Fulton Police Department Investigators Michael Batstone and Stephen Lunn speak extensively in the documentary regarding the original investigation, and the 2012 tip that led them to Parkhurst. Parkhurst admits he was drinking alcohol the night he hit and killed Carolee Ashby.

Carol Sharrow was never tried for killing Doug Parkhurst. Originally charged with manslaughter, in May 2019 she was declared not criminally responsible due to mental illness. Tonight’s program also contains the first public interview with Carol Sharrow, now institutionalized indefinitely at an Augusta, Maine state psychiatric institution. She has struggled since the age of 18 with bipolar type-1, she says, speaking in a collected voice across a table from Junod.

“It’s like having a nightmare to wake up and find out it’s true,” Sharrow says.

Reached Sunday evening via social media, Junod told The Palladium-Times the story was unlike anything he’d done on his long and illustrious literary resume. At two years from start to finish, it’s also one of his longest projects.

“The story has never been anything less than amazing to me,” Junod said. “It became more amazing as I got to know the people who lived through it.”

In a radio interview last week during an appearance on ESPN’s “Dan LeBatard Show with Stugotz,” Junod reflected on the big picture of the story, as well as the individuals involved.

“The cosmic wheel seems to turn. Out of 200 people at Goodall Field that day, she hits and kills Doug Parkhurst,” Junod told the Miami-based show’s hosts. “With Fred Rogers, I found a spirituality through kindness, but in this story the universe is a little bit harsher and more judgemental. People talk a lot about karma and poetic justice... this story’s got it all right there.”

“The Hero of Goodall Park” airs tonight, Tuesday July 7, at 7 p.m. on ESPN. Tom Junod is a guest today on the ESPN Daily Podcast with Mina Kimes to discuss the story and will appear on SportsCenter in the “OTL on SC” segment in the noon ET edition, ESPN officials said. The program will also air this Sunday, July 12 at 4 p.m. on ABC.

Fulton Mayor Deana Michaels did not respond to multiple requests for comment for this story.