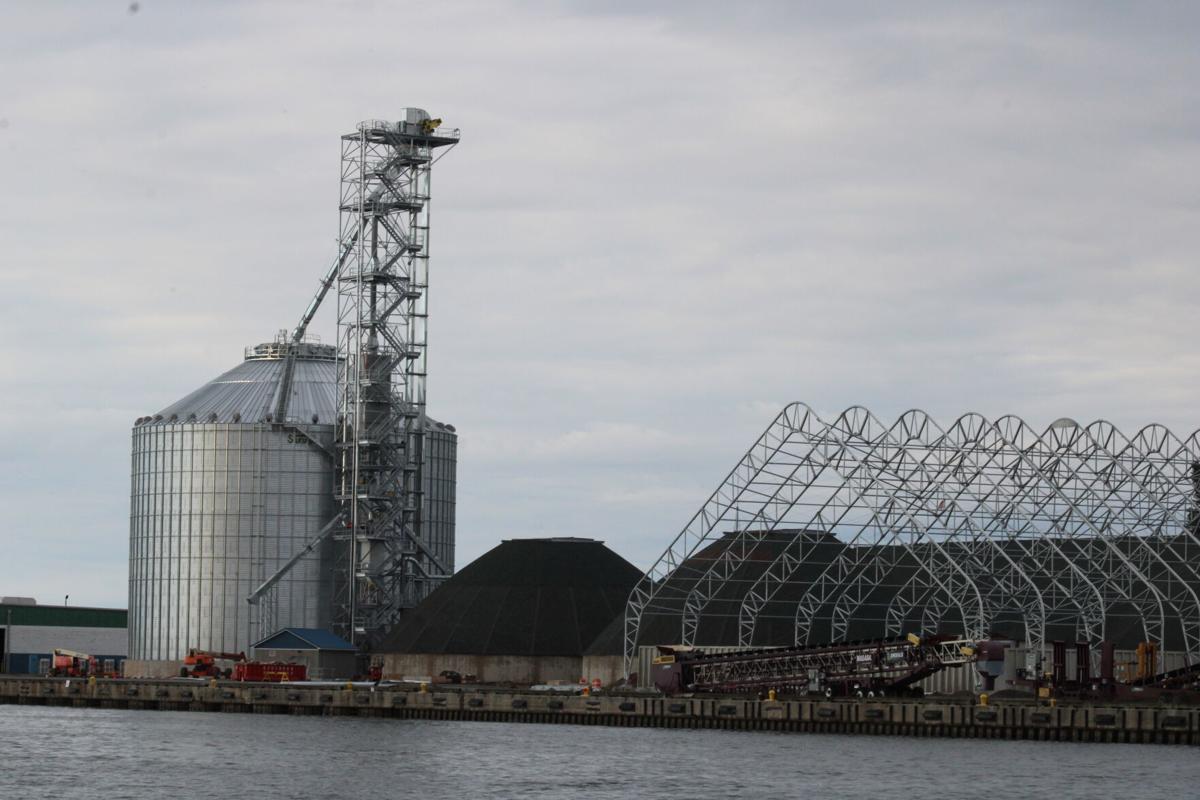 A state Supreme Court ruling on Friday ordered a construction stoppage on an under construction, Port of Oswego Authority storage facility, the frame of which is pictured above to the right. The city of Oswego and the Port Authority have been at odds and entangled in a lawsuit over the building, which is larger than initially proposed and blocks views of the West Pierhead Lighthouse and Lake Ontario from portions of the east side of the Oswego River. The Port Authority was ordered to redo an environmental assessment, which was previously completed under the assumption of a smaller storage building, before moving any further with construction of the building. The Port is able to continue with the balance of the multimillion dollar overhaul at the shipping hub, which includes a large silo structure and grain elevator, pictured above to the left. The judge also ruled Friday the Port is not subject to city site plan and zoning laws. 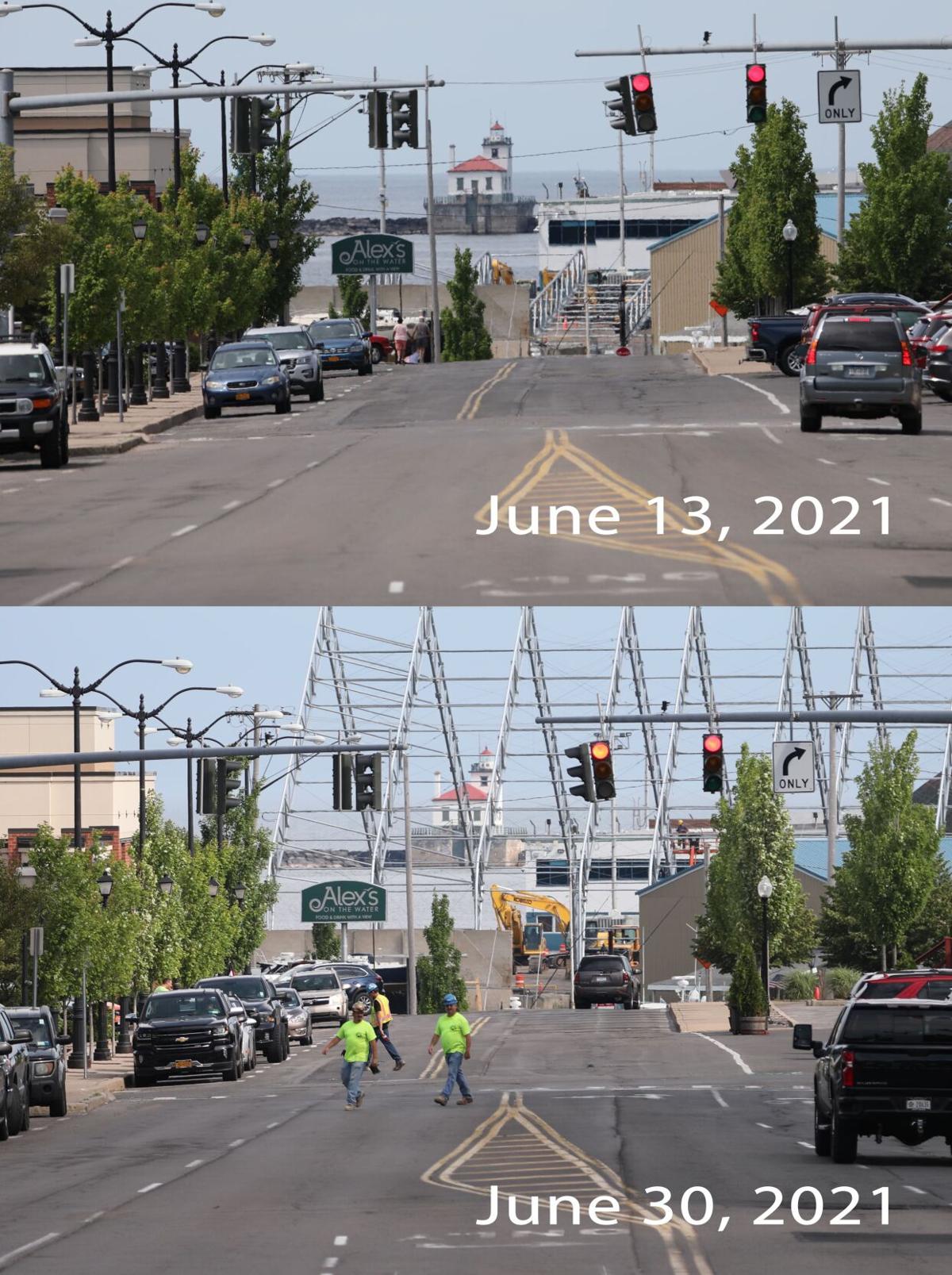 The city filed a lawsuit against the Port of Oswego Authority after a larger than anticipated structure blocked views of the historic West Pierhead Lighthouse earlier this year from East First Street and other viewpoints. State Supreme Court Judge Gregory Gilbert on Friday said the Port altered the size and shape of the building without revisiting the potential environmental impact as required under state law. Construction on the building is halted as the Port reviews the environmental impact.

City site plan and zoning laws do not apply to Port, according to the state court ruling

The city of Oswego and the Port of Oswego Authority (POA) have been locked in a bitter dispute since late June regarding the construction of a steel-frame structure that blocks views of the iconic West Pierhead Lighthouse and Lake Ontario from portions of the east side of the Oswego River. City officials previously asked for, and were granted, a temporary restraining order, which was extended Friday as part of a series of decisions from State Supreme Court Justice Gregory Gilbert.

The city filed an Article 78 proceeding — a legal process used to appeal the decisions of state and local agencies — in July that claimed the Port’s design for a grain storage facility, known as Dome 4, was materially altered in both size and shape after the Port board’s approval of a negative declaration under the State Environmental Quality Review Act (SEQRA).

A negative declaration, such as the Port's, is essentially a claim the project would have no significant environmental impacts.

Port City officials and their attorneys have argued the Port’s planning and approval lacked transparency and POA officials failed to properly navigate the approval process, specifically by building a larger structure than was approved by the public authority. POA filed a response asking for dismissal and argued the legal challenge came too late and the city failed to prove a violation occurred.

City officials, among other claims, argued the Port’s environmental review was completed under the assumption of a smaller, less invasive structure. In a court filing, the city said the larger building under construction “completely obliterated” views of the historic lighthouse and Lake Ontario.

The Port has contended there is no substantive difference in the environmental impact between the smaller and larger structure.

Gilbert, in Friday’s ruling, said “the court is not in favor of allowing SEQRA to be sidestepped,” and noted the Port’s argument there is no difference in the environmental impact of the initially proposed 55-foot-tall structure and the 70-foot high building under construction “has no merit.”

“The Port was required to amend or rescind the negative declaration once the design of Dome 4 was substantially changed,” Gilbert wrote in his decision, adding “the failure to complete SEQRA review of the square grain storage structure was arbitrary and capricious.”

In court filings, POA officials claimed the larger, square building was approved in December 2020 when a construction bid was accepted. Gilbert pointed out the December acceptance came more than two months after the SEQRA review was completed with the POA board determining the project would have no significant adverse environmental impacts.

No SEQRA review of the larger building ever took place, Gilbert said in his decision. Gilbert said “there is no mention by email, agenda or minutes of a square grain storage structure” between the November SEQRA determination and the December acceptance of the construction contract.

Port documents do not state what was to be built, according to Gilbert, and there is no evidence indicating the Port revisited the environmental review.

In addition to annulling and rescinding the Port’s approvals of the large storage building, Gilbert ruled that further construction of the building be halted until the POA board completes the full SEQRA process.

Oswego Mayor Billy Barlow, who has vocally and publicly criticized the Port over the matter, said the city “has been vindicated by this ruling.”

“The clear, open, transparent and public process for approving this project was not followed by the Port and the court’s recognition of the concerns and objections raised by the city is a clear ruling in favor of open government,” Barlow said.

City Attorney Kevin Caraccioli, who raised the issue of the project's impact on the viewshed with the Port as early as November 2020, called Gilbert's ruling "satisfying" and said the decision stopped a "clear overreach of public authority." Caraccioli commended the city's legal team, which included outside assistance from Syracuse-based Hancock Estabrook, for developing "a strong case in defense of the city of Oswego, its residents, businesses and guests who identify the significance of the lighthouse."

Scriber said the Port would undertake the environmental review of the storage facility portion of the project and “then proceed accordingly.” Scriber claimed the court’s decision “otherwise confirms all the Port’s actions” and pointed out the decision verified that the Port is not bound by city law.

"We are pleased that the court confirmed the Port's autonomy as a New York state entity and is not bound by city laws or ordinances," Scriber said. “The project the city’s lawsuit sought to dismantle is a vital component of our long-term, competitive ability and survival.”