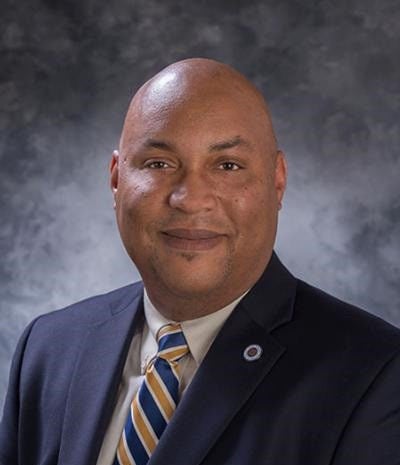 Dr. Mathis Calvin III, seen above, is poised to become the new superintendent of the Oswego City School District. 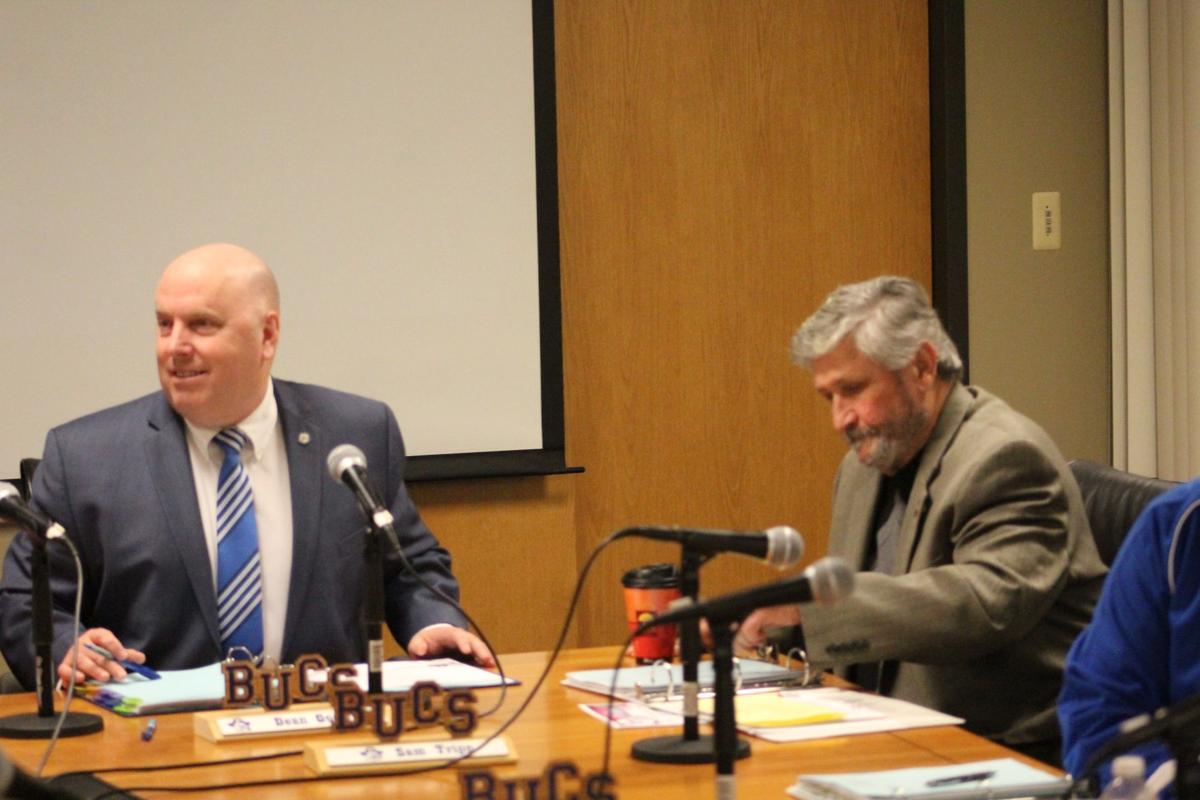 Oswego Superintendent Dr. Dean Goewey is pictured above left with Board of Education member Samuel Tripp.

Dr. Mathis Calvin III, seen above, is poised to become the new superintendent of the Oswego City School District.

Oswego Superintendent Dr. Dean Goewey is pictured above left with Board of Education member Samuel Tripp.

OSWEGO — The Oswego City School District Board of Education is set to approve Dr. Mathis Calvin III as its new superintendent at Wednesday’s board meeting.

According to multiple district officials, Calvin’s hiring should be a pro forma vote after a search process sparked when current Superintendent Dr. Dean Goewey in January announced he would retire from the district this July. The board is scheduled to meet virtually at 5 p.m.

“Dr. Calvin’s skill set is an ideal match for the challenges this district faces,” Board of Education President Heather DelConte told The Palladium-Times on Monday. “He is collaborative in nature, focused on student achievement and has a portfolio of professional successes already to his credit.”

Calvin, 47, is a Rochester native who previously served stints as superintendent with the Wayne and Stockbridge Valley, New York, central school districts as well as three years heading up the state School for the Blind in Batavia. He holds degrees from Keuka College and St. John Fisher College, as well as a doctorate in educational leadership from the University of Rochester.

In an interview Sunday with The Palladium-Times, Calvin made his case as the right man for the job and said he looks forward to embracing the challenges and opportunities that come with serving as top Buccaneer.

“This is a strong community that really cares about its kids, that wants to do a great job with and for its students,” Calvin said. “There’s great staff that work in every part of the district, and the district is making gains in a number of important areas.  I would love to become a part of Oswego and help, support and lead.”

The origins of his passion for education reach far back into his upbringing: Calvin recalls from an early age knowing he wanted to enter the field, and by the time he graduated from the Rochester City School District was already well on his way thanks to a number of formative experiences including high school and college field experiences with students and in classrooms. While school administrators must function as jacks-of-all-trades, Calvin’s original specialty was in special education and says that background fits like a glove with Port City schools.

“It was great to break down and modify curriculum, especially for students with disabilities so they can participate in the curriculum to the fullest,” he said. “The district believes in graduating all students fully prepared and life ready — that really coordinates to my belief system.”

After a decade in the special education field, Calvin decided it was time to take a step up to an administrative role. He spent time as a teacher and academy director at a charter school in Rochester and served for five years as the director of pupil personnel at the Letchworth (Livingston County) Central School District while completing his Ph.D.

Asked about specific goals for his first year, Calvin said he’ll focus on both meaningful statistics and orienting himself to the district’s populations in need of support.

“I’d like to see the district go from its roughly 80 percent graduation rate up to 90, 95 percent,” he said. “We’ll look at two groups in particular — students of color and students with disabilities. Regardless of background, we want our kids doing really well and fully supported so they can truly access the educational curriculum and excel.”

One of the most important responsibilities that falls to a district superintendent is the crafting of each school year’s budget. Superintendents propose a budget, present it to their board members then work through how to make the ends meet. The proposed 2020-2021 district budget is roughly $88.5 million, up from $86 million last year. Today is the final day for voting in the entirely by-mail budget referendum, and officials should know within hours whether or not it has passed or failed. Oswego voters have not rejected a budget in more than a decade, an encouraging sign for administrators and a streak Calvin wants to augment with his own record — he’s never had a budget defeated during his time as a superintendent.

Calvin said as part of being a “transparent leader,” it’s crucial to find the right balance between student programming and a budget that’s “fiscally sound.”

“Your budget needs to be foolproof,” he said, citing an incident at Wayne Central when a lightning strike took down an expensive heating system. “In my 10 years as a superintendent, I know unexpected things are going to happen. A budget needs to be situated so if something goes wrong, you have to be able to take care of your needs.”

The Oswego City School District and Exelon Generation, owner of the James A. FitzPatrick and Nine Mile Point nuclear plants, regularly negotiate a multi-million payment in lieu of taxes (PILOT) agreement to provide stability to the district’s revenue forecasts. Exelon also owns the Robert E. Ginna Nuclear Power Plant in Ontario, Wayne County — tax dollars from which fund the Wayne Central School District. Calvin’s previous experience in PILOT negotiations, he said, makes him uniquely qualified to add a depth of knowledge when dealing with one of the major district income stream.

“We negotiated a very successful new PILOT at a time when we were dealing with revenue going down quite a bit,” he said. “We worked collaboratively with (Exelon Generation) to secure the district’s financial footing to the greatest extent. We also put in place some large-scale efficiencies and brought the district back to a sound fiscal standing.”

When the Board of Education convenes Wednesday via teleconference, the circumstances of the meeting speak to a seismic shift in public education across the state and nation. New York public schools have been closed to in-person instruction since March and on May 1, Gov. Andrew Cuomo announced the effective end of classes inside school buildings. Public education is facing a crisis not seen in decades, according to all experts and officials, and one that may have long-lasting impact for years to come. Calvin said he wants to assure Oswego parents the top priority is ensuring the health and safety of students, coupled with adapting to ever-changing mandates and guidelines from state and local authorities.

“There are times in education when we go through periods of uncertainty, but I want to make sure people understand: we’ll have all the resources in place (in the fall) for our students and staff and make sure we have the very best educational programs for our students,” Calvin said. “There will be new information coming as we move forward, and we’ll share it very openly, honestly and transparently.”

Calvin and his wife of 25 years are the parents of three children, two out of college and one still in high school.

As of Monday afternoon, district officials said the finalized terms and conditions of Mathis’ contract were not yet available.

Goewey earlier this year announced his intention to retire after spending nearly his entire career in his hometown district. He began in Oswego schools as a kindergarten student at Frederick Leighton Elementary in 1967 and eventually rose to the district’s top administrative position. Along the way he served the district as a reading teacher, elementary school principal and assistant superintendent before assuming the big job in October 2015.

“My 36 years in education have been focused on the central theme of working and advocating for the less able, underrepresented and struggling students,” Goewey told The Palladium-Times Monday. “As the superintendent, I have always treated every employee with the same level of respect regardless of their position.”

DelConte said the district was bidding farewell to one of its educational giants.

“I am so appreciative of Dr. Goewey’s leadership over the last several years,” she said. “He has contributed in so many meaningful ways, and we will miss his talented guidance.”

Some of the highlights of Goewey’s tenure including balancing a $5 million budget deficit in 2016, selling the district’s former education center on East First Street and re-purposing a wing of Leighton for administrators and bringing a “spirit of inclusiveness.”

“My greatest accomplishment though has been working collaboratively with all staff and students.  The staff of the OCSD is second to none.  Teachers, support staff and administration have always been eager to promote the district’s mission and vision and I am very grateful for the opportunity to work with them.  My family has a rich history in this district and I care deeply about the future of the OCSD and wish them the very best.”