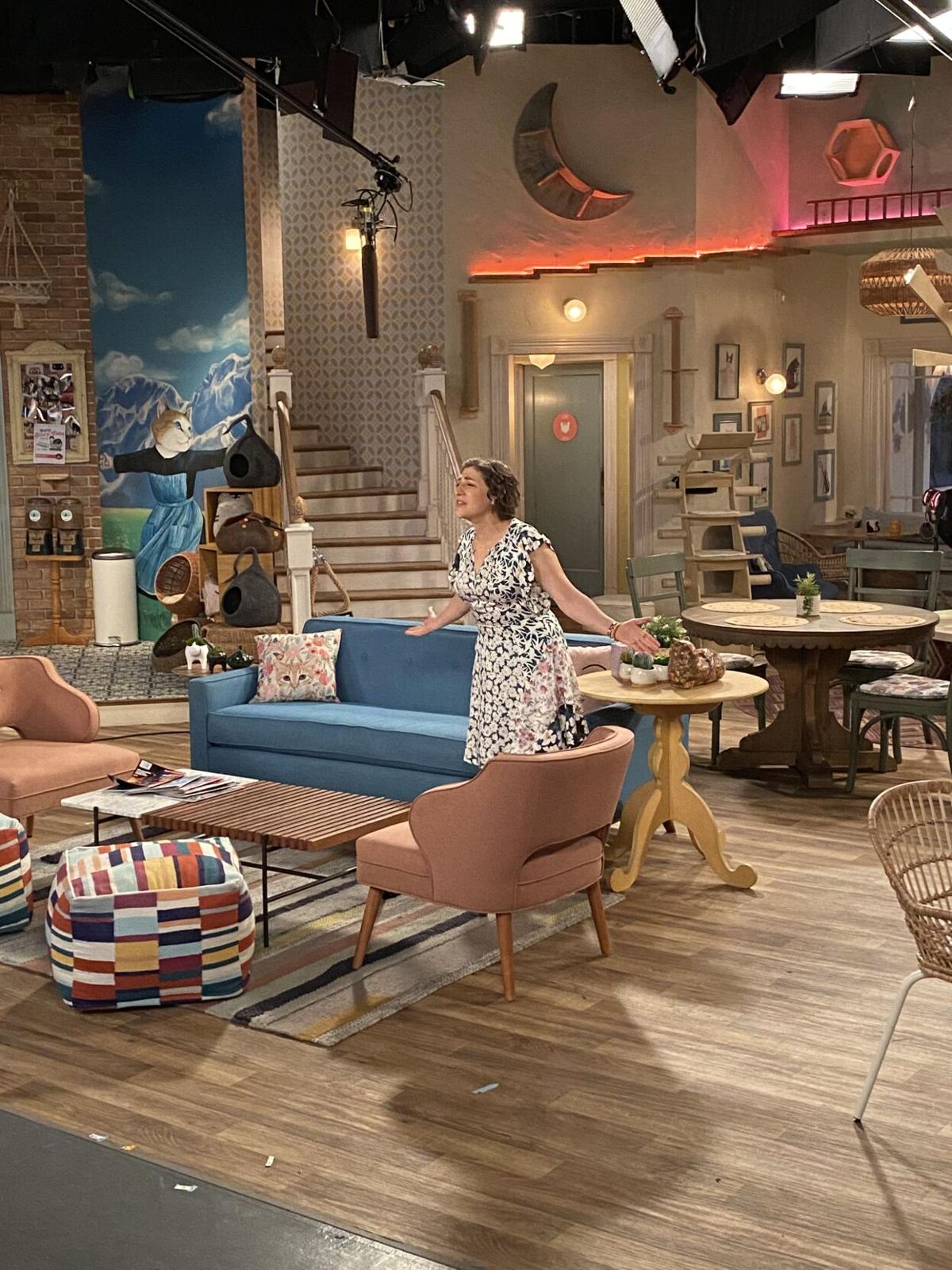 In this photo provided exclusively to The Palladium-Times, actress Mayim Bialik reherses on the set of her new show ‘Call Me Kat’ set to debut Jan. 3 on FOX following NFL football. 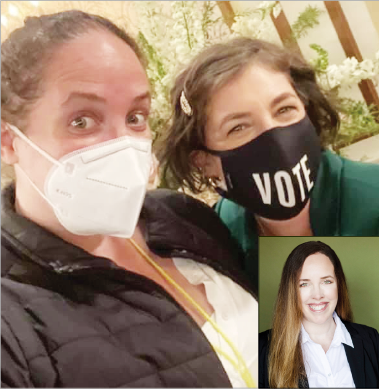 Oswego native Mackenzie Gabriel-Vaught (also inset) and Mayim Bialik take a selfie between shooting scenes for the duo’s first original series. Gabriel, who serves as Bialik’s director of programming, and the former ‘Blossom’ star struck out together to found Sad Clown Productions after the end of their previous project, CBS’ ‘The Big Bang Theory.’

In this photo provided exclusively to The Palladium-Times, actress Mayim Bialik reherses on the set of her new show ‘Call Me Kat’ set to debut Jan. 3 on FOX following NFL football.

Oswego native Mackenzie Gabriel-Vaught (also inset) and Mayim Bialik take a selfie between shooting scenes for the duo’s first original series. Gabriel, who serves as Bialik’s director of programming, and the former ‘Blossom’ star struck out together to found Sad Clown Productions after the end of their previous project, CBS’ ‘The Big Bang Theory.’

LOS ANGELES, Calif. — ‘Call Me Kat,’ a new comedy on FOX produced by Oswego native Mackenzie Gabriel-Vaught in her first script-to-screen product as head of development and production for Hollywood’s Sad Clown Productions, will premiere to a nationwide audience tomorrow, Sunday, Jan. 3.

Slated to begin after the conclusion of FOX’s National Football League programming, ‘Call Me Kat’ is the initial collaboration between Gabriel-Vaught and Sad Clown President Mayim Bialik, who serves as lead actor and executive producer on the series. The two worked for a decade together on the wildly popular CBS sitcom ‘The Big Bang Theory’ before founding their own shop in 2019, and the 2000 Oswego High School graduate describes the show, based around single 39-year-old Kat Silver (Bialik) who switches career and opens a “cat café” coffee shop, as a funny and heartfelt subversion of some typical television tropes.

“It’s a concept that hasn’t shown up much, or ever, on a network sitcom — (Kat) is the kind of woman for who having a family didn’t work out and she’s OK with that,” Gabriel-Vaught this week told The Palladium-Times. “She’s not a sad cat lady — she’s a rad cat lady!”

While the COVID-19 pandemic slowed production and forced the entire television and film industry into a new reality of time-consuming and expensive coronavirus protocols, Sad Clown was able to not only sell ‘Call Me Kat,’ but prompted a four-network bidding war over the rights. FOX’s offer to make 13 episodes, to air in a regular 9 p.m. Thursday timeslot, won out and Gabriel-Vaught went to work doing what made her one of LA’s rising stars: assembling the right cast and crew to fit their vision.

Working from home as so many have for the past year, she was able to “hone in on casting and selecting our crew, the directors and writing staff.”

“We didn’t have to rush anything,” she said, describing both the immediate demand for the show among networks and the COVID-related production delays. “It gave us a much-needed breather (after selling the show) to really get it right.”

Approaching topics like modern dating for people who grew up in the internet age, and the cultural mélange of Kat's Cat Café’s staff and patrons, is giving the Sad Clown team a chance to explore “life as a single woman who has what she needs, and is happy where she is.”

If you ask Bialik — whose polymath career has seen turns as an award-winning actor, neuroscience PhD, author and now executive producer and studio head — about working on ‘Call Me Kat,’ she’ll say fondly it was originally a project brought to her by ‘Big Bang Theory’ co-star Jim Parsons, and praise the aggressive promotional support from FOX during the country’s most widely watched football coverage.

“We all need a little fun, and this is a goofy, weird character, with friends who enjoy her quirks and have some of their own,” Bialik said, reached this week by phone.

But ask about Mackenzie Gabriel, and you get Bialik unfiltered, accompanied by a non-furtive tone shift describing her “fierce, confident and cool” colleague — a “woman of high principle who never misses a beat.”

“I adore her and everything that region of the country did to produce her,” Bialik told The Palladium-Times. “She’s so funny, she gets a great read on people, and she’s optimistic — I’m not — so we balance, and we’re both learning and growing and teaching.”

When ‘The Big Bang Theory’ came to an end in 2019 and Bialik moved on from portraying scientist Amy Farrah Fowler, the star didn’t yet have designs on founding her own production company but she “knew I liked (Gabriel-Vaught’s) personality and was really hoping I could continue working with her.”

As what Bialik calls the “right hand” of iconic television producer Chuck Lorre (‘Big Bang Theory,’ ‘Two and a Half Men,’ ‘Mike and Molly,’ and ‘Young Sheldon,’ among many others), Gabriel-Vaught worked exclusively behind the scenes and made an impression on her camera-facing co-workers.

“So I kept tabs on her,” Bialik said. “I’d check in like, ‘oh how’s the job search?’ and when we finally closed the deal (for production backing from Warner Brothers), the next thing I asked was to bring on Mackenzie as our head of development.”

The two women, along with one other employee, became Sad Clown Productions, and the race was on to complete the “enormous” task of forging a television company from the ground up. Out came the white boards, bulletin boards, schedules and calendars.

“I literally could not do this without her,” Bialik said. “She’s what makes this run — we’re not curing cancer, but things (in television) can be tense, and she has such an ability to keep calm.”

Cranking up the idea engine for their “mighty three-person company,” according to Bialik, is a natural process and both hope the content coming out of Sad Clown’s workshops and studios “speak to the sensibilities” of modern women.

“We wanted to focus on characters that are often the friend, or not the lead role. (Kat) is a real woman — I don’t wear Spanx, I don’t have hair extensions, I don’t dye my gray hairs and I’ve never had plastic surgery,” Bialik said with a chuckle. “It’s very important that we highlight unusual and quirky women in a way that’s endearing and compelling.”

“Mackenzie isn’t from a Hollywood family where she got handed a job — she worked her butt off to get here and you can see how much she wants to give back to young women in our industry,” she added.

The Gabriel family, lifelong natives of East Fourth Street, imparted on their daughter the memories and lessons during “happy days in Fruit Valley” that now drive her own parenting (Mackenzie and husband Nicholas Vaught welcomed their son in November 2018) and professional vision.

Bialik and Gabriel-Vaught are business partners and while both acknowledge the need to preserve that relationship, when patriarch John “Big Gabe” Gabriel passed away in May 2020 the heartbreak was felt from New York to California.

“She’s like our mom,” Bialik said of one of Gabriel-Vaught’s many on-set and in-office roles. “When mom’s hurting, everybody hurts.”

“When I took this position, (Bialik) knew I was a mom with a young child, but that didn’t deter her because she understands the importance of balance and family,” Gabriel-Vaught said. “It’s been such a huge gift to be home and have extra time we wouldn’t have otherwise had to watch (my son) learn and grow. I look at him and see my dad.”

Now that they’ve successfully pitched and sold their first tangible product, Bialik and Gabriel-Vaught are keeping one eye on the ball while looking hungrily toward the future.

“One of the things I really miss is being in the office with her,” Bialik said. “We enjoy what we do and have really open communication — that’s how everyone deserves to work.”

“Call Me Kat” premieres on FOX after NFL football on Sunday, Jan. 3.