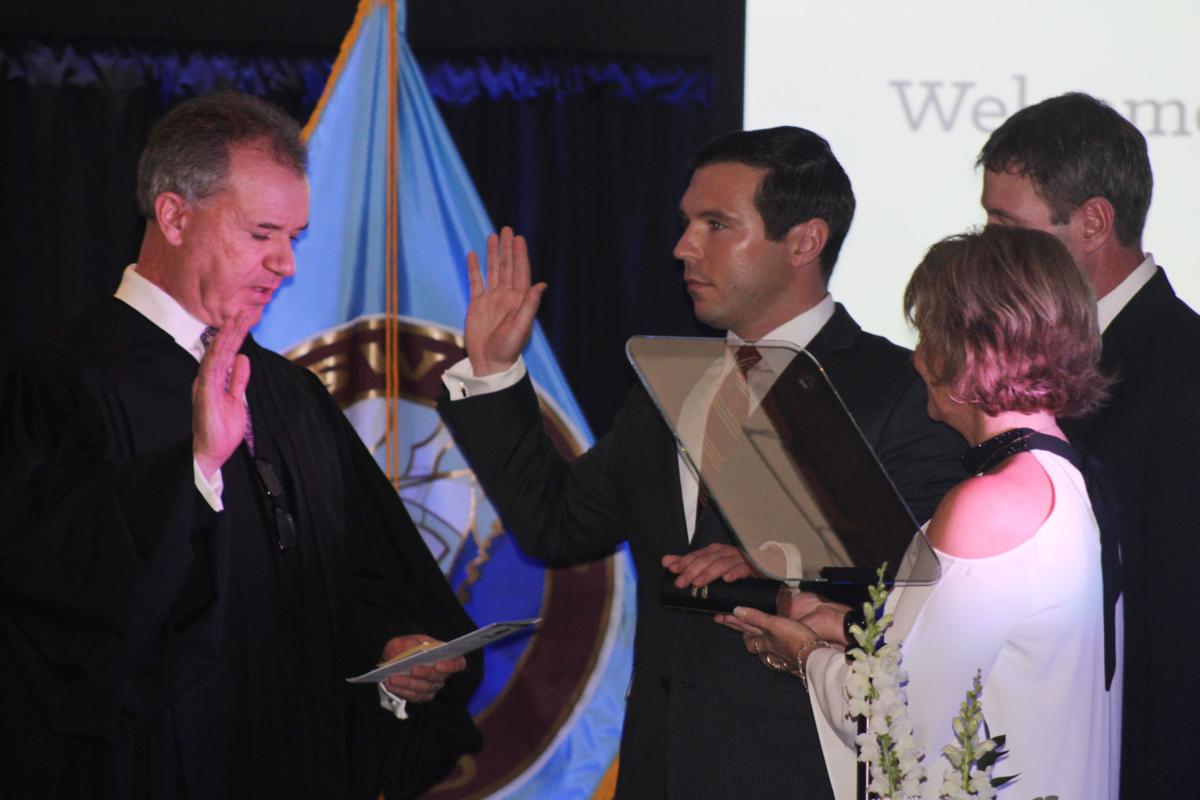 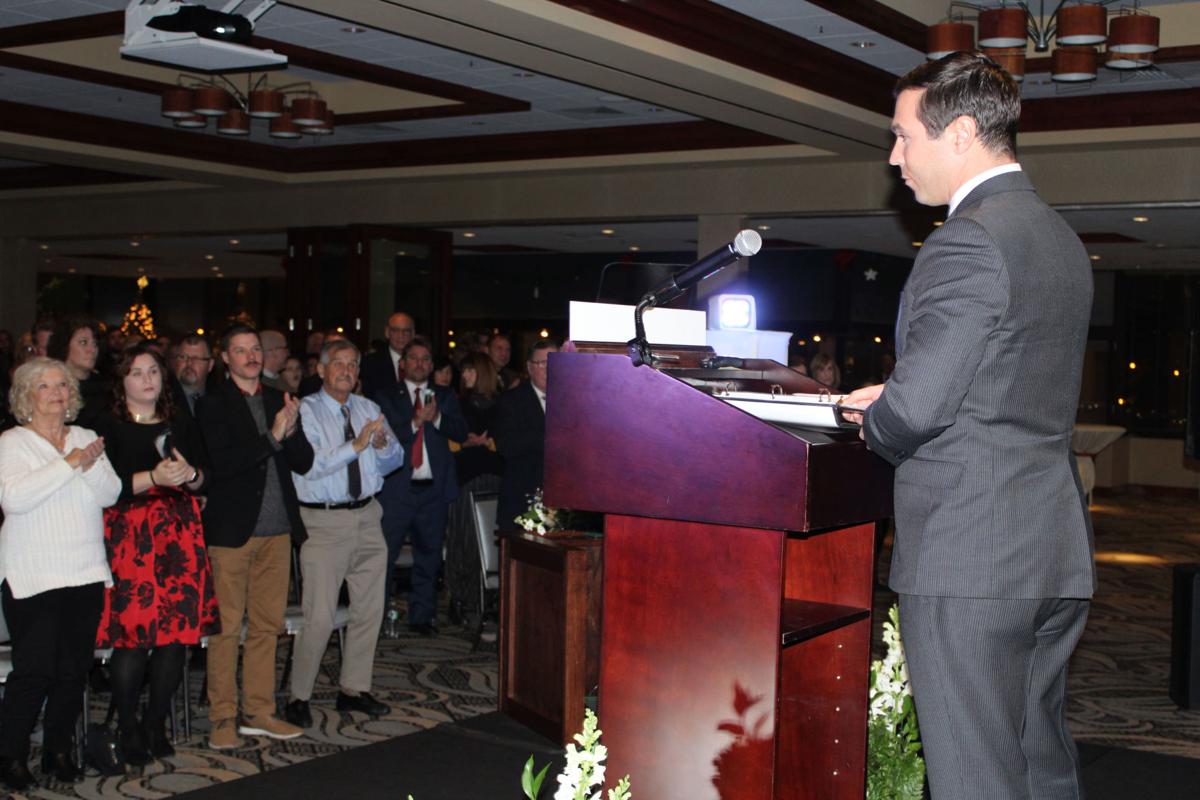 Oswego Mayor Billy Barlow greets a standing-room only crowd Wednesday at the Lake Ontario Event and Conference Center after being sworn-in for his second term. 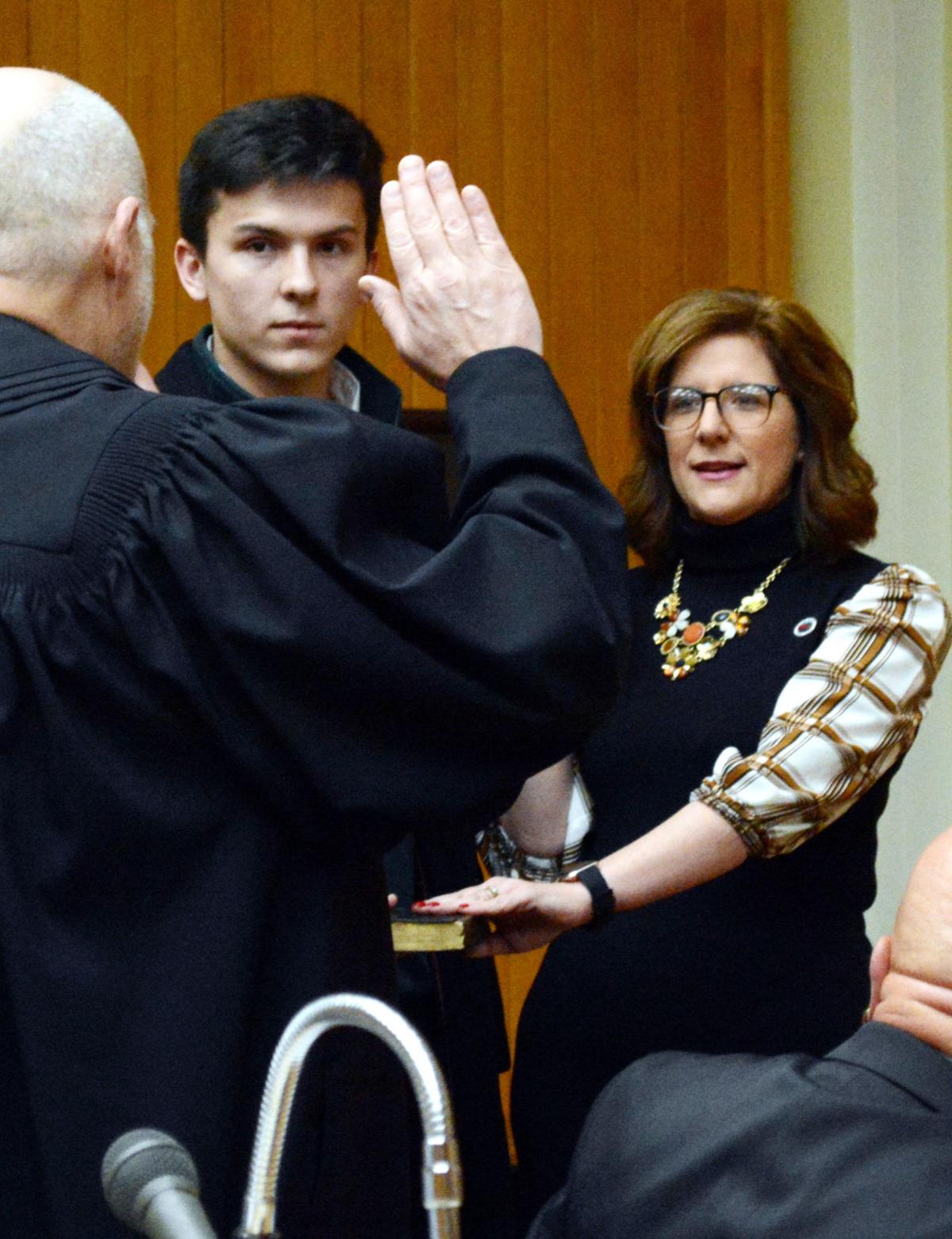 Oswego Mayor Billy Barlow greets a standing-room only crowd Wednesday at the Lake Ontario Event and Conference Center after being sworn-in for his second term.

OSWEGO — The cities of Oswego and Fulton welcomed their mayors and city councilors in optimistic inauguration ceremonies Wednesday, with Mayors Billy Barlow and Deana Michaels saying the best days are ahead for their municipalities.

Republicans both, Barlow (Oswego) and Michaels (Fulton) were elected with convincing majorities in November’s election — Barlow ran unopposed and Michaels distanced herself in a four-way race. Both will serve four-year terms.

Barlow, 29, was first elected in 2015 as New York’s youngest mayor. This will be his second and final term, due to city term limits. Michaels, an executive and Fulton branch manager at Pathfinder Bank, began her first run for political office just one year ago and now will take over Fulton city hall from retiring mayor Ron Woodward Sr. (See related story below)

Common councilors were individually administered their oaths of office, followed by Barlow, who struck a cheerful but decisive tone when discussing the city’s future.

Five of the seven councilors were re-elected in November, and will be joined by newcomer Shawn Burridge, R-2nd Ward, and veteran Shawn Walker, R-4th Ward, who returns to the council following a two-year hiatus.

Introduced by longtime friend and the evening’s master of ceremonies James Cloonan, who also serves as the county commissioner of jurors, Barlow took the stage to a standing ovation — one of three he received on the night — and reflected on his first four years in office, which he said could be called “the most productive four years” in the history of city government.

“We’ve come a long way in a short period of time to be sure,” the mayor said.

The city’s “recent renaissance,” Barlow said, is not only attributable to city government, but to the cooperation and hard work of residents, as well as the many public-private partnerships and non-profit organizations that aim to improve Oswego.

With all the tangible achievements of the past four years, Barlow said he’s most proud of “restoring the faith, the confidence and the trust Oswego residents have in their local government.”  Barlow thanked the city council, past and present, for their support and partnership over the last four years.

Barlow from the podium enumerated a lengthy list of accomplishments in his first-term: a revamped code enforcement department and waterfront, securing more than $40 million in grant funding, investments in infrastructure and public spaces, reductions in city overtime and the city’s first tax cut in decades. The real work, he said, is what lies ahead for the city.

“We’re just getting started,” Barlow said. “There’s more to do and there’s more to come. I’m not naïve to the magnitude of our remaining challenges, so by no means are we declaring victory yet.”

Among those challenges are hardening the shoreline against rising Lake Ontario water levels, battling crime and drugs in the community, fixing aging infrastructure and confronting poverty, Barlow said, vowing “to waste no time tackling these new and remaining challenges.” Barlow called on “the entire Oswego community to work together and build on the momentum” gained in recent years.

“It’s all of our duty to make sure that this fundamental change in direction is permanent and not just a temporary spike on a timeline of a prolonged, steady decline,” Barlow said. “I can’t guarantee we won’t have setbacks along the way, but I am confident that much of our heaviest lifting is behind us and some of our best days are ahead of us.”

The new Oswego Common Council will meet for the first time Monday evening at city hall.

In Fulton, the pervasive theme of the inaugural meeting Wednesday afternoon was moving the city forward.

“There is a great new energy and feeling of optimism that fills the air in Fulton,” Michaels said during prepared remarks to an overflowing crowd at the Fulton Municipal Building. “With initiatives such as the Downtown Revitalization Initiative (DRI) funding, the Fulton Block Builders, Friends of Fulton Parks and Fulton Footpaths to name a few, I know that we’re that much closer to seeing our city once again being a city of opportunity and hope.”

“I’m excited for this day to finally come, and I’m looking forward to pushing this city forward,” Chapman said. “I think we can all work together. Parties aren’t going to play into it. We’re going to move ahead and keep going.”

City officials have been having regular meetings about how to use the $10 million in funding provided by the DRI and awarded to the city in August as part of Gov. Andrew Cuomo’s upstate economic development push. For Michaels, that takes priority.

“First and foremost, the DRI demands our attention because there’s a strict timeline there that we have to follow, so we need to make sure we’re adhering to that,” Michaels said. “There’s going to be a lot of great things that come out of that.”

Macner, who was voted council president, also listed Fulton Block Builders, Friends of Fulton Parks and Fulton Footpaths as positive projects for the city. Block Builders provides reimbursement for certain house or property projects in the city, Friends of Fulton Parks works with the recreation department to improve parks and Fulton Footpaths is developing walking trails along the Oswego River and Lake Neatahwanta.

“I moved here in 1981 — I am a transplant — and everybody was working back then. Fulton was a very industrial community, but then you could see everything leaving — the businesses and industries — but it’s making a slow comeback,” Macner said. “It’s baby steps. I tell people that it’s not going to happen overnight. It takes time. Be patient and work with the city. If you’ve got ideas, bring them forth. We’re trying to move forward with what we’ve got to work with.”

The council also voted to approve several appointments. Among them: Jodi Corsoniti as the registrar of vital statistics; Karen Perwitz and James Myers to the Fulton Planning Commission; Alan France, Josephine Farrell and Jhoram Dilk to the Fulton Ethics Committee; Lynn Kistner and Marissa Hanlon to the Zoning Board of Appeals; and Craig Raponi, Joseph Arigo and Kenneth Niccoli to the Plumbing/HVAC Board.