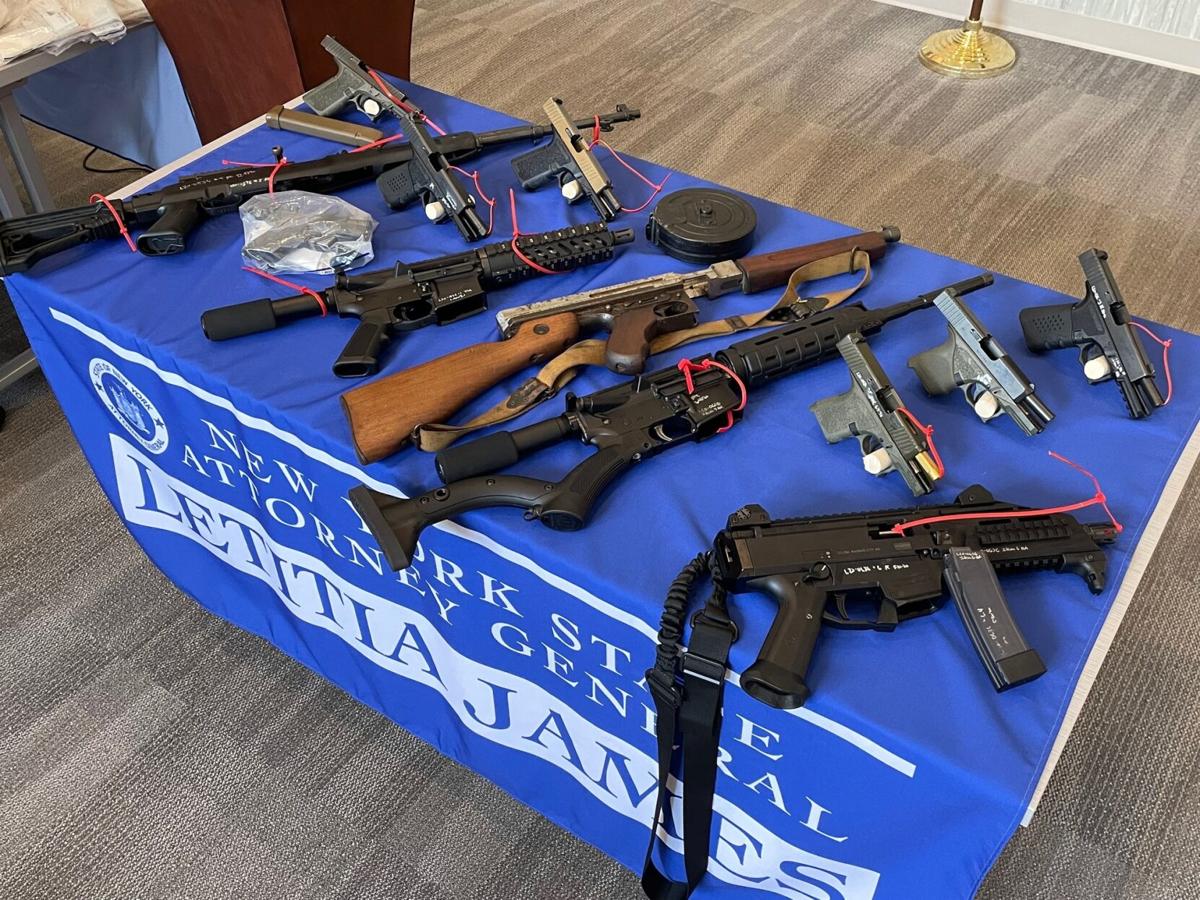 Above, some of the firearms seized by law enforcement officials as part of "Operation Raw Materials." Attorney General Letitia James this week announced nearly 80 people, including eight Oswego County men, were charged in the major drug bust. 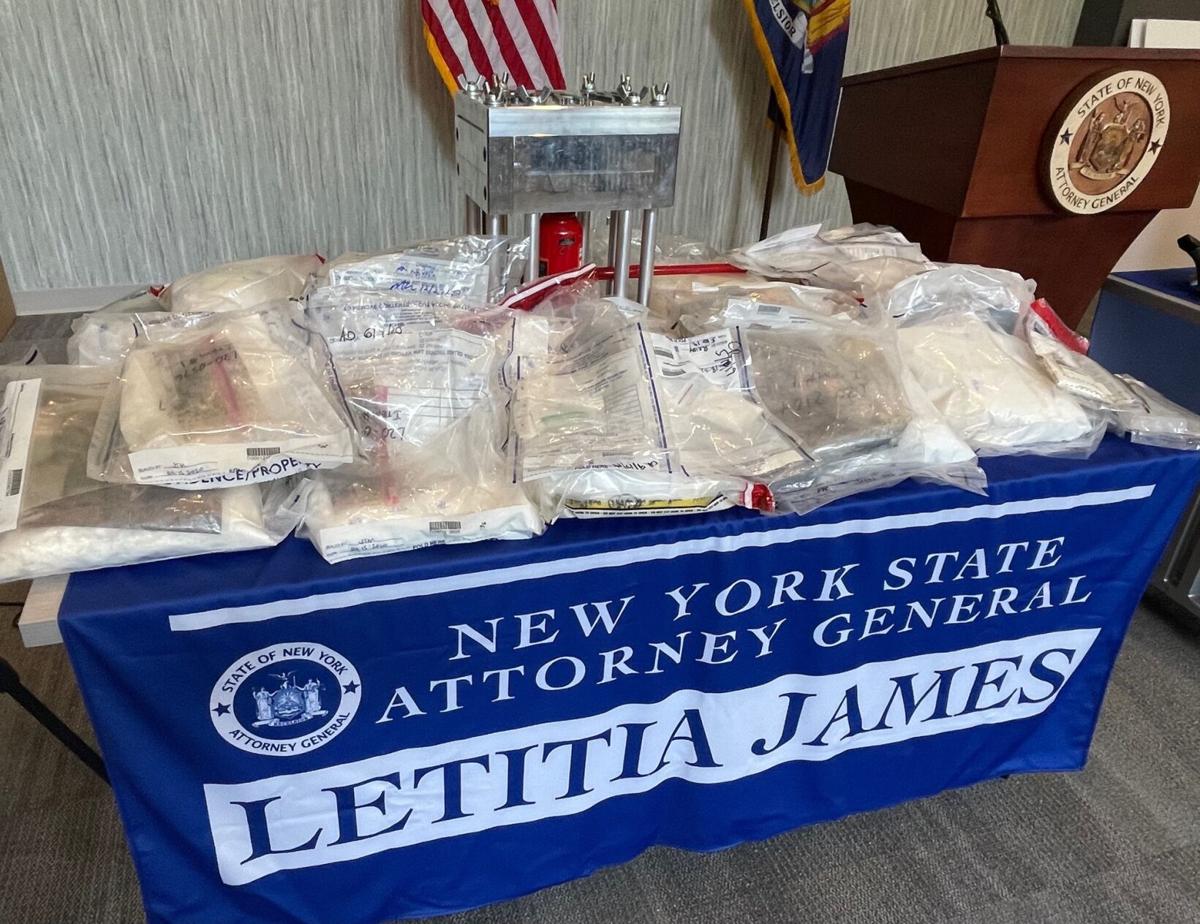 Above, some of the firearms seized by law enforcement officials as part of "Operation Raw Materials." Attorney General Letitia James this week announced nearly 80 people, including eight Oswego County men, were charged in the major drug bust.

Defendants face charges that include operating as a major trafficker and criminal sale and criminal possession of a controlled substance. Authorities also seized 32 kilograms of cocaine, 117 grams of heroin mixed with fentanyl, more than $490,000 and 15 firearms, according to indictments unsealed in Onondaga County Court.

One of the rings sold drugs in the central New York counties of Onondaga, Madison and Oswego and the second operated in Onondaga, Oswego, Oneida, Cortland and Westchester counties as well as New York City, according to James.

The multi-agency investigation — dubbed “Operation Raw Materials” — brought together the resources of more than a dozen local, state, and federal enforcement agencies. The investigation included covert physical surveillance, thousands of hours of electronic surveillance, and multiple search warrants — all aimed at rooting out cocaine dealers operating throughout New York and elsewhere.

"Cracking down on illegal drug trafficking and violent crime has been a priority for our office since day one," James said in a prepared release.

The AG's Organized Crime Task Force conducted the investigation with the Oneida/Madison County Drug Task Force and worked with other law enforcement agencies.

The first indictment outlines the activity of the “Pupello Group” — which was allegedly led by Michael Pupello, and charges 25 individuals with 123 counts for their roles in selling narcotics in Onondaga, Madison, and Oswego counties. Pupello reportedly employed a vast network of individuals who bought and sold primarily cocaine in the region.

Officials said the defendants frequently used “coded and cryptic terminology” in an attempt to disguise their illicit activities, such as referring to ounces of cocaine as “onions” or “zips,” and 3.5-gram narcotics transactions as “balls,” short for “8 balls,” or one-eighth ounce quantities of cocaine. In addition to cocaine, this investigation also resulted in the recovery of MDMA, morphine, and other controlled substances intended for distribution, digital scales used to weigh narcotics, and a machete.

The second indictment outlines the activity of the “Flores Group” — which was led by Hector Flores, also known as “Pito” — and charges 50 individuals with 226 counts for their roles in allegedly selling narcotics in Onondaga, Oswego, Oneida and Cortland counties, as well as downstate areas.

According to the Attorney General, the investigation also revealed the challenges narcotics traffickers faced during the COVID-19 pandemic, including allegedly finding secretive meeting places to conduct their transactions as normal spots, such as parking lots or shopping malls, were closed. In addition, traffickers allegedly often discussed a significant shortage of cocaine supply and complained about high prices from suppliers due to a “drought,” which resulted in the price of cocaine rising 40 percent more than typical illegal market prices. Flores and his network  allegedly sought to utilize the Postal Service to get around the pandemic restrictions and get cheaper cocaine from Puerto Rico to their networks in central New York, officials said.

The defendants also allegedly built custom trap doors in vehicles they used to transport these drugs and evade law enforcement. In one instance, Felix Jaquez was allegedly attempting to deliver drugs to David Fermin when he was pulled over. Investigators allegedly found 1.5 kilograms of cocaine inside a mechanical trap door in the glove compartment of the vehicle.

The following are local individuals charged in this week’s action by the state Attorney General. All are innocent until proven guilty: