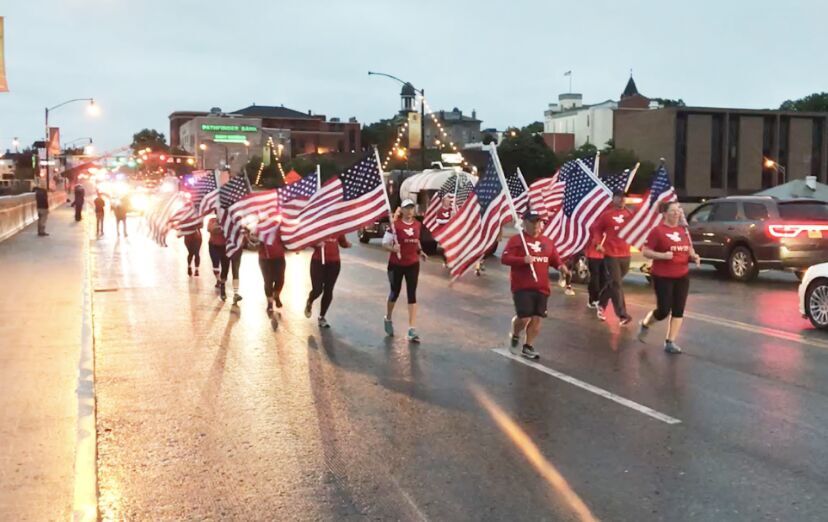 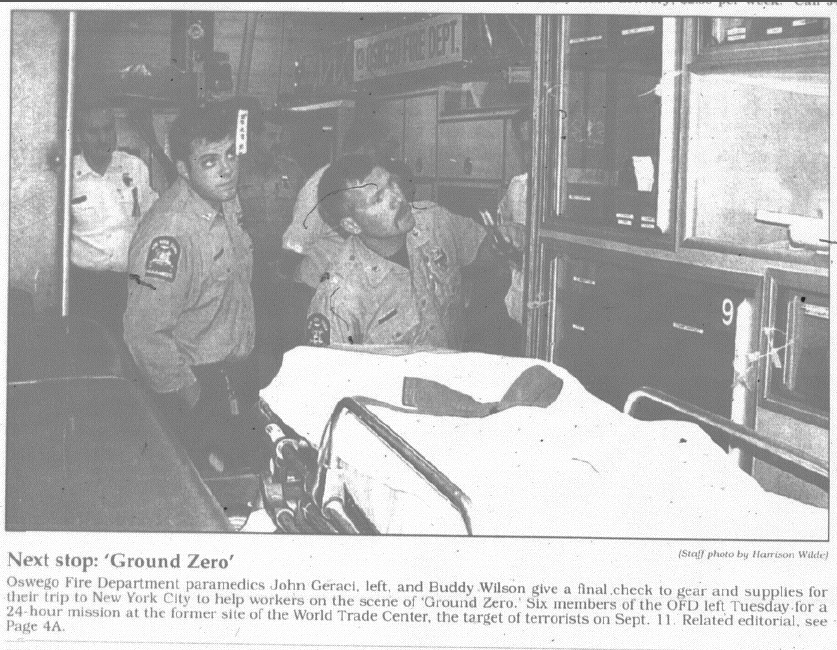 On Sept. 26, 2001, members of the Oswego City Fire Department, pictured above in this photo from the Sept. 26, 2001 edition of The Palladium-Times, travelled to the Big Apple to aid residents in the weeks following the Sept. 11 terror attacks.

OSWEGO — Sept. 11, 2001 is a day that will never be forgotten in the United States, and 20 years later the vivid memories of that fateful morning that changed the world remain.

As the people of the United States settled into their morning routines, 19 al-Qaeda terrorists hijacked four planes and crashed them into the World Trade Center in New York City, in addition to the Pentagon and a field in Shanksville, Pennsylvania, killing nearly 3,000 Americans and injuring many thousands more. The Sept. 11 attacks resulted in the longest U.S. war, permanently changed domestic and global travel and left a lasting impression on people from all walks of life.

The Palladium-Times spoke with several community members over the past week to offer differing perspectives of Sept. 11 and share their memories of the day that forever changed the nation and the world.

Oswego Fire Department (OFD) Chief Randy Griffin was working at the Dewitt Fire Department surrounded by emergency services personnel. Griffin said everyone in the group wanted to do something to help, adding as first responders you want to do your job “and try to save as many people as you can.”

Members of OFD did spring into action in the days that followed the Sept. 11 attacks. Retired OFD assistant chief Thomas Abbott said after watching the events unfold on television at the fire department, a crew from Oswego equipped an ambulance and traveled down to New York City in the weeks that followed.

Abbott, along with firefighters John Geraci, Brooks Hourigan, Thomas Amedio, Chris Chetney, Ray Wilson and Michael Cutro, who was in New York City training at the time, answered a statewide call for assistance to the Big Apple.

Abott described the drive down as “haunting,” and something he could never forget.

“It was pretty somber,” he said. “We had to find the command post — this huge building with thousands of people in it organizing the different aspects of the response. We found the EMS part and they dispatched us to Chelsea Piers.”

From Chelsea Piers, Abbott and the others were responsible for providing medical support to agencies responding to Ground Zero. While his squad never dispatched, Abbott recalled several experiences that elicited the  atmosphere of New York City at the time, including the amount of responding agencies in the then-desolate city.

“The most striking thing from the night we were there was the lines of fire departments, ambulances and police convoys heading to Ground Zero and coming back after helping some of the heroes there,” Abbott said.

Abbott said the whole city was on edge at the time, including the emergency response teams who worked tirelessly to rescue and prevent danger.

“While we were waiting by our ambulance, a bomb squad showed up and spotted a smoldering suitcase by the road. They told us to get some cover because they were going to blow it up. It was quite unique and scary,” Abbott said. “It gives you an idea of the tense state, everybody was looking behind their backs and worrying about the next shoe to drop.”

Garry Visconti, a retired U.S. Navy veteran and the 2019 Fulton Veteran of the Year, watched part of the Sept. 11 attacks unfold while delivering supplies to a grocery warehouse in New Jersey. Visconti, who initially heard of the events from a person at the warehouse, said the moments that followed were something he would never forget.

Visconti said he climbed atop his truck and watched as smoke rose into the sky after the first plane struck the north tower, and already overtaken with disbelief and confusion watched the second plane crash into the south tower.

“We could see the tower from where we were sitting and we saw the plane come in for the second tower,” Visconti said. “I wasn't sure what was going on. At that time no one knew it was an act of terror and I just thought about the people there.”

Visconti drew comparisons to the terror he saw decades earlier serving in the first Gulf War, and noted his hope was that everyone was safe.

Visconti recalled the world coming together following the attacks, noting on his attempt to leave New Jersey the roads were filled for miles with emergency service agencies sending aid to the city.

Larry Macner, a Fulton Common Council and retired Air Force veteran, was on a jet bound for Syracuse’s Hancock International Airport from Saudi Arabia when the Sept. 11 attacks occurred. Macner had just completed a 30-day deployment in support of operation Southern Watch — a military operation monitoring the airspace around southern and south-central Iraq, according to the United States Department of Defense — and was excited to return.

“All the celebrations from being able to go home, all of a sudden, everything changed,” Macner said about his feelings upon hearing the news. “Our aircraft commander came over the aircraft speaker and said one of the Twin Towers were hit. (My group) were all aircraft maintainers and so we initially thought there was an aircraft malfunction.”

Macner’s flight was rerouted to the Gardner Canadian Forces Base in Canada, where his crew stayed for several days awaiting American airspace to re-open, he said.

“Aircraft were parked all over the place. It was just unreal to see all these big jets on such a small airport,” Macner said, noting more than 30 planes filled the airfield.

It wasn’t until the next day that Macner would be exposed to the previous day’s carnage, describing the scene in the small church where he learned of what happened as so quiet “you could hear a pin drop.”

“It was something, I will never forget, Macner said. “That was our modern-day pearl harbor.”

“I distinctly remember the two buildings standing when the first class was in place,” Shaw said. “As classes changed and a new group came in, the first building went down and then, in the next class, the second building followed.”

Shaw said he heard the news of the plane crashes in New York City from the main office, which at the time urged the staff to divert from instruction and turn on the television to focus on the unfolding travesty.

“After we turned the news on school stopped and the news took over,” Shaw said, noting the atmosphere in the classroom was that of disbelief and confusion as the vents unfolded.

Shaw said the devastating attacks later served as a teaching point for students, noting it became far more important to discuss the events and how it impacted Americans and the globe.

Oswego Mayor Billy Barlow, who was a nine-year-old student at the time, said the morning of the attacks he was unaware of the events but had a feeling something bad was happening. Barlow recalled sitting in a classroom during a lesson when another teacher came in and whispered to his teacher, presumably about the attacks.

“We didn't watch the attacks live, but as the day went on, we obviously heard bits and pieces of what was taking place,” Barlow said. “As a young kid, it was hard to comprehend and process what I was watching but I knew it was tragic, devastating and evil.”

Barlow said some of his strongest memories are from the days that followed the attacks, recalling walking to school and seeing flags on each home.

“I had never seen that before and that sight, that impression, feeling the way the rest of the country felt in the days following the attacks, had a profound impact on me,” Barlow said.